Economy of the state is mainly depended upon agriculture, minerals and industry. Diamond, bauxite, limestone, copper, lead, coal, etc. are available in the state. The regions like Bastar, Jabalpur, Gwalior are famous for high quality iron ore. The Panna region is famous for diamond.

Heavy electricals, textile machinery, newsprint, drugs, synthetics, refractories, automobiles, chemicals and fertilizers, etc. are some of the industries in the state. Infact, mines and industries play a major role in the economic development of the state. Many developing textile mills are there in Madhya Pradesh. Bhilai Steel Plant is one of the major steel plants in the country. There is a diesel plant at Indore. Gwalior is famous for carpet production.

Wheat, rice, pulses, cotton, sugarcane, oilseeds, jowar, soyabean, etc. are some of the agricultural products in the state. About 75% of the people of the state are engaged in agriculture.

The economy of any country is strongly governed by industrial development. India is growing at a great pace in all fields and competing with developed nations. When evaluating the businesses of Madhya Pradesh which is located in central India, many companies are established and all these have easy access to the main end user markets and big cities for example Delhi, Mumbai, Kolkata and Chennai. This is beneficial for industries of Madhya Pradesh and serves as a manufacturing base for a range of consumer products.

Madhya Pradesh also provides various monetary and policy incentives to run businesses successfully under the Industrial Promotion Policy - 2010 & Action Plan. Furthermore, the state has devised numerous policies for other sectors like information technology, biotechnology, tourism and in particular, economic regions. Madhya Pradesh has made parallel growth and has penetrated in the field of advanced technology industries such as electronics, telecommunications, and automobiles.

Madhya Pradesh has also set up industries to offer optical fibre to meet out the requirement of the telecom sector. Pithampur is the main industrial area near Indore where an array of automobile industries have been established. Major industries like An air cargo Complex, Indo-German Tool Room and an Inland Container Depot are being established at Pithampur. 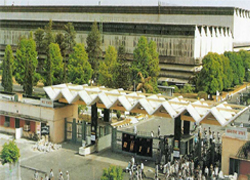 Bhopal, capital of Madhya Pradesh is the main hub of top industries in the public sector namely Bharat Heavy Electricals Ltd. Another important city of industrial and commercial companies is Mandideep near Bhopal which offers job opportunities for technical and nontechnical experts. Industries such as Security Paper Mill located at Hoshangabad, Bank Note Press is set up at Dewas near Indore, Newsprint Factory at Nepanagar and Alkaloid Factory at Neemuch.

All these industries generate huge revenues and contribute a lot towards the economic development of the state.Madhya Pradesh is a champion in producing cement which is a very important construction material. Madhya Pradesh has a major advantage of its central location in India.

There are plentiful of natural places that appeal to visitors and due to increased travel and tourism, the state enhances its economy. Madhya Pradesh also generates profit through its wildlife sanctuaries.

The state has many attractions for visitors as it has well preserved medieval cities; the calm attractiveness of Pachmarhi, the dazzling majesty of Marble Rocks and the deafening sound of Dhuandhar Fall at Bhedaghat in Jabalpur, the Kanha National Park, with its exceptional Barasingha and the Bandhavgarh National Park with its primitive caves and wildlife. These places contribute to increase in revenues for the state.