Life is experienced in a laidback manner at a slow, leisurely pace in cities like Bhopal, Indore, Gwalior and Ujjain as people are used to doing things in an orderly, time consuming manner.

Except for few towns, most of the districts are yet to be developed and they are inhabited by tribal people.

There are in all 45 districts and 23 of them are primarily tribal dominated.

But rest of the districts are under stages of industrial progress with gradual modification of people's lifestyle.

Apart from the tribal community, Hindus form the major part of MP's population.

There are pockets of areas with Parsis, Jains and Muslims living for centuries across the state located in the exact central part of India.

The geographical aspect of the region has been a prominent decider on the distribution of communities in the state.

The tribes that have been living in the state from olden times are distributed along the Vindhyas range of mountains.

Hence, this natural shelter makes them impervious to any outside intrusions.

This mountain barrier helped the tribes to maintain their culture and customs with any outside influence till the present day.

The most prominent tribes in MP are Gonds, Bhils, Bhilals, Korkens and Kols.

They are engaged in a number of vocations to earn their livelihood.

Earlier they were semi-nomadic people but most of them have now settled down and have chosen their occupation.

The Khaiwas and the Panikas are into agriculture whereas occupation of Mangetri Pradhans is singing and dancing.

Some tribes have slowly moved to the outskirts of the developed areas to find more rewarding profession.

They generally work in shops, as street hawkers or as factory workers.

Each tribe has its own set of customs and peculiar beliefs which are followed without deviations.

The most prominent being the custom of Ghotul. This ritual is for unmarried boys and girls of Muria tribe.

The Ghotul is a kind of a hut or a group of huts where these young kids gather after sunsets.

Here they are taught about the moral values and discipline that one should have.

They indulge in many fun activities that also turn out to be educational.

This has become an important tool in shaping the lives of people of Muria tribe.

Many tribes follow the Hindu rituals for performing marriage, death and birth ceremonies, while there are some who abide by their own set of traditional practices.

For marriage, tribes like Bhils and Bhilalas have a peculiar method.

People choose their spouse in a festival fair called Bhagoriya.

If both the bride and groom are willing for the marriage, they elope from their house and live together.

Only afterwards when they return to the village, they are accepted as husband and wife by the society.

Due to the varied linguistic, cultural and geographical environment, and its peculiar complications, the diverse tribal world of MP has been largely cut off from the mainstream of development.

MP ranks very low on the human development index (HDI) with a value of 0.375 (2011) which is below the national average.

According to the India State Hunger Index (2008) compiled by the International Food Policy Research Institute, the malnutrition in MP was "extremely alarming", receiving a severity rating between Ethiopia and Chad. 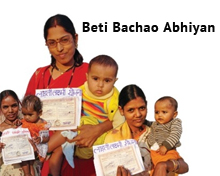 MP is the worst performer in India when it comes to female foeticides.

On October 6, 2011, CM Shivraj Singh Chouhan launched the much-hyped 'Beti Bachao Abhiyan' all over the state with a pledge to protect girl child.

Three years later, after spending crores of rupees in posters, banners and advertisements, MP has topped the country in incidents of foeticide in 2013 as per the national crime records bureau (NCRB).

Even a Beti Bachao Rath (save girl child chariot) was launched to propagate the scheme.

Instead of the number of cases going down, the incidents of female foeticide have doubled between 2011 - when the Beti Bachao Abhiyan was launched - and 2013.

A total of 217 cases of female foeticide were reported in the country.

MP is lagging far behind even from the states like Haryana (21 cases) and Rajasthan (34 cases) which were infamous for foeticide.

Crime rate continues to be high in Madhya Pradesh as it retains the top position as a state where the largest number of rapes is committed.

The data released by the National Crime Record Bureau in 2013 show that while rapes have increased, rape among children have also been on the rise.

Madhya Pradesh emerged as the state with the highest crime rate against the elderly and the incidents of crime against children in the country, the latest national crime data show.

According to the "Crime in India 2014" report published by the National Crime Records Bureau (NCRB), Madhya Pradesh has a crime rate of 60.2 - the ratio between crime committed and the population in a given area - against the elderly compared to the national average of 18.3.

The report said MP recorded the highest incidents of crime against children in the country with 15,085 cases reported in 2014.

According to the Census, a person of 60 years and above is defined as a senior citizen while a child is anyone under the age of 14.

The data showed that 3,438 crimes were committed against senior citizens in Madhya Pradesh in 2014.

The total cognisable incidents of crimes against senior citizens in the country stand at 18,714 in 2014.

While Madhya Pradesh accounts for only 5.4% of the elderly population in the country, it accounts for 18.3 % of the crimes committed against them.

According to NCRB, 116 senior citizens were murdered in Madhya Pradesh in 2014.

Senior citizen were victims in 39 cases of attempt to murder, 5 cases of rape and 89 cases of robbery, the data showed.

The elderly group has also emerged as being the victim in 53 cases of cheating.

Senior citizens in MP have been victims in 485 cases of assaults, besides 2,889 other cases under the India Penal Code.

The total incidents of crimes against children in the country add up to 89,423.

While Madhya Pradesh accounts for 6.7% of the children's population of the country, the state accounts for 16.9% of the crimes committed against them. 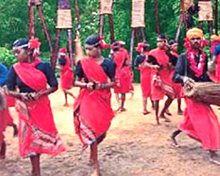 Most of the tribal districts have very little modern amenities, but they are rich in natural scenery.

The tribes are mostly innocent and live in a very subdued environment with not much social interaction with the outside world.

But they are excessively developed in their hearts. The people are warm, caring, and very welcoming.

For visitors living in fast-paced metro cities, a typical MP village will be an eye-opening experience to a way of life that is contended and peaceful without the chaos of the modern society.