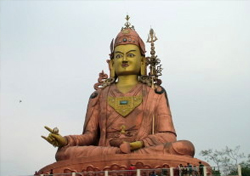 The original inhabitants of Sikkim are known as Lepchas.

Buddhist saint Padmasambhava (8th century) more popular as Guru Rinpoche was the first one to have mentioned Sikkim in his travelogue.

Rinpoche introduced Buddhism to Sikkim people and further predicted that monarchy will rule this landlocked region for centuries. 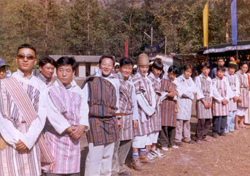 Following a divine revelation, Khye Bumsa, a 14th century prince from the Minyak House in Kham, Tibet, came down to south in search of wealth.

But generations passed before Sikkim could get a royal dynasty. It was left to Phuntsog Namgyal, the 5th generation descent of Khye Bumsa, set up the Sikkim monarch in 1642.

Phuntsog was consecrated as first Chogyal (priest-king) of Sikkim by three respected lamas at Yuksom.

Phuntsog was succeeded in 1670 by his son Tensung Namgyal who moved the capital from Yuksom to Rabdentse (near modern Pelling).

In 1700, Sikkim faced its first invasion by the Bhutanese who were encouraged by the half-sister of the Chogyal (Tensung Namgyal)as she was denied the throne.

However, the Tibetans restored the throne to the Chogyal ten years later after driving the Bhutanese out of Sikkim.

In 1791, China marshalled its troops to support Sikkim and defend Tibet against the invading Gorkha Kingdom of Nepal.

Following the defeat of Gorkhas, the Qing dynasty from China established its firm control over Sikkim.

Sikkim during the British Raj

In order to fend off its arch foe Nepal, the Sikkim monarchy allied with British India.

But the Nepalese army once again invaded Sikkim and annexed large parts of its territory including the Terai region.

This invasion forced East Indian Company to attack Nepal which resulted in the Gorkha War of 1814.

A number of treaties were signed between Sikkim and Nepal which led to the latter returning large chunks of land annexed by the Nepalese army in 1817.

But the relationship between Sikkim and British India turned worse due to the taxation of the Morang areas by the colonialists. 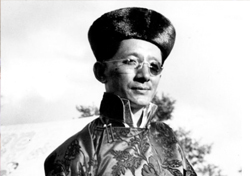 In 1849, two British physicians -- Sir Joseph Dalton Hooker and Dr.Archibald Campbell who was taking care of British relations with Sikkim -- forayed into the mountains of Sikkim without any official permission.

The duo was arrested by the Sikkim monarch.

In a strong retaliation, the British army raided Sikkim and in the process, Darjeeling district and Morang were annexed to British India in 1853.

The British India invasion made the Chogyal of Sikkim a titular ruler under the directive of the British governor.

In 1890, Sikkim became a British protectorate and was granted more sovereignty over the next three decades.

In 1947 when India got Independence, a popular vote rejected Sikkim's joining the Indian Union.

However, a treaty was entered into between India and Sikkim in 1950 making the latter an Indian protectorate.

Sikkim came under the total control of India which took care of its external affairs, defence, diplomacy and communications.

But the Himalayan kingdom retained its administrative control.

A state council was formed in 1953 to usher in a constitutional government under the Chogyal. 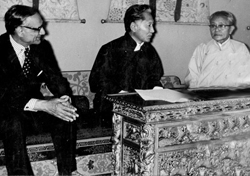 Palden Thondup Namgyal, the Chogyal at the time, proved to be extremely unpopular with the people.

As a result, in 1973, riots in front of the Chogyal's palace led to a formal request for protection from India.

In 1975, the Sikkim Prime Minister appealed to the Indian Parliament for merger with India.

In April 1975, the Indian Army trucks and armoured brigades rolled into Gangtok and disarmed the Chogyal's palace guards.

A referendum was held in which 97.5% of voters supported abolishing the monarchy and approved the union with India.

The union of Sikkim with India was presented as the will of its people by the Indian authorities.

But the merger was criticised by some countries as an annexation by India.

Further, India was slammed for exploiting the ethnic divide and rigging the referendum in Sikkim. 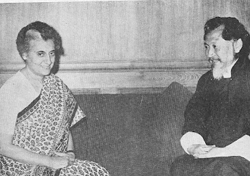 On 16 May 1975, Sikkim became the 22nd state of the Indian Union, and the monarchy was abolished.

To enable the incorporation of the new state, the Indian Parliament amended its Constitution.

First, the 35th Amendment laid down a set of conditions that made Sikkim an ‘Associate State’, a special designation not used by any other state.

The name of the state was added to the First Schedule of the Constitution.