Uttarakhand is both the new and traditional name of the state that was carved out of the hill districts of Uttar Pradesh. Literally called 'North Country' in Sanskrit, the name of Uttarakhand finds mention in the early Hindu scriptures as the combined region of Kedarkhand and Manaskhand. 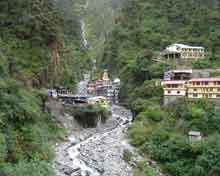 Uttarakhand was also the ancient Puranic term for the central stretch of the Indian Himalayas. Its peaks and valleys were well known in ancient times as the abode of gods and goddesses and source of the Ganges River. Today, it is often called "the Land of the Gods" (Dev Bhoomi) because of the presence of a multitude of Hindu pilgrimage spots.

Uttarakhand is known as Dev Bhoomi from ancient times. The Pauravas, Kushanas, Kunindas, Guptas, Katyuris, Palas, the Chands, and Parmars or Panwars and the British have ruled Uttarakhand in turns.

The Himalayan region was originally inhabited by Kols, an aboriginal people of the Dravidian stock.The Kols were later joined by Indo-Aryan Khas tribes from the northwest during the Vedic period. During the Vedic period, the region of Uttarakhand also served as a haunt for rishis and sadhus.

According to legend, Sage Vyasa scripted the Mahabharata here as the Pandavas are believed to have travelled and camped in the region. Among the first major dynasties of Garhwal and Kumaon were the Kunindas in the 2nd century BCE who practised an early form of Shaivism.

They traded salt with Western Tibet. It is evident from the Emperor Ashoka edict in Kalsi near Dehradun in Western Garhwal that Buddhism made inroads in this region. Folk shamanic practices deviating from Hindu orthodoxy also persisted here.

However, Garhwal and Kumaon were restored to nominal Brahmanical rule due to the preaching of Adhi Shankaracharya and the arrival of migrants from the plains. In the 4th century, the Kunindas gave way to the Naga dynasties. 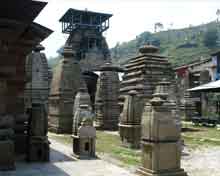 Between the 7th and 14th centuries, the Katyuri dynasty of Khas origin dominated lands of varying extent from the Katyur (modern day Baijnath) valley in Kumaon. Other peoples of the Tibeto-Burman group known as Kiratas are thought to have settled in the northern highlands as well as in pockets throughout the region, and believed to be the ancestors to the modern day Bhotiya, Raji, Buksha and Tharu peoples.

By the medieval period, the region was consolidated under the Garhwal Kingdom in the west and the Kumaon Kingdom in the east. From the 13th-18th century, Kumaon prospered under the Chand Rajas who had their origins in the plains of India.

During this period, learning and new forms of painting (the Pahari school of art) developed. Modern-day Garhwal was likewise unified under the rule of Parmar or Panwar Rajas, who along with a mass migration of Brahmins and Rajputs, also arrived from the plains.

The eastern Garhwal and Kumaon were ceded to the British as part of the Treaty of Sugauli after the defeat of Gurkhas (Nepalis) by the British forces.

After the country got Independence, the Tehri princely state was merged into Uttar Pradesh state. The region of Uttarakhand , as it was called then, composed of the Garhwal and Kumaon divisions. Until 1998, Uttarakhand was the name most commonly used to refer to the region. 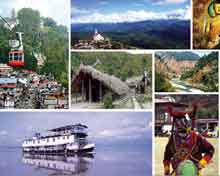 It should be noted the erstwhile hill kingdoms of Garhwal and Kumaon were traditional rivals with diverse linguistic and cultural influences. However, the proximity of different ethnic groups, the inseparable and complementary nature of their geography, economy, culture, language and tradition created strong social bonds between the Garhwal and Kumaon regions.

These bonds formed the basis of the new political identity of Uttarakhand since 1990s. The new found unity among Garhwal and Kumaon regions gained significant momentum in 1994. During this period, the demand for separate statehood (within the Indian Union) got wide acceptance among the local populace as well as political parties.

Most notable incident during this period was the Rampur Tiraha firing case on the night of October 1, 1994, which led to public uproar and revolt against the UP police. The massive public protest in Uttarakhand region led to the division of the state of Uttar Pradesh in 2000.

The term Uttarakhand came into use when the BJP-led central and Uttar Pradesh state governments initiated a new round of state reorganization in 1998 and introduced its preferred name. 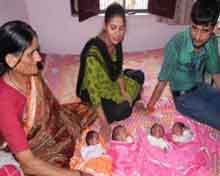 Chosen for its allegedly less separatist connotations, the name change generated huge controversy among the statehood activists who saw it as a political act. However, they were not quite as successful as Jharkhand state that successfully thwarted a similar move to impose the name Vananchal.

Legislation to that effect was passed by the legislative Assembly in October 2006. The Union cabinet brought in the bill in the winter session of Parliament. The bill was passed by Parliament and signed into law by the President in December 2006.

From January 1, 2007, Uttarakhand came into usage and the hill state comprising Garhwal and Kumaon regions finally got a name that truly reflects its heritage and cultural past.