History of Punjab is very versatile, as it had been subjected to different invasions. History speaks volumes of valour, courage and bravery of the people of Punjab. Early studies prove that Punjab included much of the present region of Pakistan. The history of Punjab has undergone turbulent changes as a result of many invasions.

Punjab has its earliest reference in the Indus Valley civilization. Rig-veda, one of the early texts has references to the province of Punjab. Kambojas, Kaikeyas, Madras, Pauravas, Yandheyas were referred to as brave clans of Punjab.

One of the earliest invasions was that of Persia in the year 558 BC by king Cyrus. Persian invasion had introduced several changes in the socio-economic arena. Alexander with his huge army from Greece invaded the province of Punjab. Although Alexander was a great warrior, he found it difficult to combat with Punjab warriors. In the year 322 BC, Mauryan Empire under ChandraGupta Maurya established its hold over this region. Buddhism prevailed under Asoka’s rule. The Mauryan Empire was succeeded by Sakas in 125 BC. Sakas were prominent rulers of the province having a great impact on the social set-up of the society.

Many dynasties followed the Sakas, but did not rise to importance. In 45 CE Kushanas came to power in Punjab. Muslim invasions followed the Kushana dynasty. These invasions brought in a lot of unrest among the people. The Mid 9th century saw the rule of Hindu Shahi dynasty. In 1206, Quitb-ud-din Aibak formed the Sultanate of Delhi which extended up to Punjab. After the Slave dynasty many invasions followed. People were unhappy and there was religious turmoil until Sikhism evolved. Guru Nanak Sahib preached oneness putting an end to many discords. 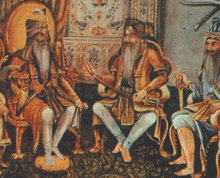 Maharaja Ranjit Singh an ardent follower of Sikhism proved to be a promising leader in all aspects. At the request of people of Lahore, he invaded Lahore. Ranjit Singh’s kingdom extended from Sutlej in the east to Peshawar in the west. His successors governed Punjab until the British laid its hands on it in the year 1848. Punjab proved very alluring to the British.

British rule brought in lot of unrest in the province among religious sects. The Jallianwala Bagh massacre in 1919 was the ultimatum. People rose against the British governance. Prominent freedom fighters included Bhagat Singh, Lala Lajpat Rai, Udham Singh. When India achieved freedom from the British, Punjab was formally partitioned . Though large areas has been partitioned into Pakistan, Punjab has emerged as the “Golden State of India” over the years.

Punjab despite its turbulent history has emerged as true winner in all arenas.