Most of the cities and towns in Punjab are well-connected by an extensive road network which helps farmers to transport their agriculture produce to urban centres in double quick time.

Public transport is provided by buses, auto rickshaws, Indian railways and an international rail connection to Pakistan (Samjhauta Express). The state has a large network of multimodal transportation system which contributed much to the wealth generation in rural Punjab.

All the cities and towns of Punjab are connected by four-lane national highways. The Grand Trunk Road, also known as NH1 connects Kolkata to Peshawar passing through Jalandhar and Amritsar.

Ludhiana and Amritsar cities among several Indian cities have highest accident rate in India. There are also the bus rapid transit systems like Amritsar BRTS and Ludhiana BRTS in cities of Amritsar and Ludhiana respectively.

In the 2015-16 budget, the state government proposed to invest $334.77 million for the development of road infrastructure in Punjab. Along with this investment, an amount of $497.67 million has been proposed by the government for the improvement of national highways.

Road type and its length: 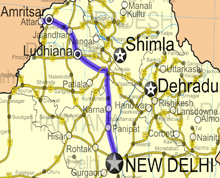 The railways play a critical role in the state, connecting major industrial units in the oil refining, cement, fertiliser, thermal power and manufacturing sectors to suppliers and markets.

In March 2015, the state government announced plans to establish a joint venture with Indian Railways. The purpose behind this joint venture is to enhance the planned rail projects in the state as well as to take up new projects, including setting up of ultra-modern railway stations and laying new railway tracks.

Amritsar is the largest railway station having trains connecting to all major cities. The Shatabdi Express connects Amritsar to Delhi. The railway junction in Bhatinda is the largest in Asia.

The Samjhauta Express is a joint venture between Indian Railways and Pakistan Railways and runs from Attari railway station near Amritsar in India to Lahore Railway Station in Punjab, Pakistan.

Ludhiana Metro is a proposed rapid transit system for the metropolitan city of Ludhiana.

Punjab has five civil airports. The Sri Guru Ram Dass Jee International Airport in Amritsar is the largest and most important airport in the state and is also the second busiest in North India after Delhi Airport.

Other airports in Punjab are in Bathinda, Pathankot, Patiala, Sahnewal and Chandigarh. The aircraft movement from Chandigarh airport has increased from 9,690 in 2013-14 to 10,968 in 2014-15. 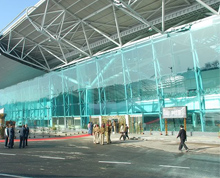 The Punjab Energy Development Agency (PEDA) is the nodal organisation for renewable energy development in the state. The state government has announced plans to install two thermal power plants with 660 MW capacity each in the state.

Both plants are expected to be operational by the end of 2015. Punjab had achieved 100% village electrification as of March 2014. The state government is continuously focusing on the usage of renewable sources of energy.

According to the Telecom Regulatory Authority of India (TRAI), Punjab telecom circle had 30.60 million wireless subscribers and 1.130 million wire-line subscribers as of May 2015. The tele-density in the state was 104.72%, significantly higher than the national average of 78.73% as of February 2015.