Punjab society is at crossroads. On one hand the rural side is facing problems like declining farm productivityand unemployment, while those in the urban clusters run into despair as the government is turning a blind eye to their aspirations.

Due to the vagaries of monsoon, farmers' suicide is common in Punjab. Farmer suicide is not a new thing in the state. A Punjab government survey report says 5,000 farmers and farm labourers committed suicide in Punjab between 2000 and 2010, which means three suicides every two days.

Bathinda, Sangrur and Mansa are the most severely affected districts of state. Besides farm woes, the spate of drug addiction by the youths and the unemployment crisis have crippled the economy of the state. 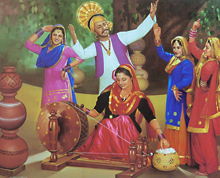 While the state government plays down the impact of drug menace in the society, the civil rights groups, NGOs and the opposition fear Punjab is heading towards an abyss due to its loss of youth energy.

Punjab is one of the few industrialised states that had fully leveraged its agriculture to make its farmers wealthy in a short duration.

Agriculture in Punjab suffers from mono-crop culture of mainly wheat and paddy. With this cropping pattern, farming itself is becoming an unviable occupation, due to rising fixed and variable input costs, and low remuneration leading to falling profit margins.

For a small and marginal farmer, it is economically unviable to meet the rising investment cost. Mostly, they borrow from informal sources at high rates of interest (18-36%).

Production levels in the state have already touched the saturation point and productivity cannot be increased further by intensive use of inputs. The government is very much aware of the agrarian crisis and rural suicides.

If an adequately remunerative MSP for crops other than wheat and paddy is not provided, why would the farmer risk switching to other crops? Price stability, marketing facilities and assurance of the crop sale are the basic arrangements farmers expect from the government before they undertake crop diversification.

The problem of drug abuse among the youth in Punjab, one of India’s wealthiest states, is fast becoming an epidemic. The local government had estimated in 2009 that two-thirds of all rural households in Punjab had at least one drug addict.

A study by a state university claims that almost 70% of young men are addicted to drugs or alcohol. Punjab has had a drugs problem for many years, but the fear is that things have recently become much worse.

All sectors of society have been affected, including ones the least expected. There was a time when there was prosperity in this state; people were so energetic doing things and trying new things.

But this is now in such a sad state. The demographic profile of Punjab has changed for worse. It’s as if the state is sitting on a time bomb that can explode at any time. The drugs problem is Punjab has been rooted in several factors – economic, political, geographical and social – each contributing in their own way – to destroy the fabric of the state.

While Punjab is one of the wealthiest parts of India, its high unemployment rate, slowing economy and proximity to Pakistan and Afghanistan make its young men highly vulnerable to addiction to illegal narcotics, particularly opium, hashish and heroin.

In the past two decades, Punjab has become a principal smuggling route for drugs from Afghanistan. While the drugs are ultimately destined for Europe, much of the products have found an eager market in India.

The magnitude of the problem can be understood from a report in the Washington Post that the town of Maqboolpura, outside Amritsar, near the Pakistan border, has been so devastated by the deadly scourge of drug abuse that it has earned the sobriquet “the place of widows".

Experts aver that poor quality of education in schools and colleges make the Punjabi youths unfit for skilled jobs. Unable to get the jobs they aspired for, youths feel let down and take recourse to drugs and other social evils to vent their frustration.

CM Parkash Singh Badal has approved new courses and curriculum to be offered to nearly 15,000 youth desirous of seeking skill development training in the various streams annually so as to empower them to be gainfully employed. 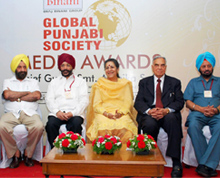 Sharing a rich legacy, the people of Punjab are warm, friendly and hardworking. While Sikhs are in the majority, there are sizeable Hindus and Muslims too, all of whom co-exist amid a rich exuberance of wealth and revelry that are reflected in their festivals.

Dance and songs are very much compulsory during get-togethers and festivals. The festivals of Punjab make the culture more interesting. Bhangra is one of the most famous dance forms of Punjab.

With the loud drumming of the dholak, people dance with zeal to the tunes of the music. Giddha is another important variant of dance practised by Punjabi women. Boliyans are lyrically sung and danced by women.

Other popular dance forms are Jhumar, Dhankara and Gatka. Irrespective of age or religion, Punjabis love to dance and enjoy themselves to mark festivity. Folk music is the soul of Punjabi culture. Folk music comprises of simple musical instruments like dholak and dhol drum. Punjabi music relates to the zestful people of Punjab.

Bhangra is a popular music form of Punjab. Boliyans are sung and music is played in tune with the lyrics. Punjabi songs at the wedding range from emotional interludes to very peppy beats, where there is a constant chiding of the bride and groom.

A sense of humour is essential to enjoy the wedding songs.

Living together with extended families (joint family system) has been in vogue for ages in Punjab. The entire responsibility for the maintenance of the household and of social relations falls upon the male elderly members.

At home the head of the family inspires awe among the members. Younger members of the family dare not joke in his presence, nor is it considered befitting for them to smoke or drink when he is around. All conversation in his presence is conducted in subdued voices. Daughters-in-law observe purdah (covering the face with fine fabric) when the father-in-law is present.

It is generally understood that when he comes into the house, he would either cough aloud, or indicate in some other way that he is around, so that they may cover their faces and tone down their voices. 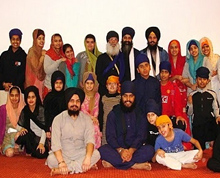 Purdah is observed before the husband's elder brother also. The same customary respect as is shown to the father-in-law is also shown to him. But the younger brother of the husband, the devar, enjoys a privileged position. He is free to talk, laugh and joke with the bhabhi (brother's wife).

Among some clans, there is a custom that when the bride is brought home, the husband's younger brother is the first person who lifts her veil and peeps at her face. The equation between devar and bhabhi is very informal.

But in certain clans the eldest bhabhi is given a status equal to that of the mother and she is treated with great respect. In Malwa district, where the devar generally marries the widow of the elder brother, the relationship is very free.

Practical jokes and broad jests are resorted to very liberally. In the folk songs of the Punjab, there are many references to this type of relationship between devar and bhabhi.

The offended mother-in-law in her outburst does not spare even the parental family of the daughter-in-law. The sisters of the husband sadistically add fuel to the fire. However, although the position of the wife varies in different societies, the mother occupies a very respectable position everywhere in the Punjab.

Relations among brothers are often friendly and cordial. They are always out to help one another. The elder brother generally commands the same respect as is given to the father. But a great change comes in this behaviour when the brothers get married and their wives start wrangling on petty matters.

Domestic quarrels often disturb the integrity and peaceful life of the family. Over the distribution of ancestral property sometimes the filial love and respect change into life-long enmity. 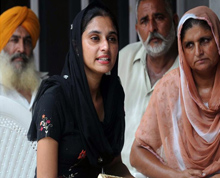 On an average, about four women in the state were molested daily, while four others were harassed on the pretext of dowry every day in Punjab. As per the data, a total of 597 rape cases were reported across Punjab, besides 826 cases of molestation and 1,054 dowry cases during 2015 till August 31.

Apart from this, there are an equal or perhaps more number of cases that go unreported due to several reasons. The figures, though witnessed a dip from the previous years, sends an alarm bell ringing over the state of affairs in Punjab as far as womenfolk are concerned. The statistics were more shocking with just about 0.3% conviction rate in the reported rape cases.

Out of the total 597 cases, the conviction was done in only 29 cases. Besides, convictions were held in 11 cases out of total 826 molestation cases, and just three out of whooping 1,054 dowry cases. In the recent past, the state has witnessed a rise in crime against women ranging from gang rapes or rapes to sexual harassment.

The figure may be just the tip of an iceberg as numerous other cases were either not highlighted by the media or went unreported for various reasons. The data reveals that as many as 3,146 rape cases — three every day — have been registered in the past three years from 2012 till 31 August, 2015. Shockingly, the conviction was held in just 595 cases — at the rate of 0.2%.

In an attempt to curb the crime against women, the Punjab government had initiated several steps that seem to have proved ineffective so far.

The government has launched ‘181’ police helpline and issued special instructions to the senior police officials to deal with women related crimes on priority.

Punjab will be setting up Women Armed Special Protection Squads (WASPS) and Sexual Assault Response Teams (SARTS) in all districts and police commissionerates.

The special mobile women squads have been constituted in districts with the available strength of women police officials covering the educational institutions and other identified sensitive areas on random basis.

Duly notified women police stations are functioning in at district level in Amritsar, Jalandhar, Ludhiana, Patiala and Bathinda to exclusively deal with crime against women.

In addition, women cells have been established under SP’s supervision in all districts and police commissionerates.