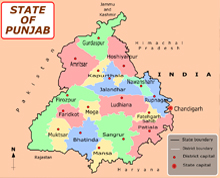 Rivers like Sutlej, Ravi, Ghaggar and Beas are the major rivers that flow through the state. Shiwalik Range, Hoshiarpur Choaland, Chandigarh Choaland are the major mountainous areas in the state.

Annual rainfall in the state stood at 915 mm.