One of the northernmost states Punjab borders Pakistan to its west and is known for high productivity of principal crops of India. Sikhs are the majority in this state which is prosperous with overflowing granaries thanks to its hardworking people.

The confluence of five rivers makes Punjab’s agricultural land rich and productive. Nearly 82% of the state’s land is under cultivation compared with the national average of 40%. Punjab's fertile and productive soil has accorded it the status of 'Granary of India' and the 'Bread basket of India'.

Occupying only 1.5% of India's geographical area, the state accounts for about 17% country's wheat production and 11% of rice production. With the practice of high-tech farming and growing yield per hectare, Punjab has enormous potential for agro-based industries, dairy development and other food processing units. 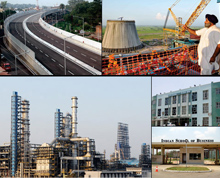 Punjab emerged as a key hub for textile-based industries including yarn, readymade garments and hosiery. With the development of apparel parks, favourable textile policy and other incentives for the creation of textile infrastructure, the state offers opportunities for investment.

The average GSDP growth rate of Punjab was about 10.32% between 2004-05 and 2014-15. The state provides investment opportunities in sectors such as textiles, agro-based industries, IT and ITeS, automotive and auto components, sports goods and light engineering goods.

The following are some of the major initiatives taken by the government topromote Punjab as an investment destination: 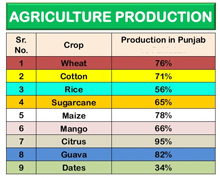