Caught in a grip of terror strikes by armed militias and rebel groups demanding sovereignty, Manipur finds it difficult to attract investment in the region due to spiralling ethnic violence.

Moreover, the industrial houses from the mainland don't foresee this north-eastern state emerging as a favourable destination for industrial growth as social peace is not assured in this volatile region. 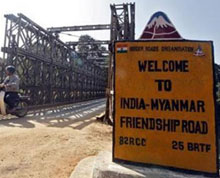 Despite having tremendous potential as gateway to south-east Asia with near open borders with Myanmar, commercial activity is yet to pick-up at trans-border sites.

However, with abundant natural resources such as verdant hills and plenty of rivers, Manipur holds much promise in traditional cottage industries and tiny village based units that are critical to provide employment.

With about 3,268 sq. km of area covered by bamboo forests, Manipur is one of India's largest bamboo producing states and a major contributor to the country's bamboo industry.

Manipur has the advantage of acting as India's "Gateway to the East" through Moreh town -- the only feasible land route for trade between India and Myanmarand other Southeast Asian countries.

The Ema Bazaar is one of India's largest markets run by women.

This market primarily sells handloom and handicraft products such as earthen pots, knives, shawls and puppets, besides all kinds of dried fish and vegetables. 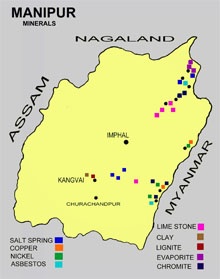 The Manipur Food Industries Corporation Ltd is the implementing agency.

The park will host 49 food processing units for which common facilities will be provided.

The total project cost is estimated to be $5.3 million.

The construction of the two buildings is completed.

The government has invited an expression of interest from investors, units or organisations who are willing to set up an industrial unit within the proposed centre.

Handloom is the largest cottage industry in the state. Manipur ranks among the top five states in terms of number of looms in the country. Manipur has around 40 active handloom production centres.

Most of the silk weavers, famous for their skill and intricate designing, are from Wangkhei, Bamon Kampu, Kongba, Khongman and Utlou. A mega handloom park will be developed at Imphal East district's LamboiKhongnangkhong under the sponsorship of the Union ministry of textiles. 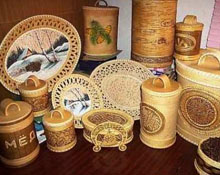 Handicrafts is another important industry in Manipur. It has its own unique identity amongst the various crafts of the country.

Since cane and bamboo are abundantly available, basketry is a popular occupation of the people of Manipur. Pottery flourishes in Andro, Sekmai, Chairen, Thongjao, Nungbi and parts of Senapati districts.

Cane and bamboo crafts, kauna crafts and pottery have high investment potential in the state. There are altogether 98,051 handicrafts units in Manipur providing employment to 3,79,998 artisans as on August 2014.

Manipur has four varieties of silk: mulberry, eri, muga and oak-tussar. The Manipur Sericulture Project was initiated by the Central government with the assistance of Japanese government, particularly, to provide employment to women.

For the Annual Plan 2013-14, a sum of $2.02 million is proposed for the implementation of the existing 13 sericulture development schemes.

The food processing sector plays a significant role in diversification and commercialisation of agriculture, horticulture, fisheries, poultry, animal husbandry and forest resources. Food processing training institute was set up at Porompat in Imphal East by upgrading the existing training centre and amalgamation with the existing regional extension service centre.

An integrated cold chain, value addition and preservation infrastructure would be set up for the development of food processing industries at Senapati district. A food park would be set up at Nilakuthi at a project cost of $5.3 million to provide common facilities like cold storage, warehouse, quality control labs, packaging, tool room, power, water supply and sewerage treatment.

Three common facility centres for bamboo processing have been established at Tamenglong, Churachandpur and Imphal. Manipur government is setting up a Bamboo Technology Park at Kadamtala, Jiribam at an estimated cost of $104.3 million.

The main objective of the park is to set up cluster-based bamboo processing units on a PPP basis under the special purpose vehicle (SPV) mode. The bamboo park is being set up in association with the National Mission on Bamboo Application (NMBA) of the central government. 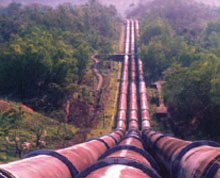 The government sees hydropower as a major industry and has given top-priority to developing the state's hydropower potential. In view of this goal, it has decided to invite private investors in the hydropower generation industry.

The main objectives of the 12th Five-Year Plan for the development of the hydro-electric sector are as under: 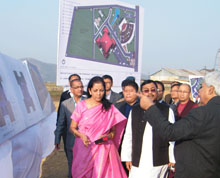 
Industrial Scenario of other states