Manipur is one of the seven states of Northeast India. The beautiful landlocked hill state is bound by Nagaland in the north, Mizoram in the south and Assam in the west.

Manipur shares a long border with Myanmar in the east as well as in the south. The state capital of Manipur is Imphal which has a wide range of ethnic and tribal mix. 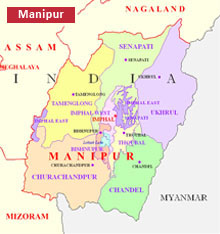 With a total area of 22,347 sq. km, Manipur has a population of 2.7 million people of ethnic mix originating from the Tibetan-Burman race. The capital Imphal lies in an oval-shaped valley of nearly 2,000 sq. km surrounded by blue mountains and is at an elevation of 790 metres above the sea level.

The slope of the valley is from north to south. The mountain ranges ensure a moderate and pleasant climate, preventing the cold winds from the north from reaching the valley and barring cyclonic storms originating from the Bay of Bengal.

The total water resources of Barak and Manipur river basins are about 1.8487 Mham(million hectare meters). The Barak River, the largest in the state, originates in the Manipur Hills and is joined by a number of tributaries such as the Irang, Maku, and Tuivai.

After its junction with the Tuivai, the Barak River turns north and forms the border with Assam state, and then enters the Cachar Assam just above Lakhipur. The Manipur river basin has eight major rivers: the Manipur, Imphal, Iril,Nambul, Sekmai, Chakpi, Thoubal and Khuga. All these rivers originate from the surrounding hills.

Almost all the rivers in the valley area are in the mature stage and therefore deposit their sediment load in the Loktak lake. The rivers draining the Manipur hills are comparatively young due to the hilly terrain through which they flow.

These rivers are corrosive in nature and assume turbulent form in the rainy season. Important rivers flowing in the western area of Manipur include the Maku, Barak, Jiri, Irang and Leimatak.

Rivers originating from the eastern part of the state (Yu river basin) include the Chamu, Khunou and other minor streams.

Manipur is generally characterised by two distinct physical regions -- an outlying area of rugged hills and narrow valleys; and the inner area of flat plains with all associated land forms.

These two areas are not only distinct in respect of physical features but are also conspicuous with regard to various flora and fauna.

The valley region would have been a monotonous, featureless plain but for a number of hills, ridges and mounds rising above the flat surface.

The Loktak lake is an important feature of the central plain. The total area occupied by all the lakes is about 600 sq. km. The altitude ranges from 40 metre at Jiribam to 2,994 metre at Mount Iso Peaknear Mao Songsong.

The soil cover can also be divided into two broad types -- the red ferruginous soil in the hills area and the alluvium in the valleys. The valley soil generally contains loam, small rock fragments, sand and sandy clay, and are quite varied.

On the plains, especially flood plains and deltas, the soil is quite thick. The top soil on the steep slopes is very thin. Soil on the steep hill slopes is subject to high erosion, resulting in gullies and barren rock slopes.

The climate of Manipur is largely influenced by the topography of this hilly region. Lying 790 meters above sea level, Manipur is wedged among hills on all sides. This north-eastern corner of India enjoys a generally amiable climate, though the winters can be a little chilly.

The maximum temperature in the summer months is 32 degrees C. In winter the temperature often falls below zero, bringing frost. Snow sometimes falls in some hilly regions due to the western disturbance.

The coldest month is January, and the warmest July. The ideal time for tourism in the state in terms of climate is from October to February, when the weather is bright and sunny without the sun being too hot. The state gets plenty of rain from May till mid-October. Manipur receives an average annual rainfall of 146.75 cm.

However, the rain distribution varies from 93.3 cm in Imphal to 259.3 cm in Tamenglong. The normal precipitation differs from light drizzle to heavy downpour across Manipur.

The normal rainfall of Manipur enriches the soil and helps in the agricultural processes and irrigation. The south-westerly monsoon picks up moisture from the Bay of Bengal and heads toward Manipur, hits the eastern Himalaya ranges and produces a massive amount of rain in the state.

The climate of the state is salubrious with average annual rainfall varying from 93.3 cm in Imphal to 259 cm in Tamenglong. The temperature ranges from sub-zero to 36°C. 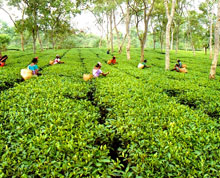 The natural vegetation is rich and diverse occupying a total area of about 14,365 sq. km which is nearly 64% of the total geographical area of Manipur.

The vegetation consists of a large variety of plants ranging from short and tall grasses, reeds and bamboos to trees of various species.

In addition, rubber, tea, coffee, orange and cardamom are grown in the hill areas. Rice is a staple food for Manipuris. Rice and cash crops make up the main vegetation cover in the valleys.