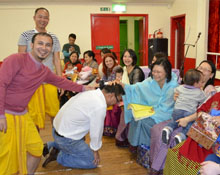 Encircled by lofty hills and dotted with scenic landscapes, Manipur is popular throughout India for its unique folk arts including dance drama and stage plays. Manipuris are simple people with agriculture being the main occupation.

While modern-day development is yet to touch Manipur, the people live in harmony in a pluralistic society consisting of 33 tribes with Meiteis in the majority. Food is very sacred to Manipuris as they take bath before entering the kitchen for cooking.

As the state is blessed with plenty of horticultural crops, the people relish buying a whole range of vegetables, rice and groceries for a sumptuous meal at home. 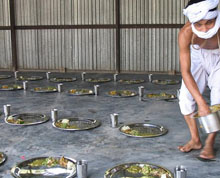 In the north-eastern region, Manipur is the only state that has professional cooks.

Bamons (Manipuri Brahmins) have inherited the sole rights to cook and they are hired by the people during festivals, religious events and family occasions for preparing a massive feast to a large number of invitees.

Preparing food is like a skilled art to Manipuris.

They take extra care on how to chop vegetables and the diligent process of traditional cooking is followed strictly in Manipur households.

Rice and fish curry are the staple diet of Manipuris.

A number of ethnic festivals are celebrated with folk dance, music and group singing that rent the air with enchanting sounds of ancient warrior tribes.

In the absence of major industries, Manipur thrives solely on handlooms, handicrafts, bamboo products, sericulture and forestry-based village enterprises. The people of Manipur are natural craftsmen and their skilled hands are the creators of some of the most exquisite handicrafts in the country.

The handicrafts of Manipur are also a major attraction for the tourists. 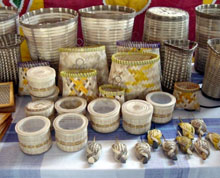 The most popular handicrafts of Manipur include:

The basic source of income for the local people is agriculture and handloom industry. Though the landmass of valley is much smaller as compared to the hilly region, land in the valley is more fertile and productive.

The valley people are better educated, more skilled, have better access to jobs and are contributing more and hence, have greater say in the running of the affairs of the State. The hilly tribes are less equipped to earn a comparatively better quality of lifestyle. Hence, they feel like a minority in their own state.

Besides, they have greater affinity with the Nagaland as the hills region has a sizable Naga population. Hence, the hill tribes are often in conflict with Meiteis and other tribes settled in the valley on a host of social issues including employment and territorial rights.

There are more than two dozen militant groups both in the hills and the valley with their own ideologies as they fight against the Army for secession from the Indian union. Apart from gun running, extortion, kidnapping and drug trafficking, the armed ultras disturb the delicate social fabric of Manipur by sowing the seeds of enmity and distrust among the various tribal groups.

Both the Central government and state are trying their best to wean away the youth from armed militias.

However, the lack of job opportunities and a reliable source of livelihood make the Manipuri youths to jump into the bandwagon of rebel groups with conflicting interests. Well educated and skilled youths migrate to other parts of the country for employment in top corporate houses, thus climbing up the ladder of success far away from their home state. 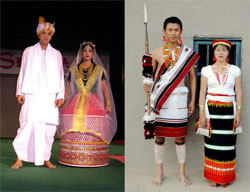 Rift between Nagas and Meiteis

The mutual suspicion and antagonism between the majority Meitei community and the hills tribes, primarily comprises the Nagas and the Zomi/Kuki tribes, has a long past.

A sort of siege mentality had gripped the Meitei people since about 15 years ago when the Naga integration movement became very strong, threatening to tear Manipur apart.

The Meitei people became acutely aware of the tenuousness of the hold they have on their state's territory.

The Manipur Land Revenue and Land Reforms Act, 1960 provided that non-tribalscannot buy and own land in the tribal "Hill Areas", unless the concerned deputy commissioner gave permission with the concurrence of the district councils.

The "Hill Areas" constitute almost 90% of the state's territory.

The Meiteis are non-tribals. As it is, their proprietorship of the hill areas is only notional. While the tribals have land, the Meitei people have political power – 40 seats in the 60-seat legislative assembly were Meitei seats.

The state government made repeated attempts to undo the limitation placed on the Meitei people regarding land ownership through legislation. The governor, who has a special responsibility regarding the administration of "Hill Areas" of Manipur under Article 371C of the constitution, can block legislations giving more rights to Meiteis by not giving assent to the bills.

The Manipur government has overtime taken out around 200 tribal villages from the cover of the “Hill Areas” and applied the MLR and LR Act on them through official notifications.

The hill tribals, on the other hand, are not blind to these machinations. They complained of neglect and discrimination in terms of developmental fund allocation, employment and in every area where state patronage extends.

Their longstanding demands for local autonomy, like under the 6th schedule of the Constitution, have not been granted. The Meitei people keep complaining about the paucity of space in the Manipur valley, yet all the crucial institutions and offices have been concentrated in the same crowded plains.

The cumulative impact is that the hills people have come to believe that they are given no stake in their own state. Further, the Nagas and other hill tribes believe the Meitei people and the government that they control have no interest in their welfare; it is only interested in their land. 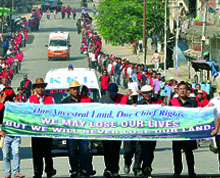 The spontaneous tribal upsurge since 31 August 2015 over the passage of three contentious bills in the Assembly, have brought Manipur to a virtual standstill.

While these bills were drafted to address the issue of insecurity felt by the majority Meiteis against the constant flow of migrants (outsiders) from rest of India to Manipur, Hills people feel aggrieving that they are being ignored.

In a tearing hurry to appease and cave in to pressure from Meiteis to implement the inner line permit system, the state government, according to Hills people, had violated the legal, constitutional and traditional rights of tribals on their land and identity.

But the state was quick to clarify that all the three bills won't affect the traditional rights of hill tribes who were 'misguided' and 'misinformed' over these new legislations.

The popular upsurge of Manipur hill tribes puts the spotlight on the ethnic cauldron of Manipur pillaged by conflicting interests, clans and social issues.

The mass agitations and protest rallies in the hills underscore the importance of winning over the tribals by safeguarding the interests without hurting the genuine fears of Meiteis.