Regular strikes, hartals and the threat of insurgent groups have gripped this beautiful hill state from 1980s creating a fear psychosis among Manipuris.

Manipur, like some of the other eight north-eastern states of India, has over a dozen militant groups that mount guerrilla attacks on the Indian Army demanding complete secession from the mainland. 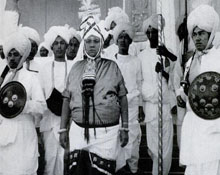 Manipuris feel that their last king (Maharaja Maharajah Bodhchandra Singh) was strong-armed into signing into the Indian Union in 1949. The separatists want to reclaim that sovereignty.

The eight states of the north-eastern India are together about the size of Spain. The region has a largely Tibeto-Burman population of about 40 million, more than half of which is in the valley state of Assam. The population is mostly tribal, and even in feudal Manipur there are about 30 tribes.

Manipuris have an innate sense of being an independent political entity for the last 2,000 years. But for the ruling political class in mainland, Manipur is another one of the 8 NE states bordering Myanmar and the secessionist terror must be put out with iron fist.

Manipur, on the other hand, has historically seen itself as its own centre, with its own worldview. In Manipur, India is called Pangaan, China is called Khaagi, Burma is Awa, and the Shan Kingdoms near the Golden Triangle are called Pong and so on. A number of ethnic groups have taken up arms to strive for an independent Manipur freed from a dictatorial India. Historically, Manipur is both self-referential and self-contained.

Its high culture and art forms are judged by its own cultural elites and have no reference to Indian cultural monikers. Manipur generates its own junk and pop culture.

The people of Manipur have a 'national microcosm' of their own culture and lifestyle as they go about with a grand vision of attaining self-determination in the near future. 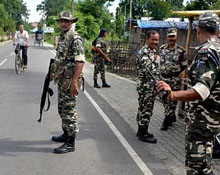 The presence of Indian soldiers is common on the streets of Manipur. Either in groups or cantonments, their regular patrols and armoured vehicles give a sense of reassurance to the locals who earn for sustained peace.

At the same time, militant groups thrive on hit-and-run tactics and behind the scene attacks on Indian Army without which Manipuris could not live in relative peace. Checkpoints are set up and civilians are subject to frisking by Indian Army to rule out terror attacks.

The combing operations of neighbourhoods and homes are common. Armed encounters take place between the Indian armed forces and rebels with regularity in the hills. Official figures record hundreds of insurgency-related deaths every year. There are cases of abductions, disappearances, torture and rape by rival militant groups as part of internecine revenge.

In some instances, the military had had to make reparations to individuals. The Governor of Manipur, a civilian appointed by New Delhi, is usually an Army or military intelligence officer.

The ratio of military and paramilitary personnel to civilians is 1:32 (as compared to 1:100 in Myanmar). Under the Armed Forces (Special Powers) Act of 1958, promulgated for Manipur and subsequently extended to Kashmir, Indian Army can arrest or shoot civilians on suspicion.

Under the National Security Act, civilians may be detained without trial for up to one year.

With her pluralistic social fabric consisting of the main groups namely, the Meiteis, the Nagas, the Kuki/Zomi and other small communities, Manipur is a heterogeneous society with diverse mix of cultures and lifestyles.

Manipur is a cauldron of revolutions, insurgencies and ethnic violence as ethnic groups fight it out to assert their authority. The Naga movement, Meitei rebellion and Kuki/Zomi revolution are some of the major social upheavalsgoing on for decades challenging the political authority of Manipur.

While Manipuris suffer the most from sectarian strife and civil unrest staged by armed insurgents, the state terrorism in the form of Army excesses have weakened the political authority.

Social tension coupled with economic depravity is ripe in Manipur as no economic growth is possible in a volatile situation. According to observers, the law enforcing machinery, namely military, para-military and police forces are chocking the state and they have made Manipur a police state. The ruling clique is termed as a 'motley group' of opportunist politicians and selfish bureaucrats who have totally failed.

The ethnic clashes, kidnappings for ransom, free trespasses of the militants or thugs under the very nose of the security forces have deteriorated the situation. In order to pull out Manipur from the political and social quagmire created by insurgency and ethnic clashes, it is felt that Central government in Delhi must engage the revolutionary groups in talks.

Well-meaning peacemakers can be roped in as mediators between the Centre and the Manipur insurgents to sustain the dialogue process and take it to its logical conclusion, say political analysts. 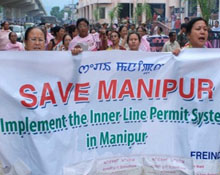 Joint Committee on Inner Line Permit System (JCILP) has appealed to the Manipuris to extend solidarity with the movement to implement a system that will protect the indigenous communities from being swamped by migrants.

The three Bills had been introduced after the state government has signed an agreement with the JCILPS on August 25, 2015. Following mass protests, rallies and sit-in dharnas calling for the introduction of ILPS (inner line permit system) in Manipur, the high-level panel has come out with its report on protecting the indigenous people of Manipur.

After the Bills are passed into Acts, the state machinery will be empowered to control the unabated flow of migrants into Manipur.

These new set of laws are designed to protect the local tribes and ethnic groups from thousands of migrants who come and settle in large numbers displacing locals from their long-held vocations.


Current Scenario of other states