A dangerous mix of divisive politics and a society polarised by caste and communal factors make Uttar Pradesh a state held captive to the inimical forces from within. But nothing can take away the pride of UP people who have an enriching history of the state right from the mythological era of Lord Ram and Lord Krishna to the Independence movement. 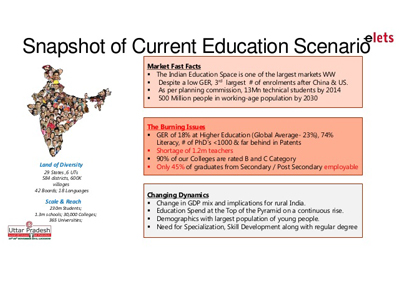 In fact, history significantly defines the lifestyle of the present day Uttar Pradesh. The vast land of northern plains abutting the Gangetic delta and sharing border with Nepal has been ruled by many kings, invaders and emperors who had contributed much to the Indian civilisation.

The culture of UP has its roots in the Hindi and Urdu literature, music, fine arts, drama and cinema. Lucknow, the UP capital, has several beautiful historical monuments such as Bada Imambara and Chhota Imambara.

It has preserved the damaged complex of the Oudh-period British resident's quarters, which are being restored. UP attracts a large number of tourists, both domestic and foreign visitors, each year.

The most favoured spot for foreign tourists in UP is the Taj Mahal in Agra which attracted the biggest chunk of foreign visitors (over 14.78 lakh in 2014). UP has the potential to attract over 2.8 million foreign tourists by 2017 compared to over 2 million overseas visitors in 2013. 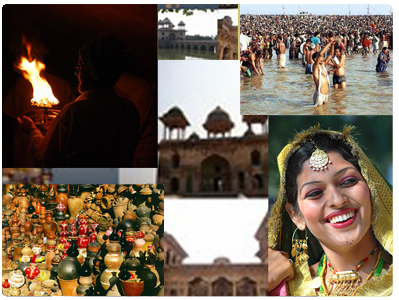 UP along with Tamil Nadu, Maharashtra and Delhi has been ranked among the most sought-after tourist destination for both domestic and foreign travellers. Total tourist arrivals in UP had increased by 34% year-on-year (y-o-y) from about 170 million in 2012 to 230 million in 2013, a trade study revealed.

UP has ranked second most-visited place for domestic travellers with over 220 million Indian tourists visiting the state in 2013. Thus, the state accounted for almost 20% share in total number of over 1.14 billion domestic tourist visits made throughout India.

UP politics and backwardness

Vote-bank politics and manipulating the people's sentiments by taking up religious and emotive issues have created havoc among the UP people. The social backwardness of the people divided on caste lines and sectarian loyalties is one of the key issues that are yet to be addressed by the major parties in UP -- the ruling Samajwadi Party, opposition Bahujan Samaj Party, BJP and Congress. 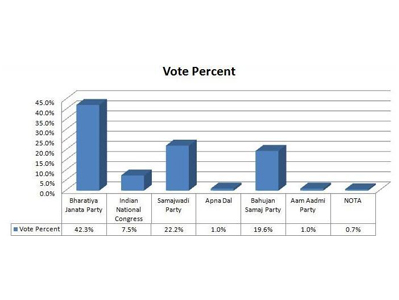 Poverty and under-development in the Hindi belt have been worrisome features in India's growth story. Since Independence, UP has sent most of the Prime Ministers to rule the country right from Jawaharlal Nehru and Lal Bahadur Shastri till Rajiv Gandhi.

A huge state that decides the political discourse of India is being neglected and deliberately allowed to wallow in social backwardness, illiteracy and communal polarisation. Poor governance, lack of accountability from politicians, huge population and divided people owing multiple allegiances have been some of the negative factors that pull down the image of UP among rest of India. 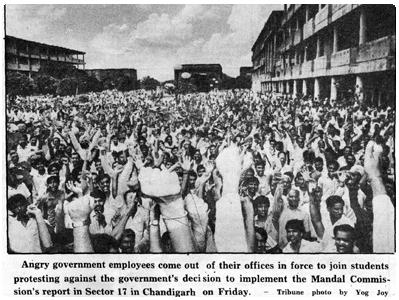 The Mandal Commission was a political move by the Prime Minister Morarji Desai during the Janata government (1977-79). The commission headed by B.P. Mandal was set up to identify 'Other Backward Classes' as we know them today and provide them reservations in education and government jobs.

Although the report was published in 1980, it was sought to be implemented in 1989 by the then Prime Minister V.P. Singh who led a rainbow coalition of National Front.This led to widespread protests by the youth and several cases of self-immolation occurred in UP.

Singh implemented the report not because he was committed to any social justice, but because he was hard pressed to save his government from the trouble being caused by Devi Lal and other rebels within his coalition. 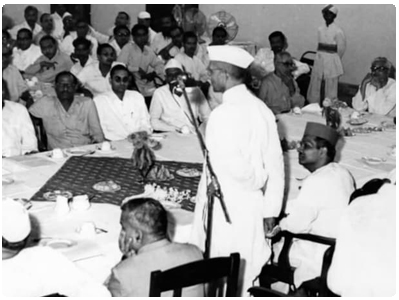 The impact of the Mandal Commission on UP politics was far-reaching and permanent. The politics crystallised heavily around caste lines and the traditional dominance of the upper castes was challenged. Leaders like Mulayam Singh Yadav (in UP) and Lalu Prasad Yadav (in Bihar) benefited massively from this emergence of vote-bank politics.

Uttar Pradesh in a way became the first state to have developed a committed vote bank comprising the OBCs which are being wooed by parties with sops and freebies during election. The Mandal Commission allowed Mulayam Singh Yadav to claim the rightful benefactor of the OBCs and as a guardian of their interests.

'Kamandal' is a Hindi word referring to aa pot traditionally carried by Hindu ascetics. It was an iconography that was invoked by the BJP and its leader Lal Krishna Advani to unite the Hindus, warning them to not fall prey to the divisive caste politics of the Mandal.

Mandal and Kamandal have become anti-thesis of each other in political ideology. To consolidate the people under Kamandal, BJP patriarch Advani took out the Rath Yatra and invoked the Ram Janmabhoomi issue, an issue that had been simmering for quite some time.

But for the first time, BJP took a bold move and put the issue of Ram Janmabhoomi straight into the main poll plank of Indian politics in 1990s. After invoking the religious sentiments of Hindus, BJP reaped political dividends as it formed governments both in the Centre and Lucknow, the capital of Uttar Pradesh. 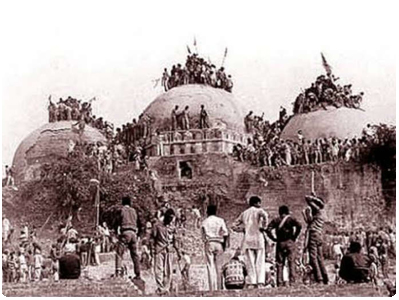 The Kamandal politics led to a temporary unison of the Hindus as one significant voter group rejecting exploitation on caste lines and minority appeasement. But soon it went out of control following the demolition of the Babri Masjid by the BJP-led Kar Sevaks in December 1992.

Soon Kalyan Singh of BJP was defeated at the polls with a combination of OBCs and Dalits votes gaining prominence at UP political stage. Ruling BJP was prevented from returning to power by an alliance of Mulayam Singh Yadav and Bahujan Samaj Party.

It was during this time that SP perfected the MY (Muslim-Yadav) formula. One part of the BJP's claims to the OBC votes lies on the Kamandal politics. The contemporary analysts, politicians and journalists have repeatedly sought to downplay or vilify the sentiment behind the Babri Masjid demolition.

However, the truth is that Hindu sentiment is still both real and genuine.

The task of giving a political identity, and thereby empowerment, to the Dalits was taken up by Bahujan Samaj Party founder Kanshi Ram and his protege Mayawati. Initially the movement took a vitriolic stand against upper castes particularly the Brahmins.

In its earlier days it employed hate-mongering and demeaning slogans targeting the Brahmins of the state. The BSP had hijacked the entire Dalit vote from the monopoly of the Congress Party and this has led to a decline of the Congress in UP. Over the years the anti-Brahmin tirade of the BSP has undergone one of the most unexpected transformations in the sense that the BSP now aims to unite the scheduled castes and the upper castes (especially the Brahmins) into is vote banks.

The BSP claims the bulk of the SC vote bank because of this Dalit mobilisation and self-respect movement.

BJP rejigs itself as OBC party

The BJP had started, during the tenure of Rajnath Singh, a new social engineering that aimed to limit the outreach of heavily casteist leaders like Mulayam and Mayawati. Their aim was to identify the 'Most Backward' of the OBCs. 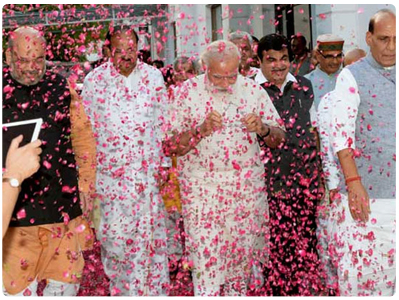 It is worthwhile to note that both these castes, the Yadavs and the Jatavs are perceived as supremacists and oppressors within their own groups, i.e., the OBCs and the SC/ST respectively.

While the efforts to identify the MBCs were initiated by the BJP, they never reached fruition as the Mayawati government after Rajnath Singh put a stop to all such study and data collection.

However, this 'MBC' factor gave the BJP the necessary sway in voters in the 2014 elections. The second part of BJP's claim to the backward caste votes comes from this factor. The BJP will seek to unite and strengthen its appeal in the OBC vote bank by playing the caste of Modi who has risen to be the PM.

Future of UP politics, society

The battle in UP is shifting towards a triangular contest in a gradual manner. The Congress Party appears to have lost all sense of direction and will be a non-factor for the foreseeable future, unless of course something drastic happens.

It has lost both its traditional vote banks, the Dalits and the Muslims, to regional players and is unlikely to regain them. It is, thus, the party that needs to be removed from the previous quadrangular UP battle-ground. The ruling SP is in disarray. Its poor governance and growing crime rate in UP will work against Mulayam Singh party despite his strong faith in vote-bank politics.

In any case, the SP's traditional MY (Muslims-Yadavs) formula will be under stress too. The Muslims are disenchanted with the SP and the Yadavs are also slowly being inclined towards the BJP idea of consolidated Hindu vote bank. Only time will tell as to how much of these social and political undercurrents will erode the support base of Samajwadi Party.

If things go as is being predicted, then it is possible that SP may too become redundant in UP just like the Congress but that will require spirited campaign by the BJP (for the Yadavs) and BSP (for the Muslims).

Also, BJP having a tacit understanding with Mayawati's BSP at the time of polls could not be ruled out. According to seasoned analysts, BSP in spite of its shock defeat in the Lok Sabha polls seems to be the party with the most stable vote bank. The Dalits are not going to desert the party in favour of either a decaying Congress or a perceived upper caste party like the BJP.

Of course the BJP's anti-Dalit card may well be a threat but there really is no Dalit icon equal to Mayawati to precipitate a mass-desertion of this vote bank.

BJP riding on UP wave

The BJP riding on its fine show in 2014 Lok Sabha polls aim to secure its resurgence in the Hindi heartland and secure the strategic advantage that it had lost long ago. Many factors seem to be working in its favour. 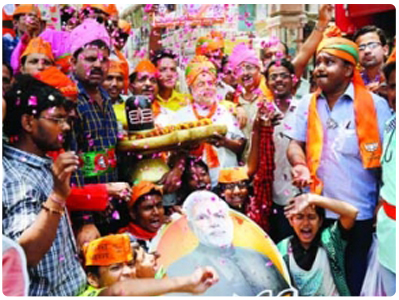 The blatant appeasement of the minorities by the ruling SP government in the face of shocking human rights violations gives strength to Hindutva and the Kamandal sentiments. The MBC and the anti-Dalit cards seem to be the BJP's share in the 'Social Justice via Reservations' pie.

Above all the charismatic leadership at the Centre and brilliant strategists and orators at the state level may well ensure that the BJP is able to turn around the fortunes of UP.The battle will be more or less between two confident parties BJP and BSP, each having nurtured their vote banks with painstaking efforts.