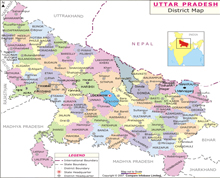 The northern state of Uttar Pradesh literally means "northern province" and has been the focal point of many political, social and economic changes taking place in India since the Mughal era of the subcontinent.

UP is the fourth largest state with a total land area of 2.43 lakh sq. km which is equal to 6.88% of the aggregate land mass of India. On 9 November 2000, a new state, Uttarakhand, was carved out from the Himalayan hill region of Uttar Pradesh.

During the colonial times, UP was created on 1 April 1937 as the United Provinces, and was renamed Uttar Pradesh in 1950. Lucknow, the capital city of Uttar Pradesh, is known for its heritage value and houses the administrative structures and apparatus of the present government.

Ghaziabad, Kanpur, Allahabad Moradabad, Bareilly, Aligarh, and Varanasi are known for their industrial clusters offering huge employment as well as powering the economic growth of UP. The state is bordered by Rajasthan to the west, Haryana and Delhi to the northwest, Uttarakhand and the country of Nepal to the north, Bihar to the east and Madhya Pradesh to the south.

Besides, UP touches small areas of Jharkhand and Chhattisgarh to the south-eastern corner. With over 200 million inhabitants in 2011, it is the most populous state in the country as well as the most populous country subdivision in the world.

Hindi is the official and most widely spoken language in its 75 districts. Uttar Pradesh is the third largest Indian state by economy with a GDP of Rs 9,763 billion ($150 billion). Agriculture and service industries are the largest parts of the state's economy.

The service sector comprises travel and tourism, hotel industry, real estate, insurance and financial consultancies. Uttar Pradesh was home to powerful empires of ancient and medieval India. The two major rivers of the state, the Ganges and Yamuna, join in Allahabad and then flow as the Ganges further east.

Ground perspective on UP

Uttar Pradesh is the rainbow land where the multi-hued Indian culture has blossomed from times immemorial. Blessed with a variety of geographical and cultural diversities, UP has been the area of activity of historical, mythological heroes like Rama, Krishna, Buddha, Mahavira, Ashoka, Harsha, Akbar and Mahatma Gandhi.

Rich and tranquil expanses of meadows, perennial rivers, dense forests and fertile soil of UP have contributed the golden chapters to the annals of Indian history. Dotted with various holy shrines and pilgrim places, full of joyous festivals, it plays an important role in the politics, education, culture, industry, agriculture and tourism of India.

UP is garlanded by the holy rivers Ganga and Yamuna which have defined the cultural lineage of the subcontinent. This is fourth largest state in India (2.43 lakh sq. km), but when it comes to sheer diversity of its landscape, people and culture, UP stand tallest in India.

To understand the vastness of UP's land, the state equals half the area of France, three times of Portugal, four times of Ireland, seven times of Switzerland, ten times of Belgium and a little bigger than England.

The British East India Company came into contact with the Awadh rulers during the reign of 3rd Nawab of Awadh. There is no doubt that the history of UP has run concurrently with the history of the country during and after the British rule.

It is also well-known that the contribution of the people of UP in freedom movement had been significant.

This huge state is divided into 18 divisions and they are further segmented into 75 districts. The 18 divisions which have its own administrative units are: Saharanpur, Moradabad, Bareilly, Lucknow, Devipatan, Basti, Gorakhpur, Meerut, Aligarh, Agra, Kanpur, Faizabad, Azamgarh, Jhansi, Chitrakoot, Allahabad, Varanasi and Mirzapur.

Blocks consist of panchayats (village councils) and town municipalities. These blocks consist of urban centres including census towns and rural units called gram panchayats. UP has more metropolitan cities than any other state in India. The urban population of the state is 44.4 million, which constitutes 11.8% of the total urban population of India, the second highest of any state.

According to the 2011 census, there are 15 urban clusters with a population greater than 5 lakh. There are 14 municipal corporations, while Noida is specially administered by a statuary authority.

In 2011, state cabinet headed by the then CM Mayawati announced the separation of UP into four different states of Purvanchal, Bundelkhand, Avadh Pradesh and Paschim Pradesh with 28, 7, 23 and 17 districts respectively.

However, the proposal was turned down when Mulayam Singh Yadav led Samajwadi Party came to power in the 2012 election.