A breath-taking tourist paradise Manipur is surrounded by blue hills and dottedwith lush green landscapes as this 'jewelled land' is richly endowed with nature's beauty.

Located in a corner of northeast India, Manipur is hailed as the 'Switzerland of India' for its pristine scenery and a laidback lifestyle that pulls visitors from the Indian mainland. 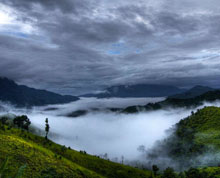 Combined with the Manipuri dance and art forms, the state is also popular for its attachment to divinity and adherence to centuries-old traditions which make the people so unique in the Indian subcontinent.

Manipur is nestled among smoky blue hills and is famous for its legendary tales, myths and mysteries. Tourist attractions in Manipur lie mostly in its splendid landscape, bounteous nature and its cultural wealth.

The mysterious hills and the verdant forests offer a stunning mix of attractions for visitors who feel captivated by the remote richness of Manipur. Nature is intoxicatingly beautiful and the serenity is overwhelming.

Here are some of the enchanting places in Manipur:

The capital city of the state lies in a heart shaped valley 790 metres above sealevel. This is a melting pot of various tribes that constitute the population of Manipur.

Imphal is located at the centre of the beautiful Manipur valley and is surrounded by plains and hills. Dense forests and sprawling grasslands make the place a heaven on earth. The place also reflects the rich tradition of the state.

Tourist attractions in Manipur are mostly located in around the city.

Some of the tourist attractions in Imphal are: 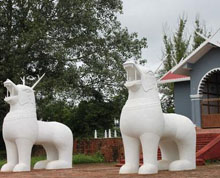 This is a Vaishnavite temple built by the former Kings of Manipur. The simple but beautiful structure consists of 2 domes and a large congregation hall. The shrines of Lord Krishna and his cousin Balaram on one side and Lord Jagannath flank the presiding deity.

The sprawling land of 200 acres boasts of over 110 rare varieties of orchids including a dozen endemic species.

The biggest natural freshwater lake of the North Eastern region of India is the Loktak Lake that is situated at a distance of 48 km from Imphal. The lake is dotted with the vegetative growth of the Phoomdis that grow on the lake.

The Sendra Island is situated on the lake itself and has a tourist bungalow that provides a captivating view of the lake waters. 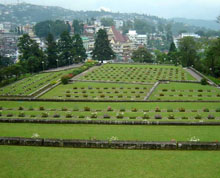 It houses Sangai (the graceful brow antlered deer) at the base of pine-clad hillocks.

This is a small hill featuring relics of a historic palace and architecturally beautiful temples.

This is a picturesque city and a visual delight.

Blessed with scenic valleys, streams, waterfalls and blue hills, Ukhrul is the right destination for avid nature lovers. The weather is pleasant and the topography is resplendent with Mother Nature at its best.

Here as some of the choice destinations in Ukhrul:

Considered a holy land thanks to the many temples located here, Bishnupur is one of the most frequented cities in Manipur for both its natural beauty and places of worship. This holy place is known for Vishnu temples with a peculiar Chinese influence.

The ancient temples reflect the rich culture of the land and its architectural excellence. The Loktak Lake, the largest fresh water lake of the north-eastern India, and Red hill where a fierce battle between the British and the Japanese took place during the World War II are major attractions.

It is yet another picturesque town in Manipur. Situated amidst hills, the place is perfect for trekking and hiking. Lush greenery, beautiful rivers and lakes make the place a perfect destination for outdoor activities.

The local people enhance the greenery here by planting banyan trees along roadsides and fruit bearing trees in the grounds of their homes. 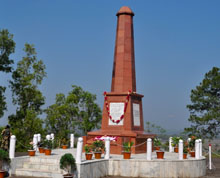 Here are some top destinations in Thoubal:

The town is the gateway to Myanmar. The geographical importance, however, does not end there. The land is rich in flora and fauna being home to a wide range of species. Rare species of animals and plants are found here that attract tourists in great numbers.

Here are some of the tourist destinations in Chandel.

A remote place in Manipur with large parts yet to be explored. This beautiful land is filled with hills, steams, gorges and rivers. With 80% of the land covered by dense forests, Senapati accommodates a wide range of rare plants and near extinct animals.

Some of the top destinations are:

Known as the 'Land of Hornbill', Tamenglong is rich in flora and fauna. The place has a number of unexplored forests, rare species of plants, animals and birds which will captivate nature lovers.

With lakes, rivers and waterfalls, the town offers a dream site for tourists.

Some of the scenic locations are:

The town fits the bill perfectly as a district in Manipur. Like other parts of this hill state, Churachandpur abounds in natural beauty. Located amidst hillocks and valleys, the place is a scenic delight.

It is also the second largest town in the state. The land boasts of unity in rich cultural diversity. Boat riding facilities are available at Tipaimukh. 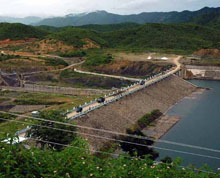 Here are the important tourist spots in Churachandpur:

The ideal time to visit Manipur is during the months of October to May when the weather is pleasant and sunny. A number of tourist lodges and guest houses are there for the comfortable stay of visitors in Manipur.

How to reach Manipur

By air: Imphal, the capital of Manipur has an airport which is served various domestic airlines. Indian Airlines, Jetlite and Kingfisher Airlines operate regular flights to and from Imphal.

By rail: Manipur has no railway network. The nearest railway stations to Manipur are in Guwahati, Silchar and Dimapur that are serviced by important trains to and from the rest of the country.

By road: Manipur is well connected with all-important cities of the country by an extensive network of national and state highways.

Manipur State Transport Corporation operates regular scheduled buses from Imphal to the other cities in the region.

The best way to travel within the state is by local buses, unmetered taxi and private vehicles. Autorickshaws and cycle rickshaws are also available in Imphal. 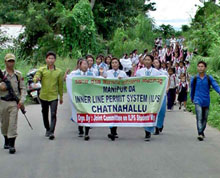 Behind Manipur's demand for the Inner Line Permit (ILP) is the deep-seated fear of indigenous populations coming under stress because of the influx of 'outsiders' or 'Mayangs' referring to both Indians and foreigners.

ILP is a document a visitor (both Indian and foreigner) must obtain for entering the state mentioning the period of their stay among other things to the authorities. At present, ILP is prevalent in Mizoram, Nagaland and Arunachal Pradesh called jointly as "MiNA" states.

The state's population is around 2.7 million, of which 7 lakhs are those who do not belong to Manipur. The demand is stronger in the valley districts of the state, as the hill districts, where the tribal populations live are already protected against influx of non-tribals.

The fear is on many levels including the increased competition in jobs, businesses, education, demographic change, political overpowering and cultural erosion. The Manipuris backed by political parties are now demanding ILP for Manipur so that they can safeguard their culture, heritage and land from the steady flow of migrants.

If Centre gives in to the demand of ILP in Manipur, then tourist and migrant flow to this remote state will be streamlined under the watchful eyes of state machinery.

The Joint Committee on Inner Line Permit System (JCILPS) is spearheading a protest against a controversial Bill aimed to protect the rights of indigenous people.

The state government has decided to withdraw the Manipur Regulation of Visitors and Migrant Workers Bill, 2015 following a series of protests and agitations.

The Bill had come under attack from those demanding implementation of ILP in the state who claimed that it did little to protect the interests of indigenous people of the state.