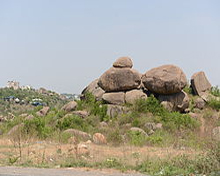 Situated on the Deccan plateau, Telangana state occupies 1.14 lakh sq km on the central stretch of the eastern seaboard of the Indian peninsula.

Despite the region drained by two major rivers - 69% of Krishna's catchment areas and 79% of Godavari - most of the land is dry and arid. There are also minor rivers like Bhima, Manjira and Musi that crisscross the state comprising 10 districts in all.

The annual rainfall ranges from 900 to 1,500 mm in northern Telangana and 700 to 900 mm in southern Telangana, mostly getting the precipitation from the southwest monsoon.

It is noteworthy that 45% of forest cover of undivided Andhra is now located in the five districts of Telangana.

The plateau's average elevation is about 1,600 feet with its peaks in the west and southwest and gradually sloping down towards the east and northeast, where it meets the disjointed ridges of the Eastern Ghats ranges. 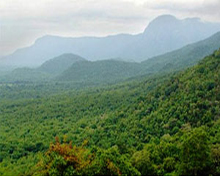 The summer begins from March to end in June, followed by a period of tropical rains from July to September; and finally, winter occurs from October to February.

The annual precipitation mostly from the rainy southwest monsoon winds varies across the state. It averages about 35 inches (900 mm) per year, although the annual total often varies considerably from the average and can be as little as 20 inches (500 mm) in drier areas. 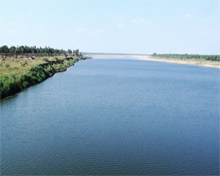 While thorny vegetation is spread across the hills of the plateau region, thick jungles are common in the northeast along and near the Godavari river.

Comprising one-fourth of land area, the forests are both moist deciduous and dry savannah in nature with teak, rosewood, wild fruit trees and bamboos found in plenty.

Generally, neem, banyan, mango and papal trees are quite common across Telangana districts.

Some of the wildlife spotted in the reserve forests are tigers, blackbucks, hyenas, sloth bears, gaurs and chital which thrive in a symbiotic ecology prevalent in the Telangana forests.