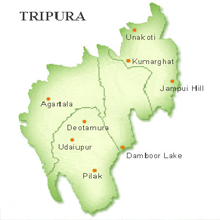 Tropical climate prevails in the state generally and the state saws heavy rainfall during the monsoon. Average rainfall of the state is about 2100 mm. Hilly region occupies most part of the state.

Tripura has three physiographic zones namely hill range, undulating plateau and low lying alluvial land. On its north, it has four valleys that have been separated by hills with heights of about 1,000 meters. On its south.

It has open forested land spread over a wide range of area.

The soil in the valley is fertile with rich alluvial deposits and therefore suitable for the cultivation of paddy, jute, oilseeds, pulses, fruits and vegetables. About 54.5% of the land is under forest. Only about 24.3% area is available for agricultural use.