Himalayan state Uttarakhand has a total area of 53,483 sq. km,of which 86% is mountainous and 65% is covered by forest. Most of the northern parts of the state are covered by the Himalayan peaks and glaciers.

In the first half of the 19th century, the expansion of Indian roads, railways and other infrastructure was giving rise to concerns over the indiscriminate logging, particularly in the Himalayas. 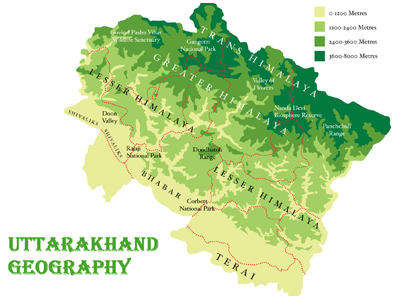 Two of the most important rivers in Hinduism originate in the region, the Ganges at Gangotri and the Yamuna at Yamunotri. These two along with Badrinath and Kedarnath form the ‘Chota Char Dham’, a holy pilgrimage for the Hindus.

The state hosts the Bengal tiger in Jim Corbett National Park, the oldest national park of the Indian subcontinent.

The Valley of Flowers, a UNESCO World Heritage Site located in the upper expanses of Bhyundar Ganga near Joshimath in Gharwal region, is known for the variety and rarity of its flowers and plants. 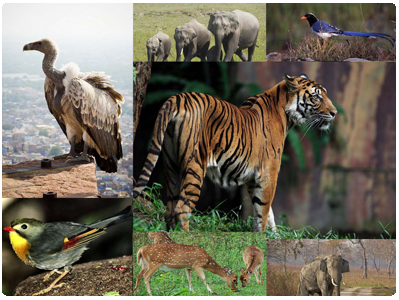 Following the charter, the Indian Forest Act of 1878 put the Indian forestry on a scientific basis. In 1878, Dietrich Brandis set up the Imperial Forest School in Dehradun which was renamed Imperial Forest Research Institute in 1906.

After Independence, the pioneering institute is being called as the Forest Research Institute.The model “forest circles” around Dehradun, used for training, demonstration and scientific measurements, had a lasting positive influence on the forests and ecology of the region.

The Himalayan ecosystem provides habitat for many animals (including bharal, snow leopards, leopards and tigers), plants and rare herbs.

Two of India's largest rivers, the Ganges and the Yamuna, originate in the glaciers of Uttarakhand, where they are fed by myriad lakes, glacial melts and streams. Uttarakhand lies on the southern slope of the Himalayan range, and the climate and topography vary greatly with elevation, from glaciers at the highest elevations to subtropical forests at the lower elevations.

The highest elevations are covered by ice and bare rock. Below them, between 3,000 and 5,000 metres are the western Himalayan alpine shrub and meadows. The temperate western Himalayan sub-alpine conifer forests grow just below the tree line. 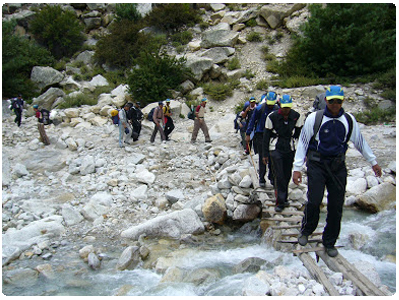 The upper Gangetic plains have moist deciduous forests. The drier Terai-Duar savanna and grasslands cover the lowlands along the Uttar Pradesh border in a belt locally known as Bhabhar.

These lowland forests have mostly been cleared for agriculture, but a few pockets remain. In June 2013 several days of extremely heavy rain caused devastating floods in the region, resulting in more than 5000 people missing and presumed dead.

The flooding was referred to in the Indian media as a "Himalayan tsunami".

The climate of Uttarakhand is temperate, marked by seasonal variations in temperature but also affected by tropical monsoons. January is the coldest month, with daily high temperatures averaging below freezing in the north and near 21 °C in the southeast.

In the north, July is the hottest month, with temperatures typically rising from the about 7 °C to about 21 °C daily. 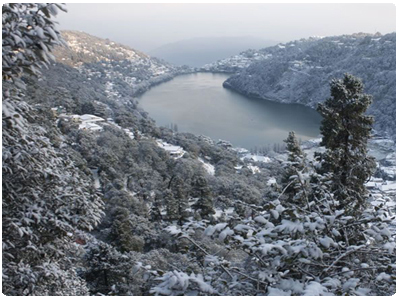 In the southeast, May is the warmest month, with daily temperatures normally reaching about 38 °C from a low of around 27 °C.

Most of the state’s roughly 150 cm of annual precipitation is brought by the southwest monsoon, which blows from July through September. Floods and landslides are problems during the rainy season in the lower stretches of the valleys.

In the northern parts of the state, 10-15 feet (3 to 5 metres) of snowfall is common between December and March.

Four major forest types are found in the Uttarakhand including alpine meadows in the extreme north, temperate forests in the Great Himalayas, tropical deciduous forests in the lesser Himalayas and thorn forests in the Siwalik Range and in parts of the Tarai.

According to official statistics, more than 60% of Uttarakhand is under forest cover; in actuality, however, the coverage is much less. The forests provide not only timber and fuel wood but also extensive grazing land for livestock. 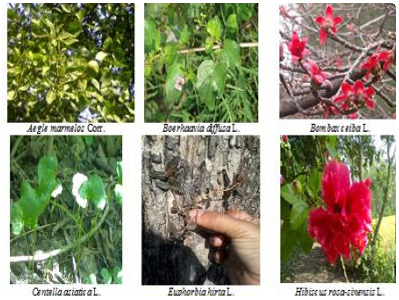 Crocodiles are found in some areas. Lions and rhinoceroses have become extinct in the region. A number of national parks and sanctuaries have been established to preserve Uttarakhand’s wildlife.