For Hindus all over the world, Uttarakhand is the most revered state as it is the abode ofa number of pilgrim sites, hoary temples and religious spots known for spirituality. 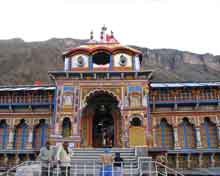 Apart from pilgrim sites, the hill state attracts lakhs of visitors for mountain and adventure tourism.

The temples of Lord Shiva and Goddess Durga are found in abundance in the hill regions. The presence of the 'Chardham' makes Uttarakhand a religious place of significance for devout Hindus.

The term 'Chardham' refers to the four pilgrimage centres of Hinduism: Badrinath,Kedarnath, Yamunotri and Gangotri. According to Hindu belief, a visit to all these four places at least once in a lifetime leads one to salvation after death. 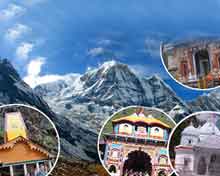 The Chardham temples in Uttarakhand were established centuries ago by Adi Shankaracharya, who pioneered the Advaitic school of thought in Vedic philosophy. Other than Chardham, there are numerous sacred towns like Haridwar and Rishikesh which are also frequented by pilgrims throughout the year.

Popular deities like the Neel Kanth Mahadev (Rishikesh) and the hill top temples of Mansa Devi and Chandi Devi (Haridwar) are patronised by millions of Hindus from India and abroad. Famous temples like that of Vishwanath (Almora) and Binsar Mahadev (Ranikhet) follow age-old rituals with devotees offering poojas on festive occasions.

Every pilgrim cherishes the visit to Uttarakhand temples which offer a profound insight to many interesting aspects of Hinduism. Those who are not deeply inclined to religious experience get captivated by a sense of spirituality that pervades the air in and around pilgrim sites. The religious trait of Uttarakhand is well understood by people in rest of the country and hence, the state is rightly called 'Dev Bhoomi' (Land of Gods).

Most of the shrines and temples are mentioned in epics and Puranas and hence they have a Vedic ancestry. Uttarakhand temples and pilgrim spots are located in the backdrop of Himalayan foothills, thus giving a lush visual treat to devotees.

The temple is located at Badrinath, one of the sacred towns for Hindus. It was constructed by the Garhwal kings nearly two centuries ago. The temple has three sections: garbhagriha (sanctum), darshan mandap and sabha mandap. 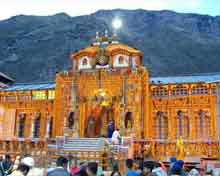 The garbhagriha enshrines Lord Badri Narayan (Vishnu), Kuber (deity of wealth), Narad Rishi, Uthavar, Nar and Narayan. Lord Badri Narayan (or Badri Vishal) is armed with 'shankh' (conch) and 'chakra' in two arms in a raised posture and two arms supported on the lap in Yogamudra. The primary image is sculpted from black stone and embodies Vishnu in a contemplative pose.

Kedarnath is one of the holiest pilgrimage sites for pious Hindus. The temple here is probably the most sacred Hindu shrine in the Himalayas and is one of the major Shiva temples in the country. Kedarnath temple contains one of the 12 Jyothirlingas of Lord Shiva and one of the 'Panch Kedars'.

Kedar is a name for Lord Shiva who embodies myriad passions of love, hatred, fear, death and mysticism by his various forms. Mythology identifies the Kedarnath idol with the rump of a bull, a disguise adopted by Lord Shiva to escape recognition by the Pandavas who sought repentance for killing relatives in the battle of Kurukshetra. When the Pandavas insisted on pursuing him, he dived into the ground leaving behind a hump on the surface. This conical projection is worshipped at the shrine.

The Gangotri temple is one of the famous 'Chardham' or the four most revered pilgrimages. The other three temples are Yamunotri, Kedarnath and Badrinath. This temple lies at an altitude of 3,200 metres and is nestled amid the beautiful surroundings of deodars and pines. 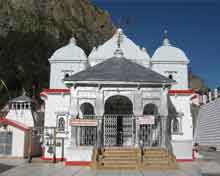 The temple was built in the 18th century. It lies close to the holy rock or the ‘Bhagirath Shilas’ where King Bhagirath had worshiped Lord Shiva. The penance was to please the God so that he forgives his son's sins. Moreover, this was the place where Ganga descended to the earth.

The Gangotri temple is dedicated to Goddess Ganga. It lies on the banks of River Bhagirathi. Gangotri temple was constructed by the Gorkha General Amar Singh Thapa. A number of ashrams and dharamshalas are found around Gangotri.

One of the most important centres for the Hindu pilgrimage is the Sangura temple. The temple lies on the banks of Nyaar River and houses a Siddh Peeth of Maa Bhuvneshwari. The region is nearly 15 km away from Satpuli in Pauri district of Uttarakhand. It is believed that whoever goes to the Sangura temple and takes 11 turns or Ekadash parikrama around the Goddess gets his or her wishes fulfilled.

It is also said that this place was selected by the Goddess Maa Bhuvneshwari herself as her abode. There is an interesting legendary story behind the establishment of this holy shrine. It is said that once upon a time the Indraprastha region was repeatedly attacked by the invaders. They often destroyed the holy places of the Hindus.

So five goddesses made up their minds to leave this place and go to the Himalayas. Maa Bhuvneshwari of Sangura temple was one of them. 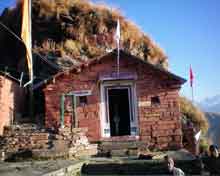 Located in the dense forest, Rudranath temple in Gaurikund is a well-known place for the Hindu pilgrimage. The natural curvature of the mountain resembles the face of Lord Shiva. This is why it is called the 'Rudramukh' or the face of the Lord Shiva. Located at an altitude of 2,286 meters, the temple has scenic nature all around with lush flora covering the mountains.

Here Lord Shiva has been depicted as the 'Neelkantha'. Rudranath temple is included amongst the sacred places in Uttarakhand which are nested in the lap of the virgin nature.

The shrine is located in a popular hill resort Nainital. The hill station houses a vast lake surrounded by mountains on the three sides. In the past there were so many lakes in and around Nainital that this place was often referred to as 'the city of 60 lakes' or 'Chakta'.

But many of these lakes are no more in the present times. The lake associated with the Naina Devi temple is however still alive.The very life of the town of Nainital is going around it. 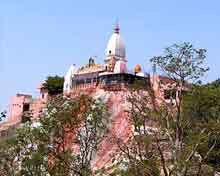 This is age-old temple that is located on the top of a hill called the Bilwa hill situated near the principal city of Haridwar. The temple enshrines a Mother Goddess who is known as the Mansa Devi. The devotees come to this place from far and wide and usually worship the deity with coconuts, fruits, marigold garlands and incense sticks. Mansa Devi temple is one of the most frequently visited temples in Haridwar.

The temple is regarded as one of the Siddhpeeths in the lofty mountains of the Himalayas. As the legend goes, Goddess Sati, the wife of Lord Shiva, sacrificed herself to the bonfire. The Lord was very angry and hurt at the death of His wife and started to roam the whole of the country with Her body. On His way, parts of Sati's body fell here and there. Each of these places later became a place of pilgrimage and is called a Siddhpeeth.

It is said that the naval and heart of Sati fell in the place where we have the Mansa Devi temple at Bilwa hill. 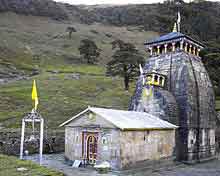 One among the famous Panch (five) Kedars, the temple of Madmaheshwar is situated at a height of 10,400 feet from sea level, on the slope of a ridge, 25 km north-east of Guptkashi. There is a motorable road from Guptkashi to Kalimath. A towering statue of Har Gauri measuring over a meter high is found in the Kali temple at Madmaheshwar.

The trek from Kalimath to Madmaheshwar is characterised by wild and amazing natural beauty and encircled by the Chaukhamba, Kedarnath and Neelkanth peaks. Gaundar at the junction of the Madmaheshwar Ganga and the Markanga Ganga, is the last settlement before one finds oneself at Madmaheshwar, the place where Lord Shiva gives darshan in the form of the belly or the navel.

Madmaheshwar is a delightful village in Rudraprayag district. The village is known in the tourism circuit for its peaceful milieu. The place is famous for Madmaheshwar temple, a sacred shrine consecrated to Lord Shiva. Dolda Tibba, a picturesque peak, is another attraction nearby.

Ransi, Raun, Kalimath, Sonprayag and Gaurikund are located in the vicinity of Madmaheshwar. Ukhimath, a notable Hindu site of pilgrimage, famous as the winter seat of Lord Kedarnath, is quite close to this place.

One of the best temples in Uttarakhand, this is situated in Dehra Dun, the temporary capital of the state. The temple was constructed in the ancient times and enshrines Lord Shiva. Lakha Mandal is popular among the people who belong to the Shakti cult. They believe that a visit to this temple will bring an end to all their misfortunes and ill destiny. They gladly accept the trouble to come over to this place from far and wide solely in search of peace and eternal bliss.

Lakha Mandal temple lies 75 km from Dehra Dun and 125 km from Missouri. It is a temple that exhibits the north Indian temple style in architecture.

This shrine lies in Haridwar and was constructed by King Vikramaditya. He built this temple in the memory of his brother Bhatrihari's prolonged spiritual quest that he made on the banks of the river Ganga. Har Ki Pauri is situated near the sacred Brahmakund. 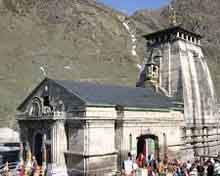 The temple of Gaurikund lies at 5 km from Son Prayag over an altitude of 1,982 metres above sea level. It is located on the way to Kedarnath.There is a famous hot spring in Gaurikund. The temple enshrines the idol of the Goddess Parvati. She is one of the many forms of Goddess Durga and is supposed to be the Goddess of strength and power.

The devotees come here from the remote areas to pray to the Devi and firmly believe that a visit to this shrine will bring an end to their sorrows. They also believe that they will get the adequate 'Shakti' or strength from the deity which will help them fight against all the adversities of life. 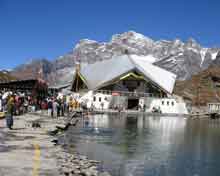 The temple is in Joshimath, a well-known place in the state of Uttarakhand in India. Hemkund Saheb is a place situated at around 4,329 meters above the sea level. It is a popular site of pilgrimage for the people from both the Sikh as well as the Hindu communities.

The 10th Sikh Guru Govind Singh meditated on the shores of the Hemkund Lake near the Hemkund Saheb. He took this penance in order to attain enlightenment. Later on the devotees of the Guru constructed the Sikh Gurudwara on the banks of this auspicious place.

The lake at Hemkund Saheb is referred by the Hindus as the Lokpal lake. They have built a Lakshman temple in its close vicinity. If you have a passion for adventure you can take a steep trek from Ghangharia to Hemkund Saheb in Joshimath. This will take four to six hours.

Panchshilas play a significant role in preserving the holy essence of the Badrinath temple. The sacred mountains present a heavenly beautiful and extremely scenic nature. Panchshilas in Uttarakhand is the designation that has been given to the assemblage of the five mountains namely:-