Ancient temples are both a tourist attraction and a pilgrim centre in Chhattisgarh which reverberates with heritage that is distinct from rest of the country.

Here are some of the prominent temples that are quite popular and attract devotees from all parts of the country. 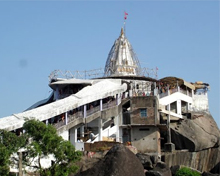 The temple is located at Dongargarh in Rajnandgaon district of Chhattisgarh.

It is on a hilltop of 1,600 feet and is also referred as Badi Bambleshwari temple.

Another temple at ground level, the Chhotti Bambleshwari is situated about 1.5 km from the main temple complex.

The twin shrines are revered by lakhs of people in Chhattisgarh who flock around the shrine during the Navratris of Kavar (during Dussehra) and Chaitra (during Ram Navami).

Jyoti Kalash is lighted during Navaratris. 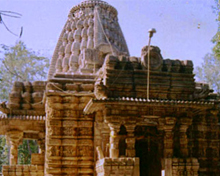 It is situated in a midst of mountain ranges which are dedicated to Lord Shiva.

The complex is made up of a group of four temples of which the earliest is a brick-temple.

The main temple is the Bhoramdeo temple built in stone.

The uniqueness of this temple located near Kawardha is its architecture and it is termed as one of the most beautifully decorated temple ever seen.

Another temple within a distance of about 1 km from Bhoramdeo, which is mentioned along with the Bhoramdeo complex, is the Madwa Mahal, meaning marriage hall in local dialect, also known as Dullhadeo.

It was built in 1349 CE during the reign of Ramchandra Deo of the Nagavanshi dynasty and has a unique Shiva Linga erected over 16 pillars.

The best way to reach this temple is from Raipur from which taxi services are available. 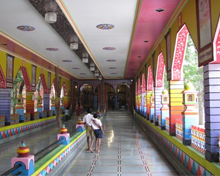 This village lies about 60 km from the state capital of Raipur viaArang.

The village is identified with Champaranya and therefore has religious significance as the birthplace of the Saint Mahaprabhu Vallabhacharya, the reformer and founder of the Vallabh sect also known as Pushtimarg.

A temple has been constructed in his honour.

The followers of Saint Vallabhacharya visit this temple tocelebrate his anniversary in the month of April-May (Baisakh).

Near this is a temple of Champakeshwara Mahadeva. There are two Baithakji's of Lord Vallabhacharya Chaurasi Bethak. 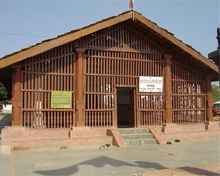 The temple is dedicated to Goddess Danteshwari representing one of the 52 Shakti peethas across the country.

The temple was built in 14th century by the Chalukyas of the South.

The temple is located in Dantewada town situated 80 km from Jagdalpur tehsil.

Dantewada is named after the presiding deity of the earlier Kakatiya rulers.

Traditionally she is the Kuldevi (family goddess) of Bastar state.

According to legend, the temple is the spot where the 'Daanth' or tooth of Goddess Sati fell, when all the Shakti shrines were created in the Satya Yuga.

Every year during Dusshera thousands of tribals from nearbyvillagesand jungles gather at Danteshwari temple to pay homage to the goddess.

The presiding deity will be taken out of the temple in an elaborate procession, now a popular tourist attraction, as part of the 'Bastar Dussehra' festival.

There is a tradition of lighting Jyoti Kalashas during Navaratris. 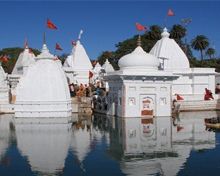 This temple is at the height of 3,500 feet in the Maikal Mountains. The shrine is a famous pilgrim spot for Hindus across the country.

Amarkantak is a veritable paradise situated amongst the dense forests and hills in Chhattisgarh.

This religious place is the source of one of the most venerated rivers of central India -- the mighty Narmada -- and also River Sone.

For Chhattisgarhi people, Narmada River is more than a holy river.

Its waters are the wellspring of life and prosperity in the region.

Narmada begins its journey at a place called Mai ki Bagiya in Amarkantak.

Along with Narmada River, the waterfalls of Dugdha Dhara and Kapil Dhara attract both the devotees and tourists alike at Amarkantak. 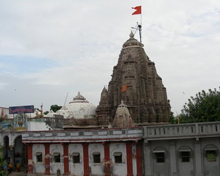 The Mahadev Ghat is situated on the banks of the river Kharun, located 5 km from Raipur.

It is a highly revered shrine of the Hindus and the presiding deity is Lord Shiva.

The Hatkeshwar Mahadev temple was built in 1402 by Hajiraj Naik during the rule of Brahmadeo Rai, son of the Kalchuri king Ramachandra.

The temple is dedicated to dual Goddess Lakshmi and Saraswati.

It is located in Ratanpur along the Bilaspur-Ambikapur state highway and is one of the 52 Shakti Peethas, shrines of Shakti, spread across India.

Ratanpur is a small city, full of temples and ponds, situated around 25km from Bilaspur district.

The temple is also known as Shivani Maa temple.

It is believed that the goddess here is a combination of two divine personalities, namely Durga Maa and Kali Maa.

The beautiful city of Kanker is a municipality in the Kanker district.

Kanker district is located in the southern region of Chhattisgarh.

The five rivers that flow through the district include Hatkul, Mahanadi, Turu, Sindur and Doodh. 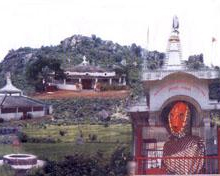 It is located in Bagbahara near Raipur and is the site of religious monuments of national importance.

It is well known for its rich architecture. Many devotees visit this shrine during Navaratris.

Bagbahara town is famous for the temple at Chandi Dongri. Thousands of devotees from the adjacent area to visit the temple in Navratri.

The town of Bagbahara is also known for wild bears who visit the temple daily during aarti (prayer) and bows in front of goddess.

This temple is famous for its devotees who worship Lord Vishnu.

It was built in the 12th century and the shrine follows strict religious rituals expected from its devotees.

This Vishnu mandir were built by Kings of Hayhay Vansh, near Bhima Talab in Janjir during 12th Century.

It was constructed in two parts to make a full temple, but both the parts could not be assembled in time.

As a result, the two entities of the temple are lying on the ground separately and the temple remains uncompleted.

Due to this, the temple is also called as "Nakata-Mandir" by local people.

On the walls of the temple are the statues of Gods and Goddess with many sculptures worth a watch for tourists in particular. 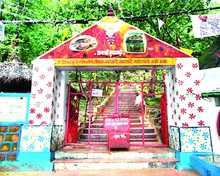 The Maa Bagheshwari Devi temple is dedicated to Goddess Kudargarhi.

The temple is perched on top of a hill and is the major attraction in Kudargarh.

The history of the temple is unclear. It is said, the temple was built by Baland Kings.

Balands were the original rulers of Korea state in the 17th century.

Devotees throng this temple to appease the goddess for the fulfilment of their desires.

On fulfilment of their wish, the Goddess is offered with the blood of a goat which is poured into a small hole (kund) of 6 inch indiameter.

It is said that the kund would not get filled up even if thousands of goats' blood is poured into it. 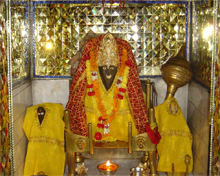 It is accessible by train, with the mandir 5 km from Raipur Railway Station.

The temple of Baglamukhi was established by Yogiraj Youdhishthir Maharaj.