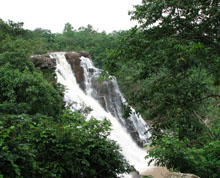 Endowed with natural bounties like waterfalls, streams, hills, dense forests and natural parks, Bastar region is an important tourism destination in the Dandakarnya region in Chhattisgarh.

A predominantly tribal district, Bastar is visited for its ancient temples and tribal way of life whose each aspect is colourful and charming.

Jagladpur, the headquarter town of Bastar district, has an array of attractions with a rich tribal culture. The indigenous tribal folks living here with their traditions and varied customs attract tourists.

Jagladpur is a good base for visiting other important places of interest of the Bastar district. Besides, at the nearby villages of the township, the visitor encounters with the colourful indigenous tribal people in their natural habitat.

Bastar is known for its traditional Dasara (Dussera) festival when the Marias, the Murias Gonds and the Durbas carry their gods in palanquins by dancing, drumming and singing.

Places of interest in Bastar

One of the remnants of the past, the Bastar Palace belongs to the royal family of Bastar which was a princely state during the British Raj. Embellished with beautiful carvings and engravings, the palace should be visited during the Dussera festival when it is illuminated and many of its rooms are left to the tribal people.

Known for a large Hanuman Idol, the place is visited by devotees and curious minded. 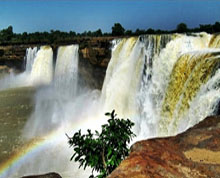 50kms west of Jagdalpur in the Bastar district, the inviting spot where Indravati, a tributary of the Narmada, cascades down from a height of about 29 metres (95 feet) resulting in the creation of the horse-shoe shaped Chitrakoot Falls, is one of the foremost travel destinations of Chhattisgarh.

On the way to Chitrakoot is located the Chitradhara Waterfalls which is located near a serene village named Potanar, 19 km from Jagdalpur.

One of the 52 Shakti Peethas Dantewada, 80 km from Jagdalpur, is famous for the sacred shrine of Goddess Danteshwari which is flocked by devotees in large number.

Endowed with rich bio diversity and spectacular scenic beauty, Kanger Valley National Park, 40km southwest ofJagdalpur, offers veritable satisfaction to the naturalists, wildlife lovers and birdwatchers. 4 km from the park are located the Tirathgarh Falls. Kutumsar Cave and Kailash Cave are known for wonderful stalagmite and stalactite formations. Bhainsa Darha Lake in the park is the natural habitat of crocodiles and tortoises.

Located 4 km from the city centre of Jagdalpur, the Anthropological Museum is one of India’s finest museums dealing exclusively with the culture, history and lifestyle of the tribal groups and is an invaluable introduction to the indigenous peoples of Chhattisgarh. For those interested in the native cultures of Chhattisgarh this museum should be a must visit attraction. 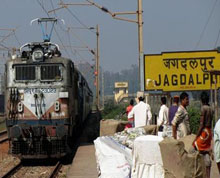 Where to stay in Jagdalpur

Besides many budget hotels, Naman Bastar and Devansh Residency are two of ghte top-end hotels to stay at.

Jagladpur is almost equidistance (about 300 km) from Raipur, the capital of Chhattisgarh, and Visakhapatnam, the famous port city of Andhra Pradesh. Different airlines fly to Raipur and Visakhapatnam from different cites in India.

Jagladpur is connected by motorable roads with different places in Chhattisgarh including Raipur and Bilaspur. Apart from these buses also ply from Jagdalpur to Vishakhapatnam , Vijayawada, Rajahmundri in Andhra Pradesh, Hyderabad in Telengana ,and Jeypore and Koraput in Odisha.