The state is located in a central region with Uttar Pradesh and Jharkhand in the north and northeast; Odisha from the east, Telangana in the south; Maharashtra and Madhya Pradesh sharing the borders in the south-west and north-west.

With a total population of 25.5. million spread over 1.35 lakh sq. km, Chhattisgarh is the biggest producer of electricity and steel in the country.

Gifted with mineral wealth and forest cover, the state is one of the fast developing regions in the country.

More than one-third of the population consist of the scheduled castes and scheduled tribes. Among the tribes, the Gonds form an important constituent.

The state was created on 1 November 2000 by bifurcating the 16 Chhattisgarhi speaking people in the south-eastern districts of Madhya Pradesh with Raipur as its capital.

People and land forms of Chhattisgarh 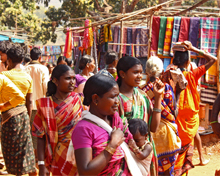 At present, the state has 27 districts and nearly three-fourths of its people are living in rural areas.

The southern parts of Chhattisgarh have fewer people compared to places in the north where there are large settlements.

The urban growth is witnessed in the areas close to Raipur-Bilaspur belt in the middle region of the state and in Raigarh in the eastern part.

With huge investment in mining industries, there has been an appreciable growth in Durg and Bhilai Nagar (west of Raipur), Korba (north central) and Ambikapur (north) resulting in the setting up of physical and social infrastructure for human settlements.

Raipur, Durg-Bhilai Nagar and Bilaspur are being transformed into major urban centres with a number of industrial bases coming up.

Chhattisgarh is basically an agrarian state. There is a mass exodus of labour when farming comes to a halt between January and June due to seasonal changes.

Many families migrate to Haryana, Rajasthan, Delhi, Punjab and Himachal in search of opportunities to work as farm labour.

Chhattisgarh plain is located in the upper Mahanadi River basin.

The basin proper is at an elevation that ranges from about 800 to 950 feet above sea level. The plain has variations in topography due to extensive denudation of soil.

Knolls (hills and mounds), undulating interfluves - upland areas between watercourses - and valleys surrounded by clay soils are the characteristics of Chhattisgarh plains.

Origin of the word "Chhattisgarh"

The word became famous during the time of Maratha empires and was first used in an official document in 1795.

It is said that Chhattisgarh got its name from the 36 ancient forts located in the state ("chhattis" means 36 and "garh" is fort in Hindi).

However, experts differ with this etymological link as the said, 36 forts could not be archaeologically identified in the region.

Another historical view is that Chhattisgarh is the corrupted form of "Chedisgarh" which means "Empire of the Chedis".