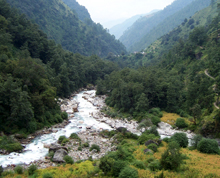 A new landlocked state emerged on the Indian map when Chhattisgarh, with an area of approximately 1, 35,194 square km, became the 26th state of the Indian Union on November 1, 2000.

Its reputation as "Rice Bowl of Central India” is accredited to the extensive cultivation of rice in the central plains of Chhattisgarh lying in the fertile upper basin of the Mahanadi and its tributaries.

Ancient monuments, temples, palaces, rock paintings and Buddhist sites are scattered throughout the state, while in the 3 national parks and 10 wild life sanctuaries of the state there are thousands of species of wildlife, some of which are rare or endangered species. Chhattisgarh offers an astounding landscape of cascading waterfalls some of which are finest in India.

Chhattisgarh, which literally translates into thirty-six forts, is a perfect balance between ancient times and now.