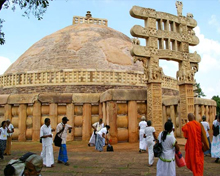 Apart from regular devotees, these places of worship attract thousands of tourists from across the country as they have a quaint charm of bygone eras.

The name 'Chaturbhuj' in Sanskrit means 'one who has four arms' referring to Lord Rama, an avatar of Lord Vishnu.

The temple has a complex multi-storied structure which is a blend of temple, fort and palace architectural features.

The temple was originally built to deify an idol of Lord Rama.

But this main deity was however was installed in the Rama Raja temple inside the Orchha Fort complex.

At present an image of Radhey Krishan is worshiped in the temple.

This grand temple gets thousands of visitors every year because of its beautiful architecture.

The exterior walls of is designed with various religious symbols while the interiors are plain and simple that offers you the divine solace.

The congregation hall where the devotees gather to offer prayers is criss-crossed in shape.

Spires have been built above the sanctuary of the temple.

The magnificent temple is one of the finest venues in MP for one to go and seek the divine solace.

The environment of the temple is peaceful and calm.

The temple is spacious enough to accommodate a large crowd and is lighted throughout the day with the sunlight.

It is said the Chaturbhuj temple resembles a lot to the Kushak Mahal in Chanderi.

An ancient temple dedicated to Lord Ganesh is located on the banks of Shipra river.

The word "Chintaman" stands for one that reduces anxiety.

The distance from the local railway station to this Ganesh shrine is 5 km.

The temple is quite popular among the locals of Ujjain who gather in large numbers during festivals and religious occasions. 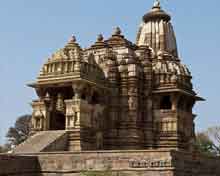 Also known as Jagadambika or Devi Jagadambika temple, it is a cluster of nearly 25 religious places located at historic town Khajuraho.

The entire Khajuraho is considered as UNESCO World Heritage Site as the town is littered with ancient ruins, monuments, shrines and archaeological sites.

Devi Jagadambi temple is one of the delicately adorned temples at Khajuraho.

All the temples in the Khajuraho region were constructed by the monarchs of the Chandella kingdom in the middle of 10th and 12th centuries.

The Gajanan Maharaj temple has been built in various regions of India.

The followers of Sant Gajanan Maharaj have taken the initiatives to build a number of these temples across holy places in India.

On such temple in Indore, the commercial capital of Madhya Pradesh is at Paliwal Nagar.

The distance from the heart of the city is just 15 minutes by car or taxi.

The Kandariya Mahadeva ranks as the biggest and most embellished temple among the famous middle-aged clusters of Khajuraho temples.

At present, Khajuraho is one of the famous tourist destinations in the country and at one time, the place served as the spiritual centre of the Chandela Rajputs. 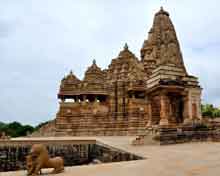 The temple is a part of the UNESCO World Heritage Site.

The exquisite temple with murals, sculptures and carvings was constructed by Vidyadhara, who was regarded as one of the famous monarchs of the Chandela dynasty.

Within the temple, there is a Shivalinga made of limestone which is dedicated to Lord Shiva.

The responsibility of safeguarding this place of worship is entrusted with the Archaeological Survey of India (ASI).

Mahakaleshwar Jyotirlinga is a popular Hindu temple at Ujjain in Madhya Pradesh.

The temple is devoted to Lord Shiva and ranks as one of the 12 Jyotirlingams in the country that are the holiest dwellings of Lord Shiva.

This place of worship lies at the corner of the Rudra Sagar Lake in Ujjain.

The temple is located at the confluence of the Narmada and the Kaveririvers.

Situated at a distance of 77 km from Indore, Omkareshwar Mahadeo temple is considered one of the holiest Hindu sitesowing to the existence of a Jyotirlingam. 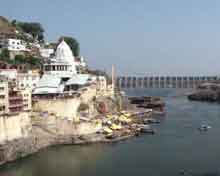 The temple was built on an island resembling the Sanskrit alphabet 'Om'.

The beautiful island is 2 km long and 1 km wide and the lingam embodying Lord Shiva is one of the 12 Jyotirlingams in the country.

The Jyotirlingam or 'lingam of divine light' is considered to draw sources of power from within itself as contrasted to an ordinary lingam which is usually endowed in public with 'mantra shakti' (power invoked through chants) by the priests.

The temple is built entirely out of a locally available soft stone which has made possible the elaborate and decorative carvings in the exterior portion.

The friezes in the upper portions of the edifice have intricate works of sculpting.

The closest railway station Omkareshwar Road is situated on the Ratlam-Indore-Khandwa line.

Omkareshwar temple is just 12 km from this railway station.

Local buses ply on the Indore-Omkareshwar route at regular intervals.

However, the degree of significance of this temple is not like the mythically consecrated Lord Pashupatinath temple in Kathmandu, Nepal. 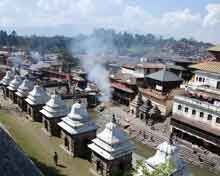 The major god worshipped here is Lord Pashupatinath which is a depiction of Lord Shiva.

The most attractive feature of this temple is that there is a Shivlingawhich boasts eight faces of Lord Shiva.

There are four gateways of the temple on all its four sides.

Lying on the riverbanks of the Shivna River, the temple is a major place of worship in the city of Mandsaur.

The spatial dimension of the temple is unique and its architecture rekindles the nostalgia of a prosperous kingdom of the past.

There is a gold-plated pitcher on top of the spire (tower) or 'kalash'which weighs 100 kg.

The famous Shyam Kaka Temple was constructed in 1845 A.D.

This religious place of worship has been devoted to Lord Krishna.

Many people don't know that Lord Krishna is adorably called as Shyam.

The temple is situated in Shaka Jagir village in the district of Rajgarh in MP.

The temple is located near Narsinghgarh and at a distance of 100 km from Bhopal, the capital of the state.

The Archaeological Survey of India proclaims it as a protected site.

The temple lies on the renowned western part of the Khajuraho temple compound. 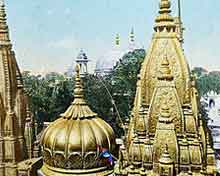 This religious place of worship is devoted to Lord Shiva and is famous for its huge sculptural affluence.

The temple was constructed in the early part of the 11th century.

Starting from the entrances of the holy place to the central hall of the temple, the Vishwanath temple is resplendent with stunning rocky sculptures.

The temple features one of the most striking architecture and design elements among all the religious sites in Khajuraho.

The southern entrance of the temple is protected by elephants.

In addition, the principal shrine of the temple houses a bust of Brahma with three heads.

This is also known as Takhaji temple, a popular place of worship located in the district of Mandsaur.

The shrine is the abode of Taxak, the serpent king and he is worshipped in the form of Lord Taxakeshwar.

However, the locals know the god in the name of Takhaji. The shrine is located on Hinglajgarh Road at a distance of 22 km from the town of Bhanpura.

The site is quite popular in terms of scenic beauty.

In 1821, this site was toured by James Tod, an Oriental scholar and an English administrator of the British East India Company.

He was stunned by the natural beauty of the place.

The effigy of Lord Dhanvantari is set up before the figure of Taxaka.

In addition, the principal temple also houses the sculpture of Shiva, which is regarded as the husband of Taxaka.

The temple is situated atop the Arera Hills and is one of the most important shrines in Madhya Pradesh.

It is located in a position which offers a breath-taking and panoramic view of Bhopal. 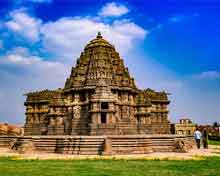 This is owing to the fact that the Birlas, one of the most respected industrial families hailing from India, have undertaken the entire process of its construction and maintenance.

In order to focus on Goddess of wealth Lakshmi and her celestial husband Lord Vishnu, the temple is dedicated to the main deity Lakshmi Narayana.

Apart from shrines devoted to the worship of Goddess Lakshmi and Narayana, the temple also houses a magnificent idol of a reclining Shiva with his wife Parvati.

Next to the temple is the Birla Museum that contains a vast repository of exquisite sculptures from the Mandsaur, Shahdol, Sehore and Raisendistricts of Madhya Pradesh.

The collection dates back to the 12th century era of the Paramaras when art and culture flourished in the state.

The temple is sandy yellow in colour and has an old-world air pervading the place.

A grand archway welcomes devotees followed by expansive lawns around the temple which offer an aesthetic appeal to the complex.

Also known as Kalighat Bhopal, the shrine lies on the side of the picturesque lower lake.

The temple was established by Shiv Narayan Singh Bagwar with the auspicious consent of Kali, the Hindu deity. 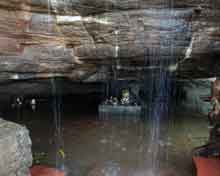 The famous Gufa Mandir lies at a distance of 7 km from the state capital on the Lalghati-Narsingh Road.

A Shiva temple was set up in the cave by Sant Narayan Dasji Maharaj and as a result of this, the temple is known as Gufa Mandir.

Situated atop a hill is the beautiful pilgrimage spot for Jain devotees.

Also known as Mahaveer Giri, it is known for its exquisite architecture and panoramic views of the city.

The tekri houses the footwear of Jain saints along with an idol of Shri Man Bhadarji.

The Simha Gate of the temple features an old manuscript carved on stone.

Interestingly the language in which it is written is still to be deciphered.

It is said to be the Sadhana Sthali of Oswal dynasty. On the event of Kartik Purnima, a big fare is held in the temple every year.

The temple is situated on top of the hill near Lal Ghati which is 7 km from Bhopal.

You can either take the ropeway up the hill or walk up from the base of the hill to reach the Jain temple.

Buddhist circuit is popular is Madhya Pradesh as tourists and visitors from south-east Asia arrive in large numbers to pay their respects to these much revered sites. They are Dharmrajeshwar; Deur Kothar; and Sanchi among others.