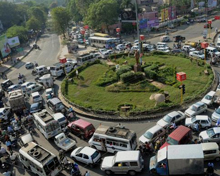 Indore, the commercial hub of Madhya Pradesh and capital city Bhopal face a number of traffic violations due to steep rise in the number of vehicles and the developmental activities in these two cities.

Moreover, the vehicles have to contend with narrow roads which can't be widened as buildings and commercial outlets occupy the prime space.

In order to streamline traffic, Indore police have taken up campaigns to sensitise the public.

The adoption of high-tech digital systems like RLVD has come in handy to penalise habitual violators of road norms in Indore.

Drunken driving, reckless driving and jumping the traffic signals are common in Indore which is a much bigger city than Bhopal.

Indore traffic department has installed 194 cameras under the Red Light Violation Detection (RLVD) system at 15 main squares of the city. 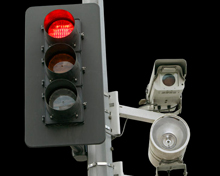 The hi-tech system is expected to set up an intelligent traffic management in the city whereby violators will be issued automated challans for jumping the red light.

A new system in which the traffic violators are sent text messages (SMS) the moment an e-challan is issued in their names for disobeying the road regulations is facilitating the process of micro-managing the vehicular flow.

Traffic police are in talks with the MP government to make the online payment of challan possible.

At present, a motorist in Indore is fined Rs 500 for jumping the red light at busy intersections.

The days of breaking traffic rules with impunity by skipping the red light, tripling on two-wheelers, not wearing helmet or having wrong number plate will be a thing of the past, according to senior traffic police officers.

It is suggested that the licences of repeated violators have to be suspended or even cancelled as a deterrent punishment.

However, the police are yet to decide on the number of violations that would trigger suspension or revocation of licence.

The RLVD system was started on a pilot basis at the Lantern square and Pipliyahana square in January 2015 to test the feasibility of the new system.

Over 22,000 challans have been issued in the first three months since the RLVD system was installed at the two squares in Indore in January 2015.

Challans via SMS in Indore 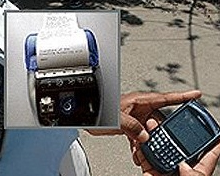 Within just three days of becoming operational, more than 1,500 people have received challans via text message for traffic violations at intersections equipped with the RLVD system in Indore.

Each time a vehicle crosses while the red light is still on, the RLVD system takes a photo of the license plate, which is then read by software and details of the offender is gathered from the regional transport office (RTO) automatically.

A person is slapped a fine of Rs 500 each time for jumping a red light and immediately gets a text message on the number he or she has uploaded at the regional traffic office at the time of issuance of registration numbers.

This has cut down on the time taken for issuing the challan from the previous 15-20 days to just minutes.

People can pay the challan amount at the traffic department headquarters by showing the text message with the registration number of the particular vehicle.

The traffic department was looking to introduce an online payment option and has sent a proposal to the financial department in this regard.

Indore Development Authority (IDA) has plans to construct 5 flyovers at main business areas in the city to ease the problem of traffic congestion.

A feasibility study has been undertaken by the IDA for the construction of flyovers so that traffic hold-ups during peak hours can be addressed on AB Road, Transport Nagar and Collectorate areas in Indore.

The authority is planning to construct over bridges at Vijay Nagar square, Palasia, Tower square, Mhow Naka and Shivaji Vatika. 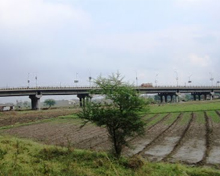 The identified places are key business areas in the city and form important junctions, where the vehicular flow is heavy and traffic jams are daily affair.

Three out of the five flyovers are being proposed on AB Road.

After the construction of Bus Rapid Transit System (BRTS) corridor on AB Road, the width of the road was reduced by half.

This has led to bottlenecks at busy junctions such as Palasia, Vijay Nagar, Shivaji Vatika, Industry House areas causing major inconvenience to the commuters.

It was felt that for Indore to be elevated as one of the top smart cities of India it needs at least 20 flyovers in the near future to streamline the movement of vehicles.

A light metro rail is also on the pipeline for Indore.

The IDA is given the task of analysing the traffic movement and sending the final report to the state government.

Since the route for the upcoming light metro rail has been fixed, IDA is planning to build flyovers where the city is devoid of metro rail connectivity.

Every hour, one life is lost in a road accident in Madhya Pradesh, while at least eight suffer critical injuries.

This is part of the critical report of the Union ministry of road transport and highways.

Accident deaths have risen in Madhya Pradesh since 2011 while it dipped nationally for two consecutive years - 2012 and 2013.

Statistics reveal the state highways maintained by the MP government are bloodier stretches than national highways.

At least seven lives are snuffed out every day on state highways in MP while the average death rate on national highway is 6.

It is to be noted that urban areas account for lesser road accidents in comparison to rural areas.

At least 3,766 people died in urban areas while as many as 4,822 lives were lost in road accidents in rural areas in MP.

There has also been a sharp rise in deaths due to speeding and driving under influence of liquor or drugs. 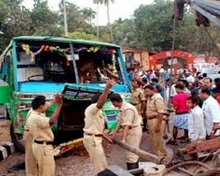 Residents and the administration in Bhopal finally have something to cheer about.

According to them, the decrease is significant as the number of deaths in road mishaps generally increases with every year.

In Bhopal too, the figure kept peaking over the years.

With the growing population and the increase in the number of vehicles, the number of deaths and accidents generally witness an increase.

However, in Bhopal, the trend has changed and there are fewer deaths.

The helmet drive is a major reason for this positive change, according to police officers.

The trend reversed for the first time in 2013 when Bhopal recorded 257 deaths.

There are many traffic policemen at the busy junctions in Bhopal.

The use of gadgets to check rash driving and strong focus on wearing helmets are the reasons for the decline in fatal mishaps.

Besides, CCTV surveillance and the issuing of challans to people for violation of traffic rules have created awareness.

Traffic police have organised campaigns to make teenagers in schools and colleges aware about road safety.

Moreover, the delineators have been installed on the Bhopal roads to check reckless driving.

'No helmet, no petrol' rule 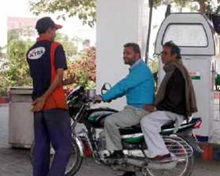 In a move aimed at improving safety on roads, the MP government has directed collectors to ensure implementation of the 'no helmet, no petrol' rule.

The district collectors were asked to rigorously implement Section 10 of Motor Spirit and High Speed Diesel Oil Order, 1980, which allows punishment to those guilty under the Essential Commodities Act, 1955.

State government has issued a letter to collectors to enforce the use of helmet across MP.

Besides, awareness posters would also come up at all petrol pumps to inform riders to wear helmets for refuel.

According to data, every one minute a person dies and four are injured seriously in road accidents across the nation.