Situated in the state of Madhya Pradesh, Khajuraho is one of the well known tourist attractions of India. Its claim to world fame lies in the magnificent temples built by the Rajput rulers of Chandela dynasty who held sway over the modern Bundelkhand region from 950 AD to 1203 AD.

Khajuraho was the religious capital of the Chandela dynasty. The Chandela rulers were prolific builders who built not 1 but 85 temples at Khajuraho. However, only 22 of the original 85 now survive. After the decline of the Chandela rule before the onslaught of the invading armies of the Delhi Sultanate, these UNESCO World Heritage Site monuments fell into neglect. Today these temple are divided into three sections: the Eastern, Western, and Southern groups.

The Khajuraho temples are dedicated to Lord Shiva, Lord Vishnu and the Jain Tirthankaras, displaying the secular nature of the Khajuraho. These temples are widely known not only for their architectural grandeur but also for the intricacy and profusion of sculptural embellishments on the walls. 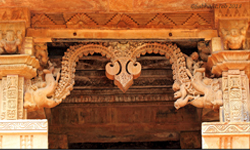 Of these crowning jewel and the largest is Kandariya Mahadeva dedicated to Shiva.. Chausath Yogini and Adinath Jain Temple are other famous temples of Khajuraho.

The airport is located at a distance of 5 kim from the city centre.