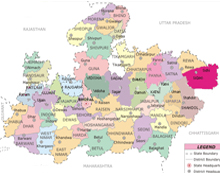 Madhya Pradesh, situated in the centre of India, is often called the heart of India. It is surrounded by Uttar Pradesh, Chhattisgarh, Maharashtra, Gujarat and Rajasthan. It is a state that has some very scenic spots with a rich eco system and a thriving natural wild life. The place has a rich history with many landmarks places for the eager tourists to learn about and experience. Be it the Kajuraho temple or the Sanchi Stupa or the Bhimbetka caves- the ancestors of this state have left behind a rich legacy that can often be described the pride of the nation. 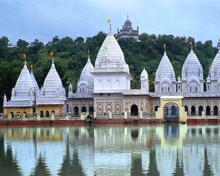 Other main attractions include Omkareshwar Temple, Neelkanteswara Temple, Mahakaleshwar Temple, Orcha Temple, Sanchi Stupas, Teli Ka Mandir, Satianusuya Temple, Badeganeshji Ka Mandir, Deogarh Temple and Bhojeshwar Temple. Then there is Ujjain which is also the venue of the popular Kumbha Mela that is conducted every year. 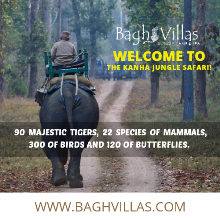 The state is teeming with rich biodiversity with vast acres of land with a thick cover of dense forests and natural wildlife. Madhya Pradesh has 9 National Parks and 25 Wildlife Sanctuaries, spread over an area of 10,862 sq. kms. The Kanha National Park and Bandhavgarh National Park are popular wildlife spots in the state. 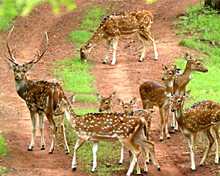 Madhya Pradesh has been ruled by several rulers over the centuries. While they have gone we can still get a glimpse of their era by looking at the monuments they have left behind. Some of the popular forts and monuments are Gwalior Fort, Bandhavgarh Fort, Chanderi Fort, Madan Mohan Fort, Sanchi Stupas, Khajuraho Temples, Jehangir Mahal, Jahaz Mahal, Hathi Mahal, Dil Ka Mahal, Raj Mahal, Hindola Mahal, Man Mandir Palace, Jai Vilas Palace, Lal Baag Palace and George Castle.

Tourist visiting Madhya Pradesh can also visit Amarkantak which is the meeting point of the Vindhya and the Satpura mountain ranges. Blessed by Mother Nature, Amarkantak offers lofty mountain ranges, breathtaking waterfalls and beautiful valleys. This is perfect for tourists who love trekking.

Bhopal is the capital of Madhya Pradesh and can be described as a mix of the old and the new. It is a city that has its commercial merits and yet retains its scenic beauty and old world charm. Twenty eight kilometers from Bhopal, is Bhojpur, a place that is a must-visit for its magnificent Shiva temple and Cyclopean dam. Chanderi is another place that is a hot spot for its hand woven sarees and other shopping accessories. Some of the other places that tourists can check out is Panna, Orchha, Omkareshwar, Mandu, Jabalpur, Shivpuri, Sanchi, Pench 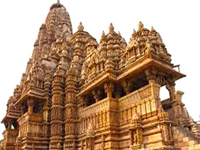 Khajuraho group of temples are famous for their superb expression of Indian architecture. Khajuraho is a village located in the state of Madhya Pradesh, Chhatarpur District, about 385 miles southeast of Delhi, India These are 10th-11th century old temples and symbolize religiosity, support, artistic mastermind and artistic feeling.

These temples are constructed in the classic 'Nagara' style of architecture during the Chandella dynasty. According to records, they depicts two different religions – Hinduism and Jainism.

The sculptural embellishments include, besides the cult images; parivara, parsva, avarana devatas, dikpalas, the apsarases and sura-sundaris which win universal admiration for their delicate, youthful female forms of ravishing beauty.

The garments and decoration embrace the charming grace. The Khajuraho group of monuments has been listed as a UNESCO World Heritage Site. 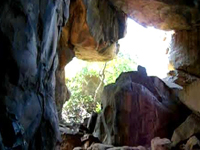 The Bhimbetka rock shelters are an archaeological place of the Paleolithic, exhibiting the earliest traces of human life on the Indian subcontinent, and thus the start of the South Asian Stone Age.

It is situated in the Raisen District in the Indian state of Madhya Pradesh, near Abdullaganj town and inside the Ratapani Wildlife Sanctuary. At least some of the shelters were occupied by Homo erectus more than 100,000 years ago. Bhimbetka got its name to the characters of the longest epic in the world, the Mahabharata.

It is thought that when the five brothers, called Pandavas, were expelled from their monarchy, they came here and stayed in these caves, the huge rocks seating the oversize frame of Bhima, the second Pandava. Another evidence found related to this story is the resemblance in names of the nearby places with the names of the Pandavas.

Bhimbetka is a natural art walkway and an archaeological gem. For miles together, the footsteps of the prehistoric man can be easily distinguished upon the sands of time, since the caves here house rock paintings, created by man from as early as about 15,000 years ago in bright and panoramic detail.

The rock paintings have several layers belonging to various epochs of time, ranging from the Upper Palaeolithic, Mesolithic Age to the prehistoric, early historic and medieval periods. The most ancient sights believed to be belonging to the Mesolithic Age. These wonderful paintings can be seen even on the ceiling of the rock shelters sited at daunting heights.

Stone Age rock paintings are found among the Bhimbetka rock shelters which are around 30,000 years old. The caves also depict evidence of dance. They were acknowledged a World Heritage Site in 2003. 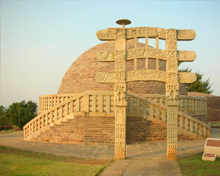 Sanchi is famous religious and tourist destination for global tourists. The Stupa at Sanchi is one monument that people must spent time as this place brings life to the vision of a realm where peace, wellbeing, good deeds and thought guided a sovereign to better things and a better life.

The site stands a huge dome-shaped stupa that is built over the relics of Buddha, by the Emperor Ashoka. He created the Great Stupa (Stupa 1) here after redistribution of mortal remains of Lord Buddha for erecting several stupas throughout the country to spread the views of Buddhism.

This stupa was initially a low structure of brick, half the diameter of the present edifice hemispherical in shape with raised terraces at the base. It was surrounded by a wooden railing and a stone umbrella at the top. This Great Stupa served as a centre to the large Buddhist formation during the later period. The structure of this divine site dates back to the 3rd and 12th century BC while the other stupas and gateways on its four sides are most probably constructed later.

Since the fourteenth century, Sanchi remained deserted and ignored till 1818 when General Taylor rediscovered the site. Sir John Marshall established an archaeological museum in 1919, which was later transformed into the present site museum at Sanchi. 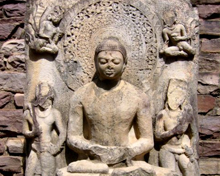 The road to and from the historical place, as well as its rail access are well developed, clean and the accommodations around it are a treat after the trek around the Stupa site. The lavish carvings, extraordinary constructions in bas relief, high relief and in the round, are an iconographic treasure trove.

The major theme characterised in the decorative work revolves around the earlier lives of Buddha. Numerous other themes were taken from legends and history.

The fresh, brilliantly charming representations of plants, animals and humans, the narrative quality of the stories and the creativity apparent in the fantastic sculptured capitals and cornices combine to make this an unparalleled masterwork of early Buddhist art. Sanchi has two other famous stupas dating from the Sunga period (2nd century BC).