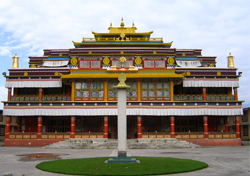 Monasteries are found in abundance in Sikkim as Buddhism is a major religion in this Himalayan state.

Hilltop monasteries and pagodas are common on the rugged terrains which are festooned with multi-coloured prayer flags that wave in high breeze.

The second smallest state (after Goa) has the least population of just over 6 lakh spread over an area of 7,096 sq. km.

Located on the lap of the panoramic Himalayas, the state has more than 28 mountains, 80 glaciers and 227 high-altitude lakes including the famous Tsongmo, Gurudongmar and Kecheopalri lakes.

There are also five hot springs and more than a hundred rivers and streams.

One can find as many as 200 Buddhist temples in the state as against a few Hindu shrines. 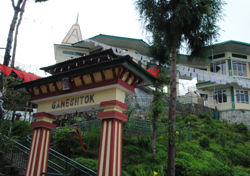 A small temple dedicated to Lord Ganesh is located at an altitude of about 6,500 feet on the Nathula-Gangtok Road, 7 km from Gangtok.

It is very small in size that it can accommodate one person at a time and that too, he or she needs to crawl to get inside the temple.

The Hindu shrine offers a bird’s eye view of several places such as the Gangtok town, the Mount Kanchenjunga and the Raj BhavanComplex.

There is small place located close to this temple which is known as Smriti Van where the devotees plant saplings on behalf of their loved ones.

The Hindu shrine is dedicated to Lord Hanuman and is one of the popular temples in Sikkim.

Managed by the Indian Army, Hanuman Tok is 5 km from Gangtok and perched at a height of 7,200 feet from the top of a hillock.

One can have a scenic view of Gangtok below along with nearby hills from the mountain top.

From White Hall on the Gangtok-Nathula highway, this temple is situated at a distance of nearly 5 km.

The royal cremation grounds of Lukshyama are located near Hanuman Tok.

The mortal remains of family members of former Namgyal dynasty were consigned to flame on this cremation ground.

According to legend, when Hanuman was flying with the Sanjeevani(mythological lifesaving herb) mountain to save Lord Rama’s brother Lakshmana, he rested in the spot where this temple now lies.

Situated in the heart of Gangtok city.

It is one of the oldest Hindu temples built in 1935 on a land donated by King Thutop Namgyal of Sikkim.

Housing all major deities, the temple is the point of convergence for the Hindus in Gangtok.

The temple was further extended to become a major religious complex in 1945-47.

It is now being upgraded further to include a multi-purpose hall and library. 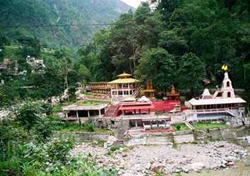 More popular as Shiva Mandir, it is located in Legship, West Sikkim, along the banks of River Rangeet.

According to legend, pleased with Arjuna’s hard penance and devotion, Lord Shiva appeared before him in the very spot where the temple lies as a Kirat or hunter and blessed him with success in the Mahabharat battle.

This temple comes under the West Sikkim district and is connected with the mythological stories of Mahabharata.

It also has a dharamshala on the premises that can accommodate over 500 devotees at a time.

The most popular feature of this temple is the annual festival of Shivarati in February.

Bala Chaturdesi is another festival of the temple, which is usually celebrated between the months of November and December.

Shiva Mandir is located 4 km from Pelling and is connected with Geyzing and Pemayangtse.

The holy seat of Hindu pilgrimage is situated atop Solophokhilltop, 5 km from Namchi in South Sikkim.

The sacred Hindu site has a 108 feet tall statue of Shiva; replicas of 12 Jyotirlingas; models of Char Dham temples of Jagannath, Badrinath, Dwaraka and Rameswaram; and an 18-feet statue of Kirateshwar, a hunter incarnation of Shiva.

The major attraction is the 108 feet, giant statue of Lord Shiva in sitting posture enclosed with twelve Lingas (temples) spread all over India.

The Sikkim government is using state-of-art technology to develop this Hindu site into a major religious and tourist hub in the near future.

This is a Nyingma Buddhist gompa in the Lachung Valley in Sikkim.

The colourful monastery was built in 1880.

Lachung means a 'small mountain' and the gompa is at an elevation of about 3,000 metres at the confluence of the Lachen River and Lachung River, both tributaries of the Teesta River.

The village is 118 km from Gangtok on the North Sikkim Highway and is the last one before the Indo-Chinese border.

It was a trading post between India and Tibet before the latter wasannexed by China in 1950.

Permits are required for visits to North Sikkim. The monastery hosts a famous mask dance each year. 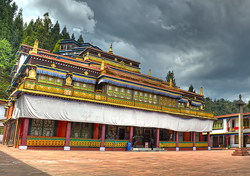 Representing the Tibetan culture, this gompa is also called the Dharmachakra Centre.

It is a focal point for the sectarian tensions that characterise the Karmapa controversy.

The monastery is located 24 km away from Gangtok in East Sikkim.

The Buddhist temple is the seat of the Karmapa Kagyu lineage outside Tibet.

The main temple is surrounded by the monks dormitory.

Inside the temple are the paintings of the Kagyu lineage -- the eight great Bodhisattvas, the sixteen Arhats and the GendukChogngi, among others.

Behind the Rumtek Monastery is the Karma Shri Nalanda Institute of Higher Buddhist Studies.

Nalanda Institute was founded to propagate the noble teachings of the Lord Buddha, particularly the Kagyu tradition of Mahayana Buddhism.

Located at about 140 km west of Gangtok, the monastery is planned, designed and founded by Lama Lhatsun Chenpo in 1705.

It is one of the oldest and most prestigious Buddhist temples in Sikkim.

Originally built by Lhatsun Chenpo as a small Lhakhang, it was subsequently enlarged during the reign of the third Chogyal ChakdorNamgyal who was considered as Lhatsun Chenpo’s third reincarnate, Jigme Pawo.

The monastery follows the Nyingma order of Tibetan Buddhism and controls all other monasteries of that order in Sikkim.

The monks of this monastery are normally chosen from the Bhutias of Sikkim. 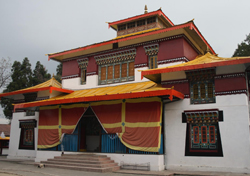 Set up in 1909 above Gangtok, the gompa belongs to the Nyingma order of Vajrayana Buddhism.

The monastery built around the then small hamlet of Gangtok became a religious centre.

The location was blessed by Lama Drupthob Karpo, a renowned exponent of tantric art in Buddhism with flying powers.

Initially a small Gompa was established by him after he flew from Maenam Hill in South Sikkim to this site.

The literal meaning of Enchey Monastery is the “Solitary Monastery”.

Its sacredness is attributed to the belief that Khangchendzonga and Yabdean – the protecting deities – reside in this monastery.

It is believed that these powerful deities fulfil the wishes of the devotees.

The monastery has a large collection of masks which are used for the ritual dances.

As its name implies, monastery has a peaceful atmosphere and also maintains a good library.

Some of the popular monasteries that dot the Sikkim landscape are: 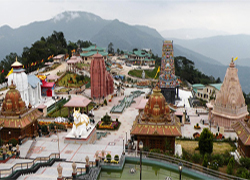 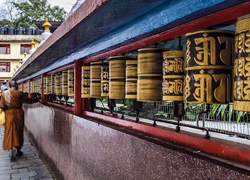