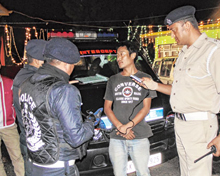 At present, the Sikkim government is giving importance to tackling the problems cropping up due to fast urbanisation of Gangtok and its surrounding areas.

New social challenges arising due to construction activities, rising vehicle population on Gangtok roads and the need for a modern town planning are being attended to on an urgent basis by the government.

A new "smart city agenda" for the mountainous regions is being planned as the conditions are starkly different from cities in the plains.

The adverse effects of unregulated construction activities in Gangtok are being addressed to by local officials.

Building more floors on top of existing buildings add to human risks as the foundations are typically weak which makesthem vulnerable to natural calamities.

New habitats have to be planned like an envelope as a growing proportion of young people aspire to own a home.

Suitable settlements along with adequate space for traffic will have to be created with the necessary infrastructure and connectivity.

Similarly, the harmful effects of commercial activity on the urban environment (air, water and land pollution) will have to be minimised.

Given the shortage of appropriate land, sewage and garbage disposal pose serious problems for Gangtok and other mountainous cities.

Special efforts are being made for the recycling of bio and non-bio waste.

More efforts are needed to regulate the number of vehicles in Gangtok and other urban centres to minimise the problemsof parking, traffic congestion and pollution.

It may be noted that Gangtok is yet to have an efficient traffic constabulary or an exclusive police wing with statutory powers of enforcement.

The condition of roads remains bad despite several attempts toimprove the quality of construction.

With a large portion getting washed out during the monsoons, net addition to roads remains low.

Connectivity has also been hampered by the absence of telecom services especially in remote hilly areas.

The inability to get mobile phone and internet connectivity has been a limiting factor placing many of the communities at a disadvantage.

Need to have public transport 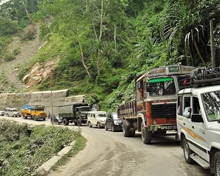 Public transportation has to be given high priority and the state will need to encourage low-polluting vehicles.

Proper planning of jhoras, drains and culverts of the roads is required in order to check landslides, road blocks and unwanted flow of excess water onto roads — all of which cause serious publichealth and related problems.

It will be critical to develop a legal regulatory framework toguide urban development including construction activities.

It is equally important to plan for services like public transport, water supply, sewerage and solid waste management.

Gangtok is well connected by air, rail and road to Siliguri, the commercial hub of North Bengal. 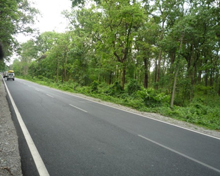 The nearest airport is Bagdogra, near Siliguri/NJP and 125 km from Gangtok.

NJP is the largest rail junction in North Bengal or northeast India.

The NJP station is always bustling as trains are arriving in all 24 hours from various directions.

However, travelling by road from Darjeeling or Siliguri/NJP to Gangtok is the best way to reach Sikkim capital.

There is helicopter service from Bagdogra airport but the timings won't suit most of the tourists.

The fare is fixed for all destinations.

From NJP to Gangtok the fare is Rs 150 per passenger. It takes about 3-4 hours to reach Gangtok from NJP depending on the road condition.

The driving condition on hills is entirely a different scenario from highways.

The vehicles are all 10-seater diesel jeeps and they take 10 passengers for a trip.

In the city of Gangtok for local travelling or sightseeing around, taxi cabs and vans are the common mode of transport.

The local fare is Rs 10 per individual from Baluakani to M.G.Road a distance of 4 km or one can book the entire vehicle for Rs 40.

For local sightseeing of 7-10 points, tour operators are available in dozens.

A trip to all the local spots and picturesque sites will cost anywhere between Rs 600 and Rs 1,000 including the journey to Rumtek Monastery and Banjhakhri Falls.

But it will be a good experience to travel 6 more hours and travel more than 100 km from Gangtok to enjoy the rich flora and fauna of the Himalayan state. 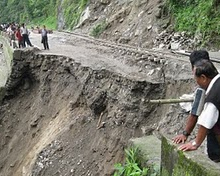 Frequent landslides are common between Siliguri in north Bengal and Gangtok.

This road hazard cuts off the connectivity between Sikkim and rest of the country quite often, especially during heavy rains and natural calamities.

As the road connectivity from Siliguri to Gangtok is of strategic importance, the Border Roads Organisation (BRO), an arm of the Indian Army, takes care of its maintenance.

However, rain-triggered landslides do paralyse this vital NH-10 road to Sikkim, thus cutting off the only link between the mainland and the Himalayan state.

It is common to see natural calamities wreak havoc on the highway between Siliguri and Gangtok causing extensive damage to this critical road connectivity.

The BRO personnel are at hand to restore the road connectivity whenever there are minor hiccups affecting the to and fro traffic to Sikkim.

It is to be noted that Sikkim depends on supplies from Bengal for sustaining the livelihood.

However, the vehicular movement to Darjeeling from Siliguri is not much affected as it falls on a different stretch and there is unhindered flow of traffic in this direction.

Kalimpong, being on the same route to Sikkim up to certain distance, is also cut off from the plains whenever there are landslides.