A fast growing state like Telangana is in urgent need of infrastructure upgrades like well-connected roads, railways and airports, besides round-the-clock power supply and irrigation channels for robust growth of industry as well as agriculture. 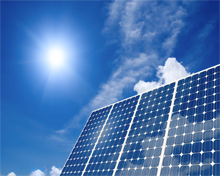 Being a power intensive state with a per capita power consumption of 985 units against the national average of 917 units (2012-13), the state is drawing up frenetic plans to augment its production capacity through progressive steps across the value chain of fuel-generation-transmission-distribution cycle to meet the various needs of industries and consumers.

However, the state has to contend with growing power deficit which is expected to touch 40,472 MU (million units) in 2018-19 with requirement at 84,496 MU as against the supply from existing sources at only 43,754 MU.

The urban development in Hyderabad and phased urbanisation in other towns of Nizamabad, Karimnagar and Warangal would need exponential power in the coming years.

Moreover, some of the big ticket projects such as metro rail, Hyderabad IT Investment Region (ITIR), Hyderabad-Nagpur industrial corridor and lift irrigation schemes would boost the demand for steady power.

The estimated solar potential in Telangana is 20.41 GW and the government is keen to promote renewable power in the state with emphasis on solar plants at select locations.

The solar roof top net metering system is being encouraged to reduce the pressure on grid supply with subsidy from the Centre. It was decided to extend 30% subsidy in the domestic sector for 1 KW of grid system for 4,200 numbers in addition to the Centre’s subsidy. 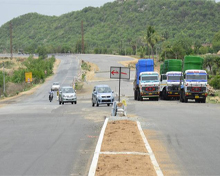 The roads and buildings department is maintaining a total road network of 26,837 km in the state.

The widening of single lane roads to double lane roads is being taken up for improving the connectivity between the different mandal and district headquarters. Under this scheme, 143 works covering 149 mandals for a distance of 1,996 kms at a cost of Rs 2,585.00 crore have been taken up.

A number of important single lane roads are being made into double lane roads with an aim to improve the connectivity for the entire state. 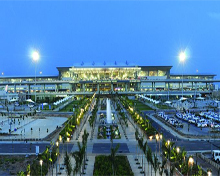 This is a PPP project and the total investment for the airport construction in the first phase is Rs 2,920 crore.

RGHIAL is a joint venture company promoted by GMR Group (63%) with Malaysia Airports Holding Berhad (MAHB) (11%), state government (13%) and the AAI (13%) as the other consortium partners.

Overall the passenger traffic has shown a growth of 18% YoY. In the same period the airport handled 7.75 million passengers.

The overall the cargo has shown a growth of 15% YoY. In the same period, the airport handled 77,266 tonnes of cargo.

The utilisation of water from Godavari and Krishna rivers, tributaries, tanks and ponds have been the major source of irrigation in Telangana.

In all, there are about 46,000 water conservation structures from very large tanks to small ponds including percolation tanks. These structures are the leading sources for meeting the irrigation of both commercial and domestic needs.

A grand strategy has been designed to facilities for irrigating one lakh acres in each assembly constituency of Telangana excluding urban areas in the coming 5 years.

Thus the government has proposed to take up two major projects and one flood flow canal that would benefit the districts of Mahabubnagar, Ranga Reddy, Nalgonda and Warangal by irrigating 13.41 lakh acres and check the floods in the monsoon season.

The rehabilitation of minor irrigation schemes sanctioned under a World Bank assisted Telangana Community Based Tank Management Project is in progress and would improve 1,182 tanks and nearly 762 schemes were completed so far.

Telangana has taken up a massive programme of restoring all the 46,531 minor irrigation sources under the project Mission Kakatiya in a decentralised manner through community involvement.

The government is aiming to complete the restoration of all the tanks in the next five years from 2015 at an estimated cost of Rs 20,000 crore.

Some of the features that have become a part of larger policies in order to create an eco-system for speedy industrialisation of the state: