Kerala is famous for its art, poets and musicians, its traditional dance forms, and its distinctive architecture.

Craft workers in Kerala continue the ancient arts of woodcarving and wall-painting.

For ages, the rich and vibrant culture of Kerala has intrigued people worldwide: the songs and dances of the people, their ballads, their rituals and their intellectual pursuits.

Truly, the real treasures of Kerala lie in the cultural heritage of its people. Kerala has its own typical art forms which reflect the life and outlook of the people viz. Kathakali, Theyyam, Koodiyattam.

Recently UNESCO brought to light, a less known art form - Koodiyattom - and declared it as one among the "Masterpieces of the Oral and Intangible Heritage of Humanity". 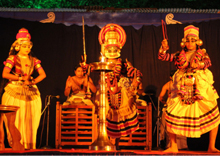 It is for the first time in the history of UNESCO that select art forms across the world have been given this recognition as part of its effort to safeguard expressions of oral heritage and traditional culture which are in danger of disappearing due to the efforts of globalization.

Kathakali is the classical dance-drama of Kerala, which dates from the 17th century and is rooted in Hindu mythology.

Kathakali has a unique combination of literature, music, painting, acting and dance. 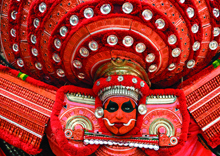 Theyyam is one of the most outstanding folk arts of Kerala and has its origin in the northern parts of the state.

Also called Thirayattam, (because every thira or village performed this ritualistic art at the village temple) this primitive ritualistic art demands long hours preparation before the performance.

The Theyyam (a form or shape) represents a mythological, devine or heroic character.

Classical dances are based fully or partly on the principles and techniques embodied in the ancient Hindu scriptures and technical texts on dance and allied arts.

The earliest of these known scripts is Bharatha's Natya Shastra believed to have been written around the second century B.C. 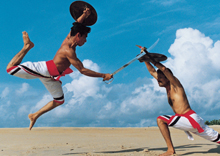 The martial arts of Kerala - Kalaripayattu - consists of a series of intricate movements that train the body and mind.

The discipline is continually practiced and complemented by Kerala's famous ayurvedic and nature cure techniques.

These are believed to have traveled to eastern China, where they inspired the evolution of other martial art forms.

'Verumkai' is the final and most difficult of lessons taught in the kalari. The others are Maithozhil - combat through kicks, Kolathiri - combat using sticks and Angathiri - the use of metal weapons. 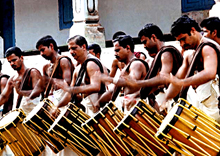 As in the rest of South India, Carnatic music is the popular classical form of music, but Kerala's own contribution is the sopana style that is slow in tempo and is rather emotional.

Kerala's folk music, on the other hand, is neither sophisticated nor refined, but it displays a strong sense of rhythm and rhyme.

The theme is usually devotional, as in Sarpa pattu, Bhadrakali pattu and Ayyappan Pattu.

The most famous of Kerala's music composers is Swati Thirunal, the Maharaja of Travancore in the early 19th century. Other contemporary composers were Irayimman Thampi and Shadkala Govinda Marar.