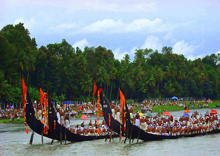 Many tourists travel across the world to India only for the green and soothing destination called Kerala. With undisturbed beauty of green and moist foliage and the lure of ayurveda, Kerala is an international holiday destination. Kerala in India still remains calm and serene though it is supposed to have the highest density of population. One wonders where they are tucked away as you roam the green belt of Kerala.

You can spot a tourist place in each and every district in Kerala. In other ways we can say the entire state is a tourist destination. The main tourism attractions in Kerala are the Kerala Backwaters, the Waterfalls, the Spice gardens, Kerala Wildlife, Kerala Ayurveda and the Kerala beaches. 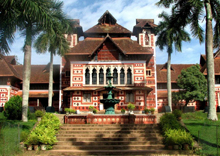 Thiruvananthapuram (Trivandrum) is the capital of Kerala. The main attractions of the city are Shri Padmanabha Temple, Sri Chitra Art Gallery which has a large section devoted to the paintings of Raja Ravi Varma, works of Rabindranath Tagore, Jamimi Roy, K. K. Hebar.

The gallery's collection also includes paintings from Indonesia, China, and Japan. Nearby tourist places to Trivandrum are Veli, Shankhumuggam and Kovalam, which is considered as the finest beach in the world and provides ingredients for an ideal holiday.

Besides swimming, there are opportunities for surfing and water skiing. more on Kerala tourism

Within hailing distance of the capital city Thiruvananthapuram, is the Veli - Akkulam lagoon with a delightful waterfront park that is increasingly becoming popular among the natives and tourists alike.

Only a narrow sandbar separates the lagoon from the sea. You can opt for rides in motor-driven safari launches, power boats, pedal boats or row boats. Kayaks and hovercraft attract the brave-hearted. A floating bridge and a floating restaurant add to the overall excitement. The eastern end of the lake is flanked by two scenic hillocks coming through as a perfect hiking ground.

At Periyar Wildlife Sanctuary you can see the natural habitat of elephants, the tiger, deer, wild pigs, and tigers. more on Periyar

Munnar is located in the eastern part of the state of Kerala, in Idukki district that borders Tamilnadu State. It is famous for tea gardens and spices. The weather in Munnar is pleasant. Summers (April-June) are mild, while winters (November-February) are cool. It experiences heavy southwestern monsoon rains in June-August. more on Munnar

The sweeping network of canals, honey-combing the town of Alleppey (Alappuzha) has earned for the place its sobriquet - "The Venice of the East." Small, low-slung country boats are the taxis of this water land.

It is a heart-warming sight to see them carry a motley assemblage of cycles, goats, fisherwomen with cane baskets, school children, toddy-tappers with their knives and pots, duennas in white with gold earrings, Syrian Christian priests and a bare-chested boatman apiece. 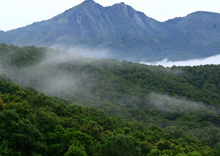 The Silent Valley National Park is situated in the Palghat (Palakkad) district. The park is surrounded by the Attappadi Reserve Forests in the east, and the forests of the Palghat and Nilambur divisions in the west and south.

In the North, the park is an extension of the Nilgiri Forests.

The park has a strong wild life population with a variety of animals such as elephant, tiger, lion-tailed macaque, gaur, wild pig, panther and sambar.

Some other species of wildlife have also been recorded here including 15 species of invertebrates, two fishes, and two amphibians.

Parambikulam, Choolanur Peacock Sanctuary, Attappadi or Mountain Valley, and JP Smriti Vanam are the other tourist places in the vicinity of the park.

Bolgatty Palace is one of the oldest existing Dutch Palaces outside Holland. A Dutch trader built this mansion in 1744. The palace was leased to the British in 1909 and it served as their residency till 1947 when the British Rule came to an end in India. The Bolgatty Island is a short but inspiring boat ride away from Kochi.

Tourist places in and near Kottayam are:-
Peermed, an inviting hill resort at an altitude of 1066 meters. Vaikom Temple, associated with the legendry Parasurama. This temple also depicts the typical Kerala temple culture.

Kumarakom, where you could sail the backwaters in rented houseboats that are simply furnished with a living room, a bedroom and a bath, together with a raised central platform creating a private sit-out for the passengers. Sections of the curved roof of wood or plaited palm open out to provide shade and allow uninterrupted views. Boat trains - formed by joining two or more houseboats together - make for a convenient mode of sightseeing when the company is large. You could even take a canoe out into the quiet lagoons and spend time angling.

Make sure you sample Karimeen and fresh Toddy - the favorite fresh-water food and the local wine. more on Kumarakom 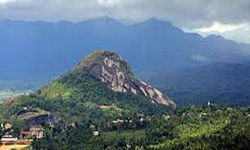 In Kerala Archaeological treasures, Edakkal Caves are the two natural caves existing in a distant location called Edakkal in Wayanad district, 25 km from Kalpetta in the Wayanad district of Kerala in India's Western Ghats.

They lie 1,200 metres above sea level on Ambukutty Mala, beside an ancient trade route connecting the high mountains of Mysore to the ports of the Malabar Coast. These caves have distinct place among archaeological sites of India because of its Stone Age carvings which are rare and unique.

Edakkal simply indicates 'a Stone in between'. Edakkal is located at a place 25 km from Kalpetta of Wayanad district situated along the Western Ghats. These caves lie 1,200 metres above the sea level in the mountainous range of Ambukuththi Mala. This place was an ancient trade route between the high mountains of Mysore and the ports of the Malabar Coast.

The rock etchings of Edakkal Caves belong to prehistoric period and these engravings are the subjects of study by archaeologists and historians around the globe. There are at least three particular groups of petroglyphs, which the investigators rely upon for sign of inhabitation in these caves that ought to have happened much before 5000 years. 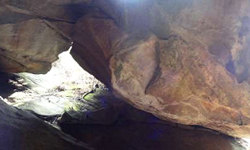 The symbolic writings found in these caves that are supposed to date back to a period before 6,000 BC. It was found in reports that they ought to have existed even at the times of Neolithic man, because they specify the culture of a prehistoric civilization and matters relating to settlement of those days in this region.

Edakkal portray the formation of the cave by a stone in between with a heavy boulder straddling a fissure in the rock. The cave is formed in two levels, the lower chamber measuring about 18 feet in length and by 12 feet in width, also 10 feet in height.

One can enter the cave through the opening which is of 5 x 4 feet size. The upper level can be reached through a passage opposite the entry point upward by one climbing up the steps.

This storey has an interior of about 96 feet long, 22 feet wide and 18 feet high. Tourists can see the interior because of the light entering the cave through the big gap in the right-hand corner at the top where the boulder keeps apart from the wall.