A typical Bihar wedding is an amalgamation of rustic flavour, traditional rituals and a series of protocols that have to be followed by both families till the culmination of the elaborate processes of marriage.

Traditions of wedding of Kayastha

In earlier times, the wedding used to take place over a month and was observed as a long winding festival by the families of the groom and bridegroom. But given the constraints of modern time, the duration has shrunk, but the customs and rituals are still being observed in every Hindu household. 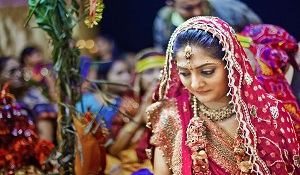 A sacred fire (havan) is lit on the occasion and is kept lighted throughout the intricate proceedings of the marriage ceremony.

Formal engagement: On an auspicious day chosen after consulting the astrologer, either 7,9 or 11 members accompany the groom on a visit to the bride's house with gifts like jewels, clothes and sweets.

The bride and groom exchange rings to formalise the engagement before marriage and the next day, bride and her families repeat a similar ritual and pay visit to groom's place. This exchange of visit and rings between the bride and groom is termed as Cheka.

Bride beautification: The groom's mother along with married ladies (suhasinis) grind turmeric into a soft paste which is then sent to the bride's house for her to apply on the body as part of beautification process called ubtan ceremony.

Usually, the womenfolk sing traditional and popular songs during the grinding of turmeric creating an air of festivity.

Similar ceremony also takes place at the bride's house. This entire beautification ritual of the bride is called Haldi Kutai.

Further, the groom's attire for the wedding and the turmeric paste grounded by the bride's mother are offered during this ceremony.

An air of camaraderie prevails as the bride's brother is accompanied by an accountant, barber, laundryman and other servants.

After a lavish dinner, the brother is given a formal send-off along with gifts for the bride's family, the special bridal attire, nath (nose ring) and maang tikka (part of bridal jewellery worn on forehead).

Setting up pandal: A traditional mandap (pandal) is set up for the wedding mostly in the courtyard. Generally made of bamboos and decorated with mango leaves and banana trees, this Mandappachadan is not much in vogue today with onset of modern system of creating facade with decorative lights and large canopy.

However, in traditional house, at least five married men create the elaborate pandal with harish (a symbol of good agriculture) made of wood in the centre of the mandap.

Turmeric ritual: An auspicious day is chose from the haldi ceremony that takes place in both the bride's and groom's houses.

The turmeric paste that has been presented from both the respective in-law's houses are smeared on the bride or groom by married ladies amid lot of cheers and teasing. This haldi ritual is repeated on the morning of the wedding day.

Seeking the blessings of elders, ancestors: The twin rituals called Dhritdhaari and Matripoojan are performed to seek the forgiveness and blessings from the ancestors as well as the elders respectively at both the bride's and groom's households.

The parents of the bride and the groom offer paun pooji (clothes or cash) to propitiate those dead ancestors as well as elders to seek their blessings for the bride and groom.

Rice grinding ritual: At the dawn of the wedding day, the groom's mother supervised by her mother-in-law or any elderly married woman grinds rice wrapped in a shawl (chunni) on a flat stone to seek the blessings from the gods and elders for a trouble free wedding.

She is also accompanies by other woman relatives in this rice grinding process called silpoha.

Warding off evil eyes: The groom's maternal uncle (or aunt) advises him to keep away from vice or evil habits and performs ritual to ward off bad omen termed Imli Ghutai.

The uncle (or aunt) then gives a betel nut which the groom holds with his teeth and his mother takes it away only to eat it herself in a symbolic gesture that she will take away all evil aspersions cast on her son and rather put up with than pain.

Finally, the groom is gifted with clothes by his uncle or aunt as token of appreciation.

Aarti for groom: As part of the auspicious start, groom's mother performs aarti, puts a tilak on his forehead before the party leaves for the marriage venue.

She prays to god that the marriage is done without any hassles and the couple live a long and happy life together. The mother blesses her son for a great beginning of a married life and this ritual is called Paricchavan.

Decorated caravan: In a well decorated, bright car the groom is taken around and he is accompanied usually by sahwala (mostly his younger brother). He is followed by his family and large numbers of relatives as a big, colourful procession called Baraat Prasthaan.

At the wedding venue, the groom's family is greeted and garlanded by the bride family. Meanwhile, the groom seated in the car is welcomed by the priest who applies tilak and guides him out of the car.

Taking the initiative further, the bride's father then escorts him to the wedding venue.

Exchange of garlands: Having brought to the marriage venue, the bride performs aarti for the groom and they both change garlands often called Jaimala much to the cheers and loud applause of the large gathering of relatives.

Betel leaves, lamp & cow dung: The bride's mother along with other married ladies performs the Galsedi ceremony. Here she a plate having a small lighted lamp, betel leaves and lumps of cow dung.

In a sequential order, women heat the betel leaves on the lamp and smear the residue on the groom's face, forehead and eyes during which time they use their left hands at least five times each.

Also, they throw cow dung behind the groom as part of a custom.

New wrist band for couples: Usually, the bride's brother (or brother-in-law) escorts the groom to the altar and he is joined by bride in a yellow silk sari without any jewellery.

The priest ties the bracelets made of mango leaves, cotton thread, coloured rice, turmeric and money on the couple's right hand which they have to wear for the next four days. The barber on the altar cuts the fingernails and toenails of the couple in this elaborate ritual called Kangna bandhana.

Bride donation ceremony: The bride's father, mother, the groom and the bride place the palm of their right hand one above the other. Also, the bride will be holding a conch.

At the same time, the priest recites mantras during which time, the bride's parents give away their daughter to the groom in a Kanyadaan ceremony.

One the ceremony his over, the groom returns to his rest room and the bride gets dressed up for the kanya nirakshan as part of which she is introduced to the groom's relatives.

With head covered in handkerchief or a big cap, the duo bless the bride, gifts her saris and lehengas in a ritual called Bhaisur Nirakshan. She finally gets the entire set of family jewellery given by her mother-in-law.

Worship of family deity: Now with a new sari and jewellery, the bride renters the altar for a series of pujas on the family deities called the Kuldevta ki puja along with groom.

The couple take a number of vows and priest invokes the planetary bodies including the sun, moon, stars, earth and sky to witness the union of two souls.

Circumambulation of sacred fire: As they encircle the sacred fire, the bride gently throws lave (roasted husked rice) into the fire from a soop (a three-sided conical cane basket) she holds. Her brother refills the soop from time to time. This ritual is called pheras.

After this ritual is over, the groom now applies sindoor on the bride's forehead, starting from the topmost point of her nose to the parting of her hair. This action is repeated five times even as the bride keeps her eyes closed during this act.

Finally, the groom ties the mangalsutra (also known as taagpaag) around the bride's neck to end the wedding rituals and the newly married couple retire to the decorated bridal chamber.

Early bath, dressing up: The day after the wedding, the couple is escorted out for bath and dressing up for a number of engagements in a ritual called Kohwar Parikshan. The married women inspect the bed to check for signs of marriage consummation.

Cash and gifts: After the meal, the elders offer gifts either in the form of cash or kind to the groom called Salami. The groom seeks permission for going to his house with his wife. Befitting Farewell: The bride's brother accompanies the newlyweds to a bedecked car. The family members and relatives shower flowers and coloured rice on them as part of Vidaai ritual.

In order to ward off evil eyes and bad omen, the car moves forward and backward thrice before taking off to the groom's house.

Finally at home: Welcoming the newlywed, the womenfolk at the groom's family performs aarti (Swagat aarti) and showers them with flowers and akshat (rice).

The groom's sister places a rice filled copper vessel, a plate of alta (a red coloured water) and two cane baskets on the path of the couple.

Finally, she places both her feet in the cane baskets after which the bride is taken to the bedroom (kohwar). The groom has to pay cash to his sister to gain entry to the house with his new bride.

Bride gets cash, gifts: Like what Salami is for the groom at the bride's house, Mooh dikhai is for the bride at the groom's house as she gets a pair of gold bangles from her mother-in-law, apart from other valuable items.

Thanksgiving puja: In order to mark the culmination of marriage proceedings a thanksgiving puja with a Satyanarayan Katha was observed and this ritual is termed Chauthari.

An expression of gratitude is shown to gods for making the entire wedding festivities a grand success without any hassles.

Handing over household keys: This final ceremony termed chauka cchulai is held for two reasons. The groom's mother hands over the keys to the grocery room (bhandar ki chhabi) to the new bride.

Second, to test the cooking skills of the bride. Generally, five dishes are prepared by the bride which are tasted by the mother-in-law and other elders. They bless her with gifts and jewellery.