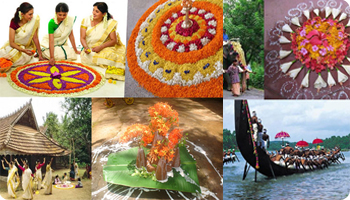 Onam is the biggest festival in the Indian state of Kerala. Onam Festival falls during the Malayali month of Chingam (Aug - Sep) and marks the homecoming of legendary King Mahabali. It signifies the sacrifice made by the great king and his devotion to God and his ultimate redemption. Onam is a celebration of Ten days.

Onam is celebrated in the beginning of the month of Chingam, the first month of Malayalam Calendar (Kollavarsham). This corresponds with the month of August-September according to Gregorian Calendar.

A flower carpet called 'Pookalam' is laid in front of every house to welcome the advent of the vanquished king, and earthen mounds representing Mahabali and Vishnu are placed in the dung-plastered courtyards.

The Pookalam would be decorated with a variety of courful and fresh flowers and the artistry is done with wonderful touch and accuracy. Traditional rituals are performed followed by a lavish feast called 'Sadhya'. Traditional vegetarian Kerala food is served on banana leafs.

One of the main attractions of Onam, is the 'Vallamkali' or boat races of Karuvatta, Payippad, Aranmula and Kottayam. Hundreds of oarsmen row traditional boats to the rhythm of drums and cymbals. These long graceful Snake Boats called 'Chundans' are named after their exceedingly long hulls and high sterns that resemble the raised hood of a cobra. The rowers row with poetry like precision to the beat of the drums and the rhythm in motion is a sight to behold.

Although this festival has its origin in Hindu mythology, Onam is for all people of all class and creed. Hindus, Muslims and Christians, the wealthy and the downtrodden, all end up celebrating Onam with equal joy and fervor.

The secular character of Onam is peculiar to this land where unity had always coexisted with diversity, especially during festivals, when people come together to celebrate life's unlimited joys.