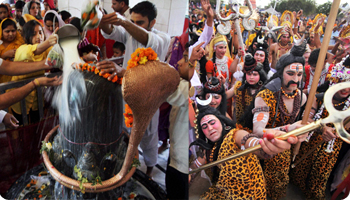 The festival of Mahashivaratri falls on the 13th or the 14th night of the new moon during Krishna Paksha in the Hindu month of Phalgun. Krishna Paksha means the period of waning moon. Phalguna corresponds to the month of February - March in English Calendar. Shivaratri Festival is celebrated on a moonless night.

Festival of Mahashivaratri is the one of the most important festival for millions of devotees of Lord Shiva. The festival has been accorded lot of significance in Hindu mythology. It is said that a devotee who performs sincere worship of Lord Shiva on the auspicious day of Shivratri is absolved of sins and attains moksha.

According to our mythological texts, during the great mythical churning of the ocean called Samudra Manthan, a pot of poison emerged from the ocean. The gods and the demons were terrified as it was felt it would poison and destroy the whole world. When they all approached Shiva for help, he in order to save everybody, drank the deadly poison but held it in his throat instead of swallowing it. This turned his throat blue, and since then he came to be known as 'Nilkantha', the blue-throated one. Shivratri celebrates this event by which Shiva saved the world.

Shivarathri is considered special for women. Married women pray for the well being of their husbands and sons, while unmarried women pray for an ideal husband like Shiva. . Further more it is believed that anyone who utters the name of Shiva during Shivratri with pure devotion is freed from all sins. He or she reaches the abode of Shiva and is liberated from the cycle of birth and death.

The devotees keep fast all day and chant various mantras including the sacred Panchakshara mantra "Om Namah Shivaya". They then make offerings of flowers and incense to the Lord amidst ringing of temple bells. They maintain long vigils during the night, keeping awake to listen to stories, chants and bhajans. The fast is broken only the next morning, after the nightlong worship.