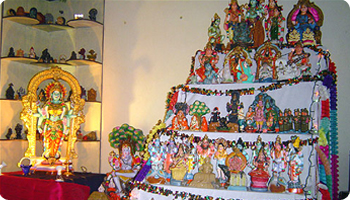 Durga Puja is mainly held in eastern parts of India and Goddess Durga worship is also performed in North India. In North, West and Southern parts of India, Navratri is held during the period.

The ninth day is observed as Ayudha Puja. This method of celebrating Navratri is more popular in South India, especially in Karnataka, Andhra Pradesh and Tamil Nadu. t the end of the festive night the flowers are distributed as Prasad for the devotees.

The Dasha Maitrikas (the 10 sisters of Goa) of the Saraswat Brahmins are taken out to worship - namely, Shantadurga, Aryadurga, Mahalasa, Katyayani, Mahamaya, Kamakshi, Vijayadurga, Bhumika, Mahalakshmi and Navadurga.In South India, people set up steps and place idols on them. This is known as golu.