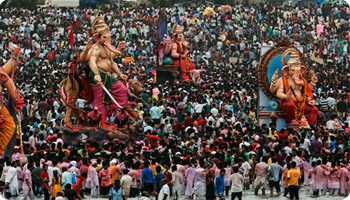 Ganesh Chaturthi - also known as 'Vinayak Chaturthi' or 'Vinayaka Chavithi' is celebrated by Hindus around the world as the birthday of Lord Ganesha.

It is observed during the Hindu month of Bhadra (mid-August to mid-September) and the grandest and most elaborate of them, especially in the western India state of Maharashtra, lasts for 10 days, ending on the day of 'Ananta Chaturdashi'.

A life-like clay model of Lord Ganesha is made 2-3 months before Ganesh Chaturthi. The size of this idol may vary from 3/4th of an inch to over 25 feet. Many parts of the city have very huge statues of Lord Ganesha made for the festival.

During the time of the festival, it is placed on raised platforms in homes or in nicely decorated outdoor tents for people to view and pay their homage. The priest, traditionally attired then chants manthras that signify coming to life of the statues.. This ritual is called 'Pranapratishtha'.

After this comes the the 'shhodashopachara' (which is basically16 ways of paying tribute) and they are as follows. Coconut, jaggery, 21 'modakas' (rice flour preparation), 21 'durva' (trefoil) blades and red flowers are offered.

The idol is anointed with red sandal paste (also known as rakta chandan). Throughout the ceremony, various bhajans and slokas that sing praise of Lord Ganesha are sung by the devotees.

For 10 days, from Bhadrapad Shudh Chaturthi to the Ananta Chaturdashi, Ganesha is worshipped. On the 11th day these statues are then carried out on the streets to be immersed in the sea after ten days.

Thousands of processions all congregate on the beaches to immerse the holy idols in the sea. This procession and immersion is accompanied by drum- beats, devotional songs, chanting and dancing.

Ganesh Chaturthi holds utmost significance among the followers of Lord Ganesha. Lots of preparations are made to celebrate this auspicious occasion. Apart from being an important festival, Ganesh Chaturthi has also become a very important financial activity. Thousands of artists & small and medium industries eagerly wait for this mega festival to get orders for making many statues of Lord Ganesha.