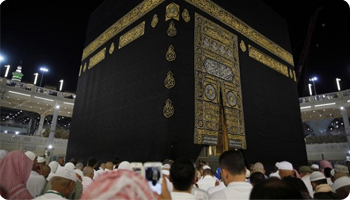 Is the Festival of Sacrifice. Eid Al-Adha begins on the 10th of Dhu'l-Hijja, the last month of the Islamic calendar, and lasts for four days. It begins the day after Muslims on the Hajj descend from Mount Arafat.

The underlying flavorof Bakrid is the spirit of sacrifice or Qurbani. This commemorates Prophet Abraham's great act of faith many centuries ago. Almighty God put Prophet Abraham under a most difficult trial. During this day, men, women, and children are expected to dress in their finest clothing. For the millions at Hajj pilgrimage, it is a big day. On this day, the pilgrims reach the grounds of Mina where they will sacrifice an animal. It was here that Prophet Abraham is believed to have attempted to sacrifice his son Prophet Ishmael. Muslims then undertake animal sacrifice, to commemorate to Allah's command, and Allah's mercy in substituting a ram for the child. The pilgrims then shave their heads.

The charitable qualities of the Muslim community can be seen during during Eid ul-Adha.They make it a point to see to it that no impoverished Muslim is left without sacrificial food during this day. Coming immediately after the Day of Arafat (when Prophet Muhammad pronounced the final seal on the religion of Islam), Eid ul-Adha gives concrete realization to what the Muslim community ethic means in practice.