How Christmas is celebrated in India 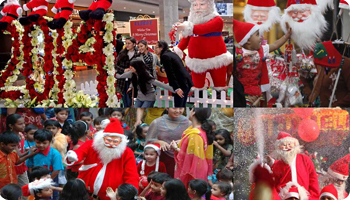 Christmas festival, which marks the birthday of Jesus Christ, is celebrated in almost all parts of the country with lot of pomp and gusto. It is a national festival, even though Christian population is only about 2.3 percent in India. One of the legacies of the British rule is; Christmas is called 'Bara Din' or Big Day, and on this day the entire country is in a festive mood.

The Christmas celebrations in the cities of India is almost a replica of the global culture that is associated with Christmas festival, but in the rural heartland, one of the special features of Indian Christmas celebration is that instead of having traditional Christmas Trees, a banana or mango tree is decorated and kept in the house. As many cannot afford Christmas tree and it is also not readily available some people use mango leaves to decorate their homes.

In the cities on the Christmas Eve, many Christian homes hang out giant paper lanterns, in the shape of stars, on top of their houses and as one walk down the road, the stars float above you in rows. Churches in India are decorated with flowers and colorful lights on this day and there are special candles lit on the entrance door of the churches on the Christmas Eve.

Midnight Mass service at the churches is a very important service on this day and the Christians especially the Catholics attends it wholeheartedly. Before the midnight approaches, the whole family will walk to the midnight mass and after the service is over, the church bells will ring to announce that Christmas Day has arrived.

Midnight Mass service at the churches is a very important service on this day and the Christians especially the Catholics attends it wholeheartedly. Before the midnight approaches, the whole family will walk to the midnight mass and after the service is over, the church bells will ring to announce that Christmas Day has arrived.

People greet each other 'Merry Christmas' some in English and others in different languages that are spoken in India. This is followed by a massive feast of different delicacies and the giving and receiving of presents continues throughout the day that follows.

India's smallest state, Goa which is on the west coast has about 26% Christian population. People here like to go carol singing around their neighbors for about a week before Christmas. Christmas Trees are put up in every Christen house. The Christmas cake is baked with traditional rich fruit and lots of local sweets are also made for the Christmas festival in Goa.

In north-west India, the tribal Christians of the Bhil tribe, go out night after night for a week before Christmas to sing their own carols and they do so in their own language. They go to surrounding villages singing to people and telling the Christmas stories and this goes on the whole night.

In Southern state of Kerala where there are 22% Christian population. Like Goa, here too Christmas is celebrated with religious fervor. Traditional Catholics fast from 1st to 24th of December, until the midnight service. Every house is decorated with new variety of Christmas stars and well decorated Christmas tree. Some Christians put small oil burning clay lamps on the roofs of their homes to show their neighbors that Jesus is the light of the world.

The northwest states of India like; Manipur, Meghalaya, Nagaland and Mizoram have high populations of Christians. Over 5.3 million Christians live in Mizoram, Nagaland, Meghalaya and Manipur while there are a significant number of Christians in the other northeastern states like; Tripura, Assam, Arunachal Pradesh. Here Christmas is celebrated with its own local flavor which is more tribal in nature. One of the special features of the Christmas celebration here is Christian customs are mixed with the individual tribal customs.

There are much more unique features about Christmas celebration in India.