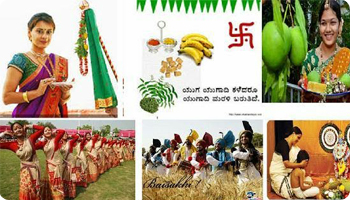 Importance of Ugadi and Baisakhi Festival

In the festival day they decorate their houses with mango leaves and 'rangoli' designs, and pray for a prosperous new year- 'Panchangasravanam' as priests make predictions for the coming year. In Maharashtra, it is reminiscent of the valiant Marathas returning home from their successful expeditions of war. They honour their favourite leader, Chatrapati Shivaji Maharaj. A gudi (banner) with a swastika -marked metal pot and silk cloth is raised to announce victory and joy.

On this day, people from Andhra Pradesh wake up before dawn and take special showers called (Mangala Snaanaalu) and prepare and eat a special sauce called Ugadi Pachchadi (sauce). This sauce is made of a paste out of tamarind and also contains mango, jaggery, pepper, neem flowers and salt etc, representing all tastes, that symbolizes experiencing all all the feelings in one's life.

Later, people gather at temples and listen to the recitation of the calendar (Panchangam) and the forecast of the future by the Brahmin priests. Ugadi day celebrations are marked by paying homages to arts by having literary discussions, poetry recitations (kavi sammelanam) and recognition of authors of literary works through awards and the cultural programs continue for two weeks merging with the celebrations of Lord Ram. 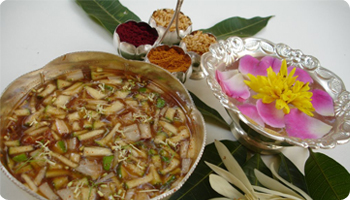 The prasad of Ugadi/Gudi Padwa is the bitter leaves of the neem tree with jaggery. There are special foods prepared for this festival. In the southern states, puligore-a sour tamarind rice dish, bobbatlu, holige- a sweet stuffed bread and Ugadi Pachadi made of jagerry, raw mango pieces, neem flowers and tamarind is prepared. In Maharastra, shrikhand -a fragrant yogurt dessert , with poori-a fried puffy bread is prepared.