Mobile phones are widespread and approachable to common people. These are extensively used by individuals at global level since 1990s.

Though it is a wonderful gift of technology advancement, many researchers found that there are some long-term health effects of mobile phones during pregnancy. 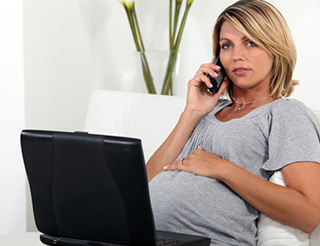 Many experts claimed that radiation from mobile phones adversely impact in the brain development of unborn babies. Several studies have found a promising connection between babies exposed to mobile phones in the uterus (womb) and behavioural problems, such as hyperactivity during childhood.

Pregnant women who use mobile handsets just two or three times a day raise the risk of their babies developing hyperactivity and difficulties with conduct, emotions and relationships by the time they reached school age and there may be high risk if the children also used the phones themselves before age 7.

Other health studies oppose above finding and revealed that there is no link whatsoever to behavioural problems. They also found no indication of developmental delays in children at six and 18 months of age.

But majority of researches indicated that mobile phones are harmful for unborn babies. There are many reasons for developing behavioural problems after birth if mother uses mobile phones in pregnancy. For example, it may be possible that if mother uses her mobile often, she may not give proper attention to her baby in general. If a baby or young child is deprived of the attention he/she needs, he/she may develop behavioural problems. Therefore it confirms that some studies found high mobile use results in later behaviour problems.

It is established that use of mobile gadgets before birth and afterward may increase a child’s risk for developing certain behavioural problems that include hyperactivity, inattention, and problems getting along with peers.

In current environment, it is difficult to avoid mobile phones. In order to protect mother and baby,

There are some recommendations: