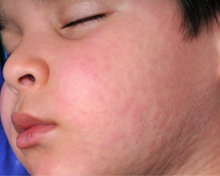 Everybody is aware of allergy as most of the people in some stage of life suffer from this disease. For common man, allergies are defined as abnormal reactions to ordinarily harmless substances.

The sensitizing substances, called allergens, may be inhaled, swallowed, or come into contact with the skin. Allergic reactions can occur in one area, such as sneezing or a skin rash or sneezing, or may include more than one symptom. When it hits on young children, it is matter of worry for mother because children do not express well the pain they are suffering from allergy. Infants get allergy mainly from food products. The most common items are milk, eggs, wheat, soy, fish and peanuts. After the age of three, children may suffer from the environmental allergies begin to have reactions to flowers, grasses and other airborne particles.

The fundamental cause of allergy is still not known. Allergy is caused by sensitive immune system, which leads to a misdirected immune reaction. The immune system of human body normally defends the body against injurious substances, such as bacteria and viruses. It reacts to substances called allergens that are generally harmless and in majority of cases, people do not cause a problem. But a person with allergies, the immune response is week. When it recognizes an allergen, it releases chemicals, such as histamines. Allergy may be due to family history. If any relative has allergy to some food, dust or anything then a person has more chances to be allergic with particular substance. Non-hereditary factors in fact play a vital role as well. There are many allergic diseases.

The most common allergic diseases are allergic rhinitis, non-allergic rhinitis, asthma, allergic dermatitis, contact dermatitis and urticaria. Allergic rhinitis is the most common of the allergic diseases and the main focus of health profile. Allergens that most frequently cause problems are: pollens, mold spores, house dust mites, foods, insect bites or stings, plants, insect spores, latex rubber, viruses, bacteria, medications and environmental conditions such as cold temperatures. Allergic reactions can also be caused by jewelry, cosmetics, and other substances. Well known symptoms of allergies are eczema, hives or other skin rashes, stomachache, headache, congestion, itchy eyes, runny nose, coughing and postnasal drip, sneezing, conjunctivitis and wheezing. Those kids who are very sensitive, their symptoms can begin as early as six months. If an infant is the victim then mother must have to watch carefully otherwise kids may get other troubled also. 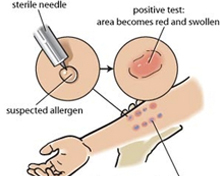 There are several methods of allergy testing. The most common methods are the skin tests, elimination-type tests, and the radioallergosorbent test (RAST). The scratch involves placement of a small amount of suspected allergy-causing substances (allergens) on the skin that is usually on the forearm, upper arm, or the back and then scratching or pricking the skin so that the allergen is introduced under the skin surface. The skin is observed closely for signs of a reaction that are usually swelling and redness of the site. Results are usually obtained within about 20 minutes, and several suspected allergens can be tested at the same time. A parallel method involves injection of a small amount of allergen under the surface of the skin and observing for a reaction at the site. Skin tests are most helpful for respiratory allergies in which the allergen is inhaled, a penicillin allergy, insect bite allergies, and food testing. Food allergies are usually tested by using various elimination diets. The suspected foods are not consumed for some period (several weeks) and then slowly re-introduced one at a time and the person is observed for signs of an allergic reaction.

Because a person might believe he or she is allergic to a certain food, a double-blind test is sometimes recommended by medical practitioners to find out if this is true. In a double-blind test, suspected foods and placebos, harmless substances, are given in a disguised form. The person being tested and the provider are both unaware of whether the substance tested in that session is the placebo or the food substance. A third party knows about it and identifies them with some sort of code. Doctor recommends an ImmunoCap test for kids who are diagnosed as allergy with something. It is the most advanced allergy test. It's particularly helpful in infants and toddlers for whom skin prick testing on the back is not reliable. In this test, a small amount of blood is taken and sent to the lab where levels of IgE antibodies are measured for specific antigens (the agents that cause the allergy symptoms). This test may also be done to check immunotherapy or to observe if a child has outgrown an allergy, although it can only be used in a general way; the level of IgE present does not correlate to the severity of an allergic reaction and someone who has outgrown an allergy may have a positive IgE for many years later. 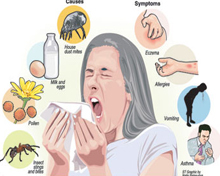 Allergy is not life threatening disease. It can be cured through lifestyle, good diet and medication. There are three common methods of treatment of allergic diseases: avoidance of the allergen, medication to relieve symptoms and allergy shots. In avoidance method, wear a pollen mask when mowing the grass or housecleaning, stay indoors in the morning when the pollen count is at its highest and on windy days, read and understand food labels. It is for people with food allergies. Person must keep windows and doors closed during heavy pollination seasons. Use the air conditioner in the house and car. Rid the home of indoor plants and other sources of mildew. Don't allow dander-producing animals in the house. Change feather pillows, woolen blankets and clothing to cotton or synthetic materials. When avoidance or control of an allergen does not work, medications may be taken with doctor's advice. Common allergy medications are: Decongestants: administered via spray or orally to unclog nasal passages. Steroid nasal sprays: administered via spray to mute the inflammatory response. When avoidance and environmental control measures and medications become unsuccessful to control allergy symptoms, the doctor may advise allergy immunotherapy. Immunotherapy involves the injections of allergen extracts to desensitize the person. Enclose mattress, box springs and pillows in plastic barrier cloth. For treating allergy, it is necessary to have deep knowledge and patient must visit to doctor at right time. If there is delay in treatment, it can have dangerous outcomes.