Dengue is a worldwide health concern and recently it broke out in Indian terrain. News reports indicated that in Delhi, condition is worse due to this fatal disease. Dengue is an acute viral infection with potential deadly complications. Dengue Fever is a viral infection that's carried by mosquitoes and causes fever, body pains, joint pain, and rash. It spreads by the tiger mosquito (AedesAegypti), which has black and yellow stripes and typically bites in the early morning or at dawn.

Dengue virus belongs to family Flaviviridae, which has four serotypes that istransmitted by the bite of infected Aedes mosquitoes.Aedesaegypti is a small, dark mosquito that can be recognised by the white bands on its legs and a silver-white pattern of scales on its body that resembles like an ancient Greek musical instrument called lyre. These mosquitoes are found in tropical and subtropical regions all over the world, mainly between the latitudes of 35°N and 35°S where the winter temperature is not colder than 10°C.

Reports signified that in India, the first epidemic of clinical dengue-like illness was recorded in Chennai in 1780 and the first virologically proved epidemic of dengue fever (DF) occurred in Kolkata and Eastern Coast of India in 1963-1964. Since then, team of physicians have treated and defined dengue disease in India, but the scientific studies addressing various problems of dengue disease have been carried out at limited number of centres.

According to the WHO 2009 report, dengue fever is divided into two groups such as Uncomplicated and severe, though the 1997 WHO classification is still widely used. The 1997 classification divided dengue into undistinguishable fever, dengue fever, and dengue haemorrhagic fever.

There are four main characteristic manifestations of dengue illness:

It is estimated in health reports that approximately 390 types dengue infections occur worldwide each year, with about 96 million resulting in illness. Most cases occur in tropical areas of the world, with the greatest risk occurring in:

The dengue virus is transmitted through a human-to-mosquito-to-human cycle of transmission. Normally, four days after being bit by an infected Aedesaegypti mosquito, a person will develop viremia, a condition in which there is a high level of the dengue virus in the blood. Viremia stays for roughly five days, but can last as long as twelve days. On the first day of viremia, the person usually do not exhibit symptoms of dengue. Five days after being bitten by the infected mosquito, the person develops symptoms of dengue fever, which can last for a week or longer. 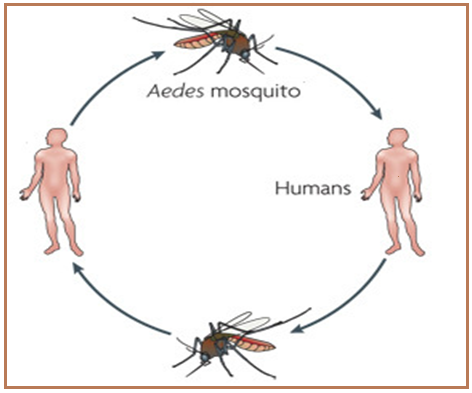 Many people, particularly children and teens, may exhibit no signs or symptoms during a mild case of dengue fever. When symptoms do occur, they usually begin four to 10 days after you are bitten by an infected mosquito. Symptomsmay include

Most people recover from dengue bite within a week or so. In some cases, symptoms deteriorate and can become life-threatening. Blood vessels often become damaged and dripping. The number of clot-forming cells (platelets) in pateint’s bloodstream drops. This can cause:

When patients must seek doctor’s advice: When person has recently visited a region in which dengue fever is known to occur and he suddenly develop a fever, it is recommended to visit doctor.

Dengue fever is diagnosed with a blood test and doctors can check for the virus or antibodies to it. If person become sick after traveling to a tropical area, they must inform to doctor. This will allow doctor to evaluate the possibility that symptoms are caused by a dengue infection. 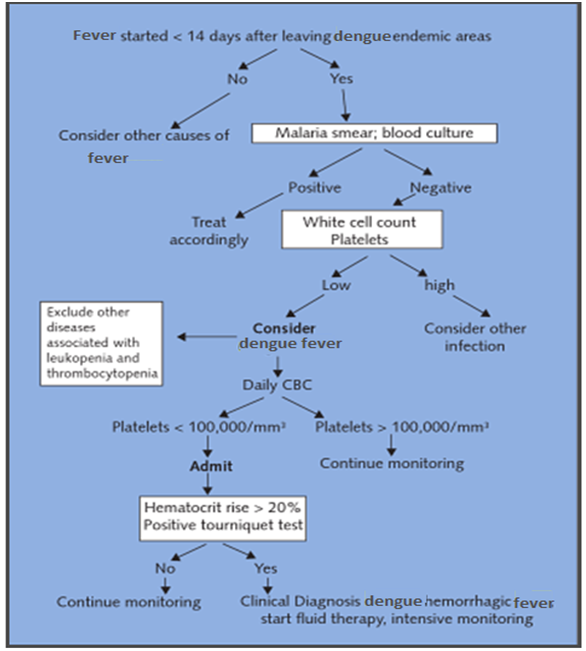 The following laboratory tests should also be performed for patients with possible dengue:

There is no precise medicine to treat dengue infection. Patient experiencing dengue fever, may use pain relievers with acetaminophen with the recommendations of doctor and avoid medicines with aspirin, which could worsen bleeding. Such patients are recommended to take rest, drink plenty of fluids, and visit doctor regularly. In case of high fever within 24 hours, and they feel worse, then they should get to a hospital immediately to be checked for complications.

If patient is suffering from severe dengue fever, he may need:

Factors that are at greater risk of developing dengue fever or a more severe form of the disease include:

If condition is critical due to dengue fever, it can damage the lungs, liver or heart. Blood pressure can drop to dangerous levels, causing shock and, in some cases, death. 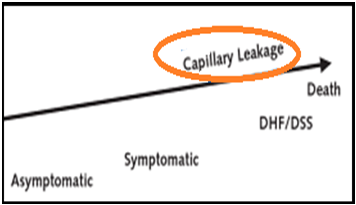 In medical science, there is no vaccine to prevent dengue fever. Therefore, people must take preventive measuressuch as to avoid bites by infected mosquitoes, particularly if they are living in or traveling to a tropical area.

Protection from this deadly disease: Medical experts recommended following ways to protect from this disease:

To reduce the mosquito population, get rid of places where mosquitoes can breed. These include old tires, cans, or flower pots that collect rain. Frequently change the water in outdoor bird baths and pets’ water dishes.

If someone in home gets dengue fever, it is important to carefully watch about efforts to protect self and other family members from mosquitoes. Mosquitoes that bite the infected family member could spread the infection to others in home.

In present year of 2015, in Indian capital of New Delhi, local authority reports showed that there are more than 477 cases of dengue fever in August, the highest number since 2010, bringing the total number of cases this year to more than 530.The All India Institute of Medical Sciences (AIIMS) and the National Centre for Disease Control (NCDC) have planned to start serological tests to classifypredominant strains of the virus this year.

According to the results, New Delhi reported over 6,000 cases of mosquito-borne diseases in 2010, 885 of them in August. "The number of dengue fever cases has increased in this year due to the increase in rainfall. This has created favourable conditions for mosquitoes to breed.

According to medical experts, though there are more number of cases, symptoms of the disease seem to be relatively mild this year. Most of the patients are suffering from fever, muscle and joint pains. This condition cannot be termed as an epidemic. It is due to seasonal changes.

In short, it can be said that dengue is a mosquito-borne viral infection. The person who got infection may show symptoms of flu-like illness, and occasionally develops into deadly complication which is termed as severe dengue. It causes fever, nausea, vomiting and muscle and joint aches. The global occurrence of dengue has grown radically in recent years.

Currently most of the countries are at risk of this lethal disease. Dengue is found in tropical and sub-tropical climates around the world, mostly in urban and semi-urban areas. Severe dengue is main cause of serious disease and even death among children in some Asian and Latin American countries.

There is no specific treatment for dengue/ severe dengue, but if it is diagnosed early and access to proper medical care, it can be controlled. Dengue fever is a possibly fatal mosquito-borne disease which mainly affects people in tropical and subtropical areas every summer. Dengue prevention and control specially depends on effective vector control measures.