One of the most fertile lands in the world, the state is divided into two unequal half by the mighty Ganges river flowing from the west to the east -- north and south Bihar plains - and a variety of cereals, crops and horticulture are grown here in this subtropical region under the temperate zone.

Located in between the humid West Bengal in the east and the sub-humid Uttar Pradesh to the west, Bihar is in a transitional position, thus deriving advantage in terms of climate and soil fertility. 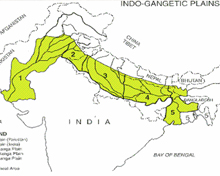 At the centre of the Indo-Gangetic plain, except the foothills of the Himalayas at the northwest, the state consists of a thick alluvial soil that is bolstered each year by the deposition of silt, clay and sand brought by streams and monsoon floods.

While potash and lime are present in abundance, there is deficiency of phosphoric acid, nitrogen and humus in the soil composition. The alluvium plains of Indo-Gangetic delta are unique to Bihar as it is drained by Ganges throughout the year.

The Himalayas a short distance from the bordering Nepal has great impact on Bihar's land formation, climate, hydrology and even its culture. While the north is capped by Himalayan range in Nepal, the central parts have small hills like Rajgir hills of tourist attractions.

The Chota Nagpur plateau to the south which was part of Bihar till 200 is now a region of newly carved Jharkhand. 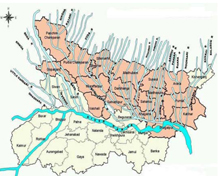 A number of rivers and streams like Ghaghara, Gandak, Baghmati, Kosi and Mahananda flow from the Himalayas and join the Ganges even as they frequently change direction marking a series of depressions and small lakes in the process.

The Kosi river is known for causing flood havoc and has been contained for now a number of small dams and embankments.

While May is the hottest month with temperatures crossing 32 degree Celsius (but not in the extreme northern region close to Himalayas), January is the coolest period with mercury touching a low of 20 degree Celsius.

The normal annual rainfall varies from about 100 cm in the west-central part of the state to more than 150 cm in the extreme north. Most rains fall between June and October, with July and August being the wettest months.