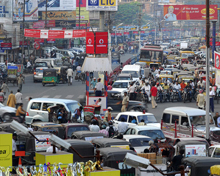 Due to constant migration from rural areas and real estate activity taking up posh areas for construction in Patna, vehicular movement has to put up with reduced space even as the numbers of two-wheelers, cars and public utility vehicles have more than tripled in recent years.

On the other hand pavements have been taken over by hawkers and roadside vendors thus creating inconvenience to pedestrians.

Everyone is law unto themselves on Patna roads or so, it seems. While a helpless traffic cop with his outdated devices tries to regulate the vehicle movement, motorists just ignore red signals at intersections without any compunction and create traffic snarls now and then.

Moreover, the filth and garbage are strewn across Patna roads in which all types of vehicles (two-wheelers, cars, SUVs, trucks and autorickshaws) ply to and from making life miserable for daily commuters using these dangerous roads.

Traffic accidents are common and road victims are mostly left in the lurch as none have the initiative to take them to hospitals.

The city is divided into Patna city and Patna, a later addition to Bihar’s capital. The Patna city is a place where the Muslim aristocracy once lived in splendour. Even now there are many buildings with gated communities reflecting a Muslim settlement of the past. 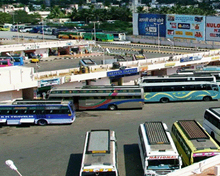 Despite well-intended efforts of the government to make Patna a city of choice, none seems to work on Patna roads as daily confusion rages on with no intervention from either traffic cops or higher officials of the transport department.

Around 25 acres of land was acquired in Pahari village, close to Patna, for the construction of an inter-state bus terminal at a cost of Rs 220 crore which is expected to decongest the town which gets thousands of buses plying services to districts and other states.

With an objective to reduce traffic jams, BUDCO has been assigned the work of installing electronic traffic light system at 87 intersections. The entire work is slated to be completed by the end of 2014-15.

Despite many recommendations on how to regulate the traffic mess on Patna roads, there is a sense of resignation and helplessness on the part of officials which does not bode well for the city which is being reshaped as a modern city interested in attracting foreign capital and businessmen.