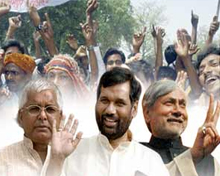 Bihar is one of the major political centres in India with as many as 40 parliamentary and 243 assembly seats. Tune in to the latest dope on electoral activities in the Bihar elections this year. Diwali will be one cracker this year for Bihar, as one party will celebrate its victory over the other. Bihar Assembly Poll News that will keep you in the loop.