Janata Dal-United (JD-U) leader Nitish Kumar, who led the Grand Alliance to victory in the assembly elections, took oath as the chief minister of Bihar for the fifth time.

Overseen by Governor Ram Nath Kovind, Nitish Kumar took the oath of office and secrecy in the name of God in Hindi at the sprawling Gandhi Maidan.

The event was attended by a galaxy of opposition leaders from across the country, including chief ministers of half-a-dozen states and former prime minister H.D. Deve Gowda.

Nitish-Lalu have huge task at hand

Now that the burning issue of 'Bihari vs Bahari' (outsiders) has been settled with the Grand Alliance scoring an emphatic win in assembly election, it will be in order for Nitish Kumar, the CM designate, to take effective control over administration.

It is also time to forget the acrimony and rancour that erupted between the JD(U)-RJD leaders and PM Modi's team during the election and revive a spirt of conviviality for the speedy growth of Bihar.

But all said and done, Nitish Kumar who has achieved a rare hatrick as CM of a divisive state like Bihar (2005, 2010, 2015) will have to muster enough politcal acumen to reign in the potential trouble-makers from the RJD camp.

The Bihar assembly election 2015 has bugled the return of RJD supremo Lalu Prasad Yadav to centre stage of national politics as his party is now the single largest entity in the new legislature.

Make no mistake, that Lalu will waste no time to take potshots at PM Modi whose hectic campaign rallies had very little impact on the Biharis who seemed put off with the tone and tenor of high-decibel rhetoric from the BJP hotheads.

What may be a cause of concern for Nitish Kumar is that his development objectives and growth vision for Bihar may take a backseat if RJD's 'rising sons' -- Tejaswi Yadav and Tej Pratap -- are going to dictate terms from the word 'go'.

However, Nitish cannot ignore the reality that he needs the back-up support from Lalu Yadav who has become a 'larger-than-life' patriarch in Bihar politics now. Besides, RJD supremo commands the support of a large voter base comprising OBCs, Yadavs, Dalits and Muslims too, if the election trend is any indication.

While caste arithmetic has once again triumphed in Bihar assembly election, one cannot fail to ignore the fact that people have voted for the development agenda that was espoused by Nitish and Co.

Nitish cannot afford to wast any moment from now onwards. People have once again voted overwhelmingly the JD(U) alliance to power in the hope that Bihar will be fast-tracked into economic and social growth by wooing investment from corporates.

The educated youth need jobs. But employment is possible only if there are proactive steps to set up industries, promote agro-based enterprises and set up educational institutions that can turn out skilled people.

Nitish knows better than anyone that much is yet to be accomplished to make Bihar a progressive state with right climate for investment across the industrial sectors.

The JD(U) chief needs to develop a strong rapport with BJP leadership at the Centre to set up a cordial network in which central funds are channelised without delay or procedural hassles from New Delhi.

Already the knives are out against PM Modi and BJP president Amit Shah for the style of campaigning with high rhetoric in Bihar polls which cost the party dearly. BJP veterans led by former president Lal Kishan Advani and others have shot off a letter calling for an internal debate and reivew of the party functioning following the poll debacle.

There are suggestions, claims, counter-claims and rejoinders from various quarters, and the top leadership is being pilloried for the dismal show at the Bihar polls.

However, credit must be given to Nitish Kumar for taking a bold initiative to forge a broad alliance with his once bitter rival RJD's Lalu Prasad Yadav which titled the scales against the BJP-led NDA.

A combination of caste arithmetic, clever campaign and development issues has made all the positive differences for the Grand Alliance. Whereas much to the chagrin of the voters, the BJP harped on sensitive subjects like beef issue, reservation and minority problems that pushed even fence sitters to the Nitsh camp.

It will be do a world-of-good for Modi-Shah duo if they earnestly work on course correction and redirect the party for the cause of national progress with a healthy democracy. 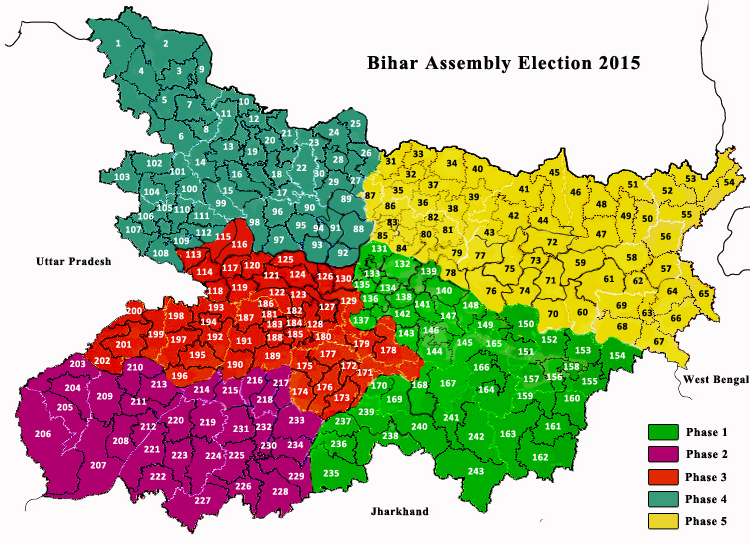 The JD (U) is major political party which is dominant in Bihar and Jharkhand. The party developed after the merger of the Janata Dal’s Sharad Yadav faction, the Samata Party, and the Lok Shakti Party on October 30, 2003. The JD (U) had a 17-year-old coalition with central political party, namely Bharatiya Janata Party and was an important constituent of the BJP-led National Democratic Alliance (NDA).

Nonetheless, it separated from the BJP for inspiring Narendra Modi as NDA's Prime Ministerial candidate in 2013. The three philosophicaldoctrines of Janata Dal (United) are secularism, integral humanism and socialism. Sharad Yadav is the president of the party. The JD (U)'s election symbol is arrow. The party grabbed 20 seats in the 2009,Lok Sabha elections, while it could manage a mere two seats in 2014.

The RJD has immense political base in Bihar and was founded by Lalu Prasad Yadav in 1997. This party works on caste and religion based ideology, Muslims and Yadavs are its main voters. The basic philosophical tenets supposedly followed by the party are values of social justice, secularism, and fairness. Mr.Lalu Prasad Yadav was the Chief Minister of the state as well as he also known as successful Railway Ministers of India. To actively participate in the Bihar assembly election of 2015, the RJD started the Parivartan Rally. Lalu Prasad Yadav is the chairperson as well as the leader of the party in Lok Sabha. In the 2009,Lok Sabha elections, the RJD grabbed only four seats and same in 2014 election. The election symbol of the party is lamp.

The BJP has done good work in Bihar and has substantialpowerto attract voters presently. It is due to fame of Mr. Narendra Modi who did splendid work in the arena political affairs. Bihar BJP's state president is Mangal Pandey. The General Secretary of the Bihar BJP is Dharmendra Pradhan, who is also an MP. The front organisations of the BJP are the Bharatiya Janata MazdoorMorcha, the KisanMorcha, the Minority Morcha, the MahilaMorcha, the S.C. Morcha, the S.T. Morcha and the YuvaMorcha. BJP chief Amit Shah and Union Home Minister Rajnath Singh started major campaign for the 2015 Assembly elections in Bihar with a super rally of volunteers at Gandhi Maidan, Patna. Shah tried to persuade the public of the state by remembering former chief minister Karpoori Thakur on Dalit icon Ambedkar’s birth anniversary.

It was observed in 2014 election, that The BJP has persuaded the Dalits, Mahadalits and the most backward castes. The BJP’s success in Bihar election 2015 will depend on votes of the backward caste.

It is regulated by Ram Vilas Paswan. The party was established in 2000 when Paswansplited from Janata Dal (United).

This party was established by Former Chief Minister of Bihar Jiten Ram Manjhi, who separated from JD (U) following his resignation. The various political parties in Bihar exercises various transformations and grouping to make it to the political outcome that may be the most Bihar include the Bhartiya Janata Party (BJP), the Indian National Congress or Congress. Other state or national parties such as the BahujanSamaj Party (BSP), Communist Parties (Communist Party of India (CPI), Communist Party of India-Marxist (CPI-M) also competing in various constituencies to show their power in Bihar elections.

News reports have revealed that Rashtriya Janata Dal and Janata Dal (United) may not contest forthcoming Bihar assembly elections together under integrated Janata Parivar banner as there is a strong prospect that the unification may not be finalised.

It is analysed from psyche of voters that The Bihar voter may incline toward Mr. Nitish Kumar as Chef Minister again but Mr. Modi's fame as PM and his continued efforts can work positively. There is tough competition among these two parties.

Shakti Party won 3 seats, while the Rashtriya Janta Dal settled for 22 seats. The other parties, that were individual parties, won 6 seats in the elections.