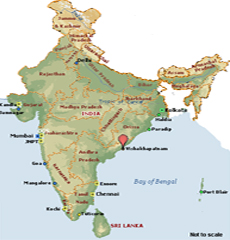 Visakhapatnam, the largest city in the state of Andhra Pradesh and the headquarters of the district of the same name, is a commercial city that makes a convenient base for exploration of many attractions in and around the city.

Vizag, as it is popularly called, is a great place for a seaside jaunt, boasting lovely beaches including Ramakrishna Beach, Rushikonda Beach, Lawson’s Bay and Bheemunipatnam Beach.

Apart from the beautiful sight of Kailasagiri Hill, one of the main attractions in the city, Araku Valley, a scenic hill station nestled in a thickly forested valley, and surreal Borra Caves are within day-trip distance from the port city of Vizag. 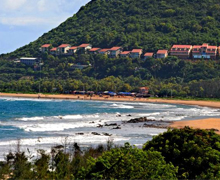 Bheemunipatnam is a maritime town in the Visakhapatnam district, through the river River Gosthani which joins the Bay of Bengal here. Apart from being one of the longest beaches in India, Bheemunipatnam Beach makes for an excellent travel base to explore the ruins of a Dutch Fort and cemetery. Bhimili Narasimha Swamy temple, Buddha Statue, St. Peter’s Church, constructed in 1864 and the Red Church are the important attractions of Bheemunipatnam also known as Bhimili. 12 km away from the Bhimili town is located Pandrangi village which is the birthplace of the revolutionary freedom-fighter, Alluri Seetharama Raju, who is known in Indian history to have led the Rampa rebellion which took place in during 1922-24 against the British. A drive to Bheemunipatnam on the Vizag-Bhimili Beach Road is a bewitching experience by itself.

One of the famous tourist attractions in Visakhapatnam, the304 mt high Kailasagiri Hill, with the blue waters of the Bay of Bengal in the backdrop, is a favoirite haunt for people of all ages. By being at this hill park you can find huge statues of Lord Siva and Parvathi, jungle trail, circular train, ropeway and flower garden. A ride on the circular train will be an experience in a lifetime. One can have a stunning view of the VIzag city from any of the seven vantage points of the Kailasagiri hill park.

A famous landmark of Visakhapatnam, Dolphin's Nose Vizag is a huge rock headland that breaks the coastline. The powerful lighthouse buit atop the Dolphin's Nose is an added attraction. 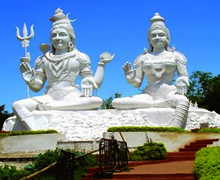 These Buddhist sites are located atop hills along the sea between Visakhapatnam and Bheemunipatnam. 20 km Northeast of Vizag, the Buddhist site of Bavikonda is home to the stupas, chaitya and viharas dating back to the period between the 3rd century BC and 3rd century AD, these structures bear testimony to the spread of Buddhism in the area near Vishakhapatnam.

One of the most famous pilgrimage sites for Hindus in Andhra Pradesh, exquisitely sculpted shrines of Andhra Pradesh, the 11th century AD Simhachalam temple is located 16 km from Visakhapatnam on the thickly forested Ratnagiri hill. During the annual ‘Chandanotsavam’ festival thousands of devotees come here to have darshan of the Lord Varaha Lakshmi Nrusimha Swamy, the presiding deity of the temple. It is during this ‘Chandanotsavam’ festival that the Lord in His original form can be seen only once in a year.

112 km from Visakhapatnam, Araku valley is a beautiful hill station nestled in a thickly forested valley of the Eastern Ghats and within day-trip distance from Vizag. Valley Resort, (Yatri Nivas) and Muyuri are top accommodation options at Araku. Located on the way to Araku from Visakhapatnam, Tyda is known for Jungle Bells nature camp which offers stunning views of the Eastern Ghats and facilities for adventure sports.

On the way to Araku Valley, you will come across Anantagiri, a scenic valley in the Eastern Ghats known for expansive stretches of coffee plantations, several waterfalls and a river. Tadimada waterfall is the most famous. Not to be missed in the Anantagiri hills are the surreal Borra Caves, home to million year old stalactite and stalagmite formations. These caves are the source of the river Gosthani which supplies water to Vizag city.

Another sacred place that is visited from Visakhapatnam as an excursion point is the Annavaram shrine. Located on the Ratnagiri hills in the East Godavari district, Annavaram is located at a distance of 124kms from Vizag.

The annual Visakha Utsav entices one million people who enjoy the wide array of cultural programmes, sports and food stalls, spread throughout the city and the region. Organized by the tourism department of Andhra Pradesh, the festival was first held in 1996. Since then, the Visakha Utsav has been gaining huge popularity. 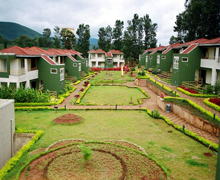 How to reach Visakhapatnam

By Rail: Visakhapatnam railway station is connected to all the major cities and places in India.

By Road: Visakhapatnam is connected by good mototrable to all the major cities and places in India.

Where to stay in Visakhapatnam

Being a large city, accommodation in Visakhapatnam is not an issue for any travelers visiting this city in Andhra Pradesh.. There is plenty of accommodation available ranging from luxurious hotels to budget hotels and rest hostels.