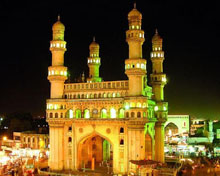 A state blessed with a number of pilgrimage centres and towns, it also has in Visakhapatnam port city a beautiful place on the coastline offering a breathtaking view of Mother Nature that includes hills, valleys, museum and parks.

Having the largest eastern coastline of 972 km in the country, the government has identified 50 beach spots that would be developed as tourist sites with all the necessary facilities and connectivity to attract both foreigners and domestic travellers.

Visakh city and its surroundings have four beach resorts, while nine more spots between Srikakulam and Nellore districts are under various stages of completion with central funding to make them into major attractions for foreign tourists.

Andhra Pradesh Tourism Development Corporation (APTDC) is the official agency that runs a number of hotels, resorts and other facilities, besides operating tour packages to offer unlimited vistas of tourist sites covering heritage, nature, adventure, health and rural landscapes in the state.

It has identified a number of tourism potential spots to be developed in order to boost inflow of both domestic and foreign visitors. Further, APTDC maintains popular resorts, religious shrines and leisure getaways like Tirupati, Horsley hills, Araku valley and scenic places in Vizag, Hyderabad and Srisailam. 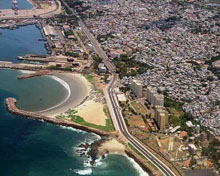 Visakhapatnam is the biggest city of the new Andhra state after the formation of Telangana in June 2014. Now being developed as one of the smartest cities of India, Vizag has a long list of attractions - Kailashgiri Park near the sea, Visakha Museum, Indira Gandhi Zoological Park, INS Kursura submarine museum, the Dolphins Nose and the Lighthouse.

With a deepest port in India, the Navy has made this city has its Eastern Command headquarters. The hill resorts like Araku Valley and Borra Caves are frequented by weekend picnickers for a brief stay and enjoy a salubrious climate over there.

The Yarada and Rishikonda beaches are clean and picturesque offering a huge spectacle of Bay of Bengal on the east.

Rich in agriculture, this city has been recognised as the Global City of the Future by McKinsey. Having been under the rule of various kingdoms of the south, it has rich cultural mix even as Krishna river flows through the city from the Eastern Ghats.

To the west of the city are jungles of Kondapalli Reserve Forests which have leopards, jackals, wolves and wild boars. A number of temples, monuments and caves witness a steady stream of visitors throughout the year. Some of the happening spots are Undavalli Caves, Mogalarajapuram Caves, Prakasam Barrage, Bhavani Island, Victoria Museum, Kondapalli Fort, Kolleru Lake and Gandhi Hill.

Literally means 'paddy place' and thus agriculture is the main occupation of its people here. Pennar river cuts the town into two half and temple architecture speaks volume of its cultural legacy as it came under the influence of Mauryas, Chola, Pallava and Vijayanagar empires among others.

Located on the banks of Ponnar river, the city has a number of places for relaxation and joyful living. Most of the visitors come here to frequent places like Horsley Hills, Kaundinya Wildlife Sanctuary, Kalavagunta, Gurramkonda Fort, Nagari Hills, Sri Venkateswara Temple, Mogili and Ramagiri. 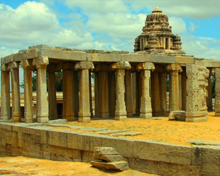 This town borders Karnataka state and has six rivers flowing through the district. It has a number of monuments, hill forts that are tell-tale structure that exemplify the ancient glory of Vijayanagar Empire. Some of the major places are Penukonda, Ravadurg Gooty Fort, Thimmamma Marrimanu, Dharmavaram, Hemavathi, Aluru Kona, Lepakshi and Raidurga Fort.

The rock paintings of Ketavaram point to the existence of human race in this oldest city since the Palaeolithic era. The town is surrounded by the parallel running mountain ranges from north to south. The place is known for sites like Kurnool Fort, Belum Caves, Nallamala Forest, Rollapadu Bird Sanctuary, Adoni Fort, Mahanandi, Kurnool Museum and Mantralayam.

Meaning "Gateway" as the town is located as the entry point to the pilgrim centre of Tirumala Hills. The town saw robust growth after deposits of uranium, a nuclear fuel, was discovered. The Bellum Caves are one of the longest such kind in the Indian subcontinent.

The name is derived from the root words for three animals (spider, snake and elephant) which, it is believed, received salvation after worshipping Lord Shiva. Here are the list of temples and popular sites in this locality: Sri Kalahasti Temple, Talakona Waterfalls Veyilingala Kona Waterfalls, Ubbalamadugu Falls, Gudimallam, Sahasra Linga Temple, Bharadwaja Tirtham and Durgambika Temple. 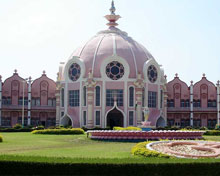 Known for its Vedic culture and purportedly founded by the Chalukyas (11th Century), the town is supposed to be the birth place of Telugu language.

River Godavari mends its way through with parks and ghats located all along its banks. And the boat cruise on this river is most sought after fun ride. Here are popular tourist draws: Papi Hills, Kadiyapulanka, Godavari boat travel, Kotilingeswara Temple, Rallabandi Subbarao Government Museum, Pattiseema, Markandeya Temple and Dowleswaram Barrage.

Positioned at the northeast corner of the state and on the banks of Krishna river, the town has one of the longest coastlines and its various beaches are also worth visiting. Besides, ancient temples and monuments are really worth a visit. 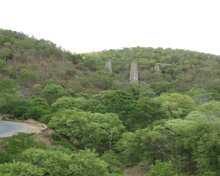 Hit by financial crunch, the state government has drawn up a number of projects to increase the revenue from tourism sector from the present 14% to 18%

The fund-starved state government, which at present gets 14 per cent of its revenue through the tourism sector, plans to increase the share to 18 per cent in the next 10 years.

Developing new tour packages, beach resorts, historical sites and green hubs are on the top of tourism department's agenda. Also, creating a tourist hub out of Bhavani island in Vijayawada is under consideration.